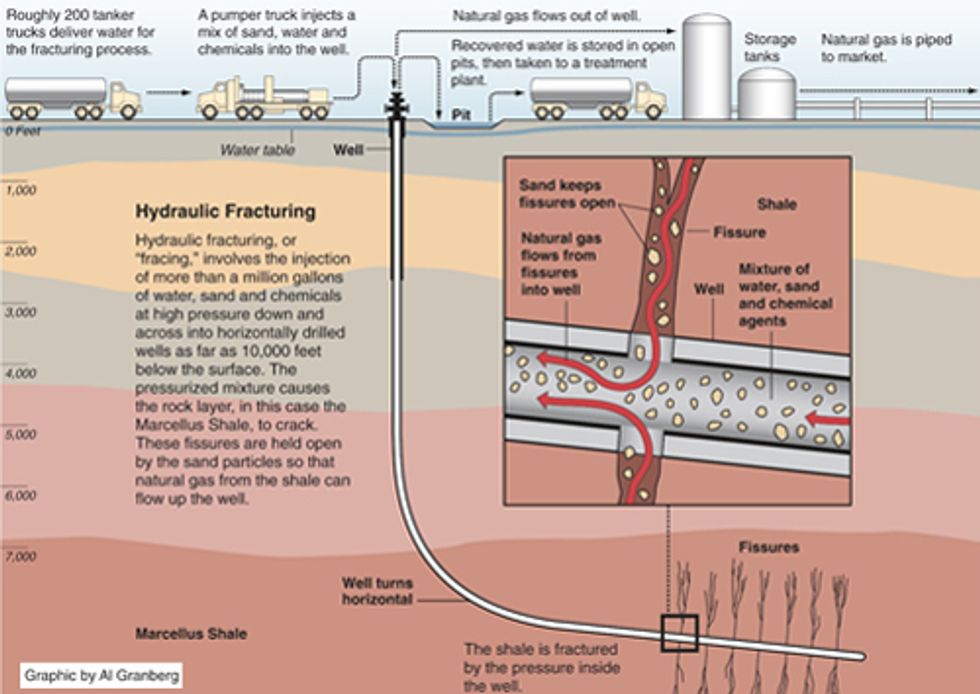 Fracking is the controversial method of forcing water, gases, and chemicals at tremendous pressure of up to 15,000 pounds per square inch into a rock formation as much as 10,000 feet below the earth’s surface to open channels and force out natural gas and fossil fuels. After drilling down vertically, the natural gas company will create a lateral borehole that will fracture the shale and rock for up to about 6,000 feet.

Advocates of fracking argue not only is natural gas “greener” than coal and oil energy, with significantly fewer carbon, nitrogen, and sulfur emissions, the mining of natural gas generates significant jobs in a depressed economy, and will help the U.S. reduce its oil dependence upon foreign nations. Geologists estimate there may be as much as 2,000 trillion cubic feet of natural gas throughout the U.S. If all of it is successfully mined, it could not only replace coal and oil but serve as a transition to wind, solar, and water as primary energy sources, releasing the U.S. from dependency upon fossil fuel energy and allowing it to be more self-sufficient.

The Marcellus Shale—which extends beneath the Allegheny Plateau, through southern New York, much of Pennsylvania, east Ohio, West Virginia, and parts of Maryland and Virginia—is one of the nation’s largest sources for natural gas mining, containing as much as 500 trillion cubic feet of natural gas, and could produce, within a decade, as much as one-fourth of the nation’s natural gas demand.  Each of Pennsylvania’s 5,255 wells, as of the beginning of March 2012, with dozens being added each week, takes up about 8.8 acres, including all access roads and pipe, according to data analysis by Nature Conservancy.

Over the expected lifetime of each well, companies may use as many as nine million gallons of water and 100,000 gallons of chemicals and radioactive isotopes within a four to six week period. The additives “are used to prevent pipe corrosion, kill bacteria, and assist in forcing the water and sand down-hole to fracture the targeted formation,” explains Thomas J. Pyle, president of the Institute for Energy Research. However, about 650 of the 750 chemicals used in fracking operations are known carcinogens, according to a report filed with the U.S. House of Representatives in April 2011. Fluids used in fracking include those that are “potentially hazardous,” including volatile organic compounds, according to Christopher Portier, director of the National Center for Environmental Health, a part of the federal Centers for Disease Control. In an email to the Associated Press in January 2012, Portier noted that waste water, in addition to bring up several elements, may be radioactive. Fracking is also believed to have been the cause of hundreds of small earthquakes in Ohio and other states.

The law, known as Act 13 of 2012, an amendment to Title 58 (Oil and Gas) of the Pennsylvania Consolidated Statutes, requires that companies provide to a state-maintained registry the names of chemicals and gases used in fracking. Physicians and others who work with citizen health issues may request specific information, but the company doesn’t have to provide that information if it claims it is a trade secret or proprietary information, nor does it have to reveal how the chemicals and gases used in fracking interact with natural compounds. If a company does release information about what is used, health care professionals are bound by a non-disclosure agreement that not only forbids them from warning the community of water and air pollution that may be caused by fracking, but which also forbids them from telling their own patients what the physician believes may have led to their health problems. A strict interpretation of the law would also forbid general practitioners and family practice physicians who sign the non-disclosure agreement and learn the contents of the “trade secrets” from notifying a specialist about the chemicals or compounds, thus delaying medical treatment.

The clauses are buried on pages 98 and 99 of the 174-page bill, which was initiated and passed by the Republican-controlled General Assembly and signed into law in February by Republican Gov. Tom Corbett.

“I have never seen anything like this in my 37 years of practice,” says Dr. Helen Podgainy, a pediatrician from Coraopolis, Pa. She says it’s common for physicians, epidemiologists, and others in the health care field to discuss and consult with each other about the possible problems that can affect various populations. Her first priority, she says, “is to diagnose and treat, and to be proactive in preventing harm to others.” The new law, she says, not only “hinders preventative measures for our patients, it slows the treatment process by gagging free discussion.”

Psychologists are also concerned about the effects of fracking and the law’s gag order. “We won’t know the extent of patients becoming anxious or depressed because of a lack of information about the fracking process and the chemicals used,” says Kathryn Vennie of Hawley, Pa., a clinical psychologist for 30 years. She says she is already seeing patients “who are seeking support because of the disruption to their environment.” Anxiety in the absence of information, she says, “can produce both mental and physical problems.”

The law is not only “unprecedented,” but will “complicate the ability of health department to collect information that would reveal trends that could help us to protect the public health,” says Dr. Jerome Paulson, director of the Mid-Atlantic Center for Children’s Health and the Environment at the Children’s National Medical Center in Washington, D.C.  Dr. Paulson, also professor of pediatrics at George Washington University, calls the law “detrimental to the delivery of personal health care and contradictory to the ethical principles of medicine and public health.” Physicians, he says, “have a moral and ethical responsibility to protect the health of the public, and this law precludes us from doing all we can to protect the public.” He has called for a moratorium on all drilling until the health effects can be analyzed.

Pennsylvania requires physicians to report to the state instances of 73 specific diseases, most of which are infectious diseases. However, the list also includes cancer, which may have origins not only from chemicals used to create the fissures that yield natural gas, but also in the blow-back of elements, including arsenic, present within the fissures. Thus, physicians are faced by conflicting legal and professional considerations.

“The confidentiality agreements are worrisome,” says Peter Scheer, a journalist/lawyer who is executive director of the First Amendment Coalition. Physicians who sign the non-disclosure agreements and then disclose the possible risks to protect the community can be sued for breech of contract, and the companies can seek both injunctions and damages, says Scheer.

In pre-trial discovery motions, a company might be required to reveal to the court what it claims are trade secrets and proprietary information, with the court determining if the chemical and gas combinations really are trade secrets or not. The court could also rule that the contract is unenforceable because it is contrary to public policy, which places the health of the public over the rights of an individual company to protect its trade secrets, says Scheer. However, the legal and financial resources of the natural gas corporations are far greater than those of individuals, and they can stall and outspend most legal challenges.

Although Pennsylvania is determined to protect the natural gas industry, not everyone in the industry agrees with the need for secrecy.  Dave McCurdy, president of the American Gas Association, says he supports disclosing the contents included in fracturing fluids. In an opinion column published in the Denver Post, McCurdy further argued, “We need to do more as an industry to engage in a transparent and fact-based public dialogue on shale gas development.”

The Natural Gas committee of the U.S. Department of Energy agrees. “Our most important recommendations were for more transparency and dissemination of information about shale gas operations, including full disclosure of chemicals and additives that are being used,” said Dr. Mark Zoback, professor of geophysics at Stanford University and a Board member.

Both McCurdy’s statement and the Department of Energy’s strong recommendation about full disclosure were known to the Pennsylvania General Assembly when it created the law that restricted health care professionals from disseminating certain information that could help reduce significant health and environmental problems from fracking operations.

[Part 2 looks at the health issues and research studies. Part 3 looks at the truth behind why Pennsylvania has given advantages to the natural gas industry. Assisting on this series, in addition to those quoted within the articles, were Rosemary R. Brasch, Eileen Fay, Dr. Bernard Goldstein, and Dr. Wendy Lynne Lee. Walter Brasch’s current book is Before the First Snow, a critically-acclaimed novel that looks at what happens when government and energy companies form a symbiotic relationship, using ‘cheaper, cleaner’ fuel and the lure of jobs in a depressed economy but at the expense of significant health and environmental impact. The book is available at amazon.com and through the publisher’s website, http://www.greeleyandstone.com]