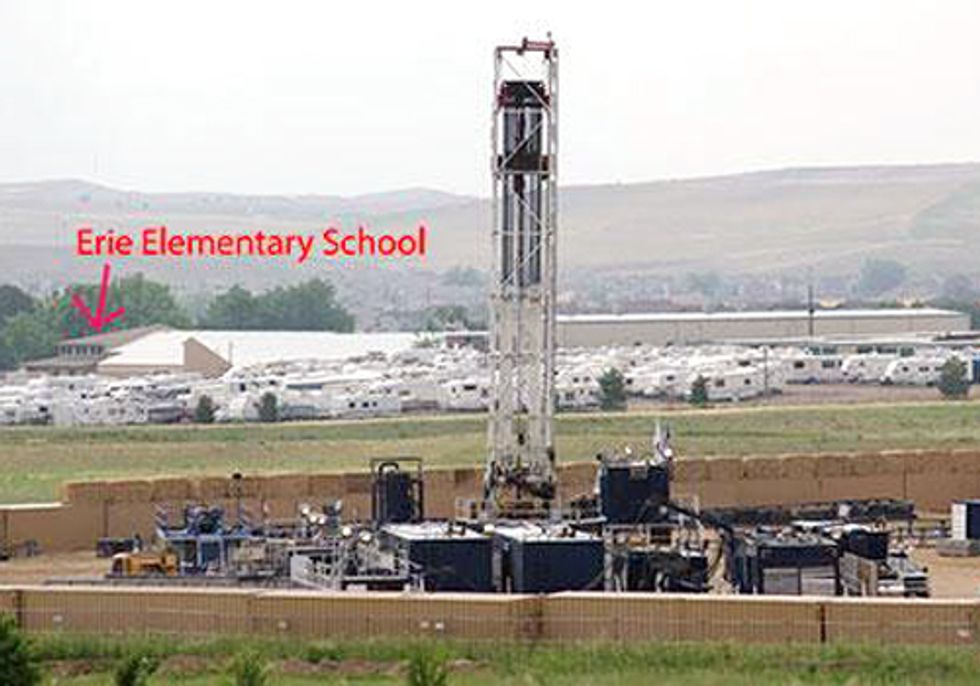 In Pennsylvania—a state that sits in the heart of the Marcellus Shale basin—the concept of "frackademia" and "frackademics" has taken on an entirely new meaning.

On Sept. 27, the PA House of Representatives—in a 136-62 vote—passed a bill that allows fracking to take place on the campuses of public universities. Its Senate copycat version passed in June in a 46-3 vote and Republican Gov. Tom Corbett signed it into law as Act 147 on Oct. 8.

The bill is colloquially referred to as the Indigenous Mineral Resources Development Act. It was sponsored by Republican Sen. Don White, one of the state's top recipients of oil and gas industry funding between 2000-April 2012, pulling in $94,150 during that time frame, according to a recent report published by Common Cause PA and Conservation Voters of Pennsylvania. Corbett has taken more than $1.8 million from the oil and gas industry since his time serving as the state's Attorney General in 2004.

The Corbett Administration has made higher education budget cuts totaling more than $460 million in the past two consecutive PA state budgets. The oil and gas industry has offered fracking as a new fundraising stream at universities starved for cash and looking to fill that massive cash void, as explained by The Philadelphia Inquirer:

Half of the fees and royalties generated by leases of State System of Higher Education lands would be retained by the university where the resources are located. Thirty-five percent would be allocated to other state universities. The remaining 15 percent would be used for tuition assistance at all 14 schools.

Some professors aren't exactly thrilled with this notion.

"I've become extremely concerned, disturbed, and disgusted by the environmental consequences of fracking," a professor at Lock Haven University told Mother Jones in a recent article. "They've had explosions, tens of thousands of gallons of chemicals spilled. And we're going to put this on campus?"

A couple of colleges in West Virginia have leased their land to fracking companies, and Ohio has a similar law to Pennsylvania's. The University of Texas also makes money from natural gas well pads on its land, and even installed one 400 feet away from a daycare center at its Arlington campus.

Yet even these details are merely the tip of the iceberg, as fracking has occured close to K-12 schoolyards for years, with accompanying devastating health consequences.

From Campuses to Schoolyards in TX, NY and CO

As with fracking directly on campus, the gas industry knows no geographical bounds when deciding to extract shale gas close to K-12 schools. Three states serve as case studies.

Perhaps the most tragic state of affairs can be found in Le Roy, New York, a city with roughly 7,600 citizens, at Le Roy Middle School and High School. CNN reported on Le Roy in Feb. 2012:

There are six natural gas wells on school grounds...Two of these wells spilled liquid onto the ground killing trees and vegetation right in the area of the wellheads...It's where every day, students play, do sports, practice their sports, right there on school grounds...This is definitely of concern to experts and parents I've been talking to.

By March of that year, there were 18 documented cases of Tourette Syndrome, the plot serving as the centerpiece for a cover story in an issue of The New York Times Magazine.

Susan Dominus of The Times wrote:

"Teachers shut their classroom doors when they heard a din of outbursts, one cry triggering another, sending the increasingly familiar sounds ricocheting through the halls. Within a few months, as the camera crews continued to descend, the community barely seemed to recognize itself."

Erin Brockovich, the attorney and movie namesake famous for winning a class action lawsuit against Pacific Gas and Electric for over $300 million in the 1990's for contaminating groundwater with hexavalent chromium - a known carcinogen according to the Centers for Disease Control - has decided to take up this case, as well. "We don't have all the answers, but we are suspicious," she told USA Today. "The community asked us to help and this is what we do."

In Feb. 2011, the gas industry made an offer to put several wells a few blocks away from a school located in the Fort Worth Independent School District. The Fort Worth League of Neighborhoods proceeded with a counter-offer of its own, demanding wells stay at least a mile from K-12 schools.

Further, Argyle, TX has approved 36 fracking wells, all of them sitting smack dab in the middle of the tiny city's (population 3,282) elementary school, middle school and high school. Drilling rigs sit right across the street from Cotulla High School in Cotulla, TX and three sit behind the Selwyn School in Denton, TX, right next to a playground.

Photo of a fracking operation a few hundred feet from the Erie Elementary School in Colorado. Photo courtesy of Lighthouse Solar with help from Erie Rising.

"This encroachment of residential areas has really woken up a grassroots revolt of regular Coloradans who are standing up and saying don't come in my backyard," Sam Schabacker, mountain west region director for Food and Water Watch told us in an interview back in June. "And that's really what's going on in Erie. This is Exhibit A of how the gas industry has cavelierly expanded into residential areas against the wishes of local governments and regular Coloradans."

Photo of a fracking operation a few hundred feet from the Red Hawk Elementary School in Colorado. Photo courtesy of Lighthouse Solar with help from Erie Rising.

Erie serves as a case study of an epidemic in Colorado. One study conducted by the Western Resources Advocates found almost 200 wells within 2,000 feet of a public school.

By contrast, explained the Advocates, "it is illegal in Colorado to idle a vehicle for more than five minutes within 1,000 feet of a school—but you can drill for oil and gas, spewing potentially toxic chemicals into the air, as long as you aren't closer than 350 feet."

A University of Colorado School of Public Health study published in March demonstrated the grave risks associated with spending most of one's time near fracking operations, as explained by the Advocates:

People living within a half-mile of oil and gas fracking operations were exposed to air pollutants at a level that is five times higher than the federal hazard standard. Researchers found a number of potentially toxic chemicals in the air near the wells, including benzene, ethylbenzene, toluene and xylene. The chemicals could lead to neurological or respiratory effects that include eye irritation, headaches, sore throat and difficulty breathing.

These realities, at least thus far, haven't slowed the industry's gas rush nor have they served as a red flag for the Colorado government enabling these activities.

Fracking proponents continue their reckless and irresponsible push to frack even in the face of an overwhelming body of science showing that fracking poses serious risks to health and the environment and consensus among experts and government agencies that we need more scientific study on fracking. Our water, air and health are priceless.

Given the state of play across the country for the gas industry, it's hard to disagree.