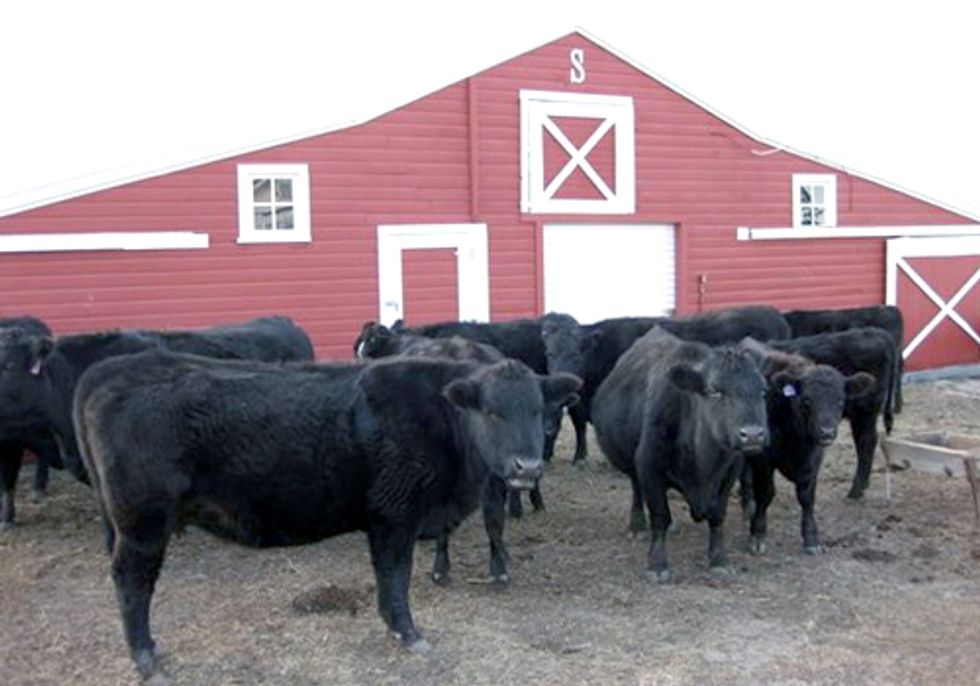 I've blogged before about farmers and ranchers reporting serious illnesses in their livestock that they believe were caused by nearby oil and gas operations. They report that their veterinarians have ruled out all other potential causes. These reports have come from Colorado, New Mexico, Pennsylvania, West Virginia, Arkansas, Louisiana, Texas and North Dakota.

There's a recent article in The Nation about this topic, and it was disturbing enough to warrant another blog post on this topic. The article tells the story of Jacki Schilke, a cattle rancher in the Bakken shale area of North Dakota. There are 32 oil wells within three miles of her ranch.

In the summer of 2010, there was a problem at a nearby oil well. Soon, Schilke observed cattle limping with swollen legs and infections, cows stopped producing milk, animals lost from sixty to eighty pounds in a week and their tails fell off. The Nation website has a photo of one of the cows, which looks very sickly and has lost most of its tail.

By the end of the year, five cows, several cats and two dogs had died. The reporter who wrote the article observed a dozen cats sneezing and coughing, and said she saw "some with their heads tilted at a creepy angle."

At least some animals died of “dust pneumonia” (if you haven't heard of this before, I highly recommend The Dust Bowl on PBS). Air testing on the Schilke ranch found benzene, methane, chloroform, butane, propane, toluene and xylene—toxic substances that can cause serious illnesses, including cancer. Water testing found sulfates, chromium, chloride strontium and selenium. There are an estimated 300 trucks a day on their dirt road, hauling frac-sand, water, potentially toxic waste, fracking chemicals and equipment, and creating enormous amounts of dust.

Jacki and her husband report they are also ill. Jacki tells of the back pain linked to her kidneys, the mornings when she urinates blood, and the lung pain she suffers. Her blood tested positive for acetone and arsenic. She has stopped selling her remaining cattle to her neighbors because, she says, "I won’t sell them because I don’t know if they’re OK."

In addition to the risks to animals that end up in the food chain of many Americans, The Nation article goes on to report about the risks to produce and beverages. Our food and agriculture regulators should be taking these reports very seriously and conducting scientific investigation and taking regulatory action to protect our food chain. And of course victims like the Schilkes should have their health and safety protected. More science is needed, but we have enough information now to know we should be taking precautions and instituting much stronger regulations at the state and federal level to protect clean air, clean water, health and communities from the risks of oil and gas production.