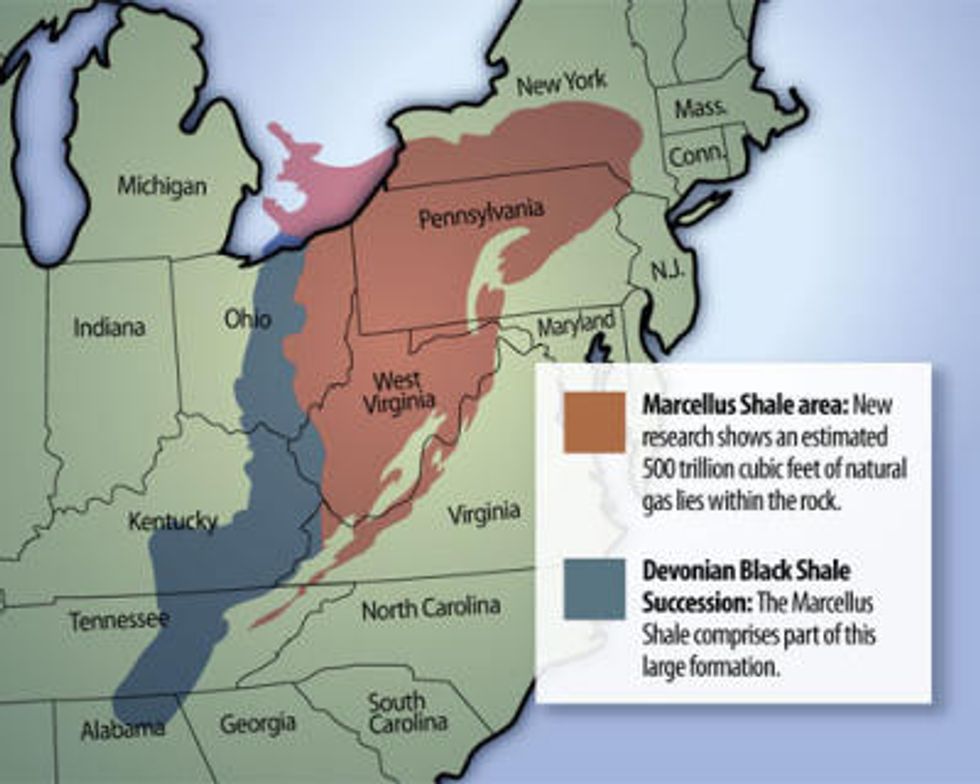 This month, the Pennsylvania Department of Environmental Protection released its bi-annual report on how much natural gas has been produced in the Marcellus Shale, a rock formation which stretches underneath much of Appalachia. Investors were shocked because the production numbers seemed far lower than expected. Watched closely by market and energy analysts, the report sparked a heated debate about the oil and gas industry's excited rhetoric about fracked shale gas as the cure-all to many of America's energy and jobs needs.

But the story quickly got complicated. The report was released despite lacking data from the state’s second largest driller, Chesapeake Energy, and state regulators never flagged the omission. The amount of gas flowing out of Pennsylvania had actually climbed dramatically.

It was a major flaw, and suddenly the searing spotlight of the media honed in on questions about whether regulators were keeping accurate track of how much gas the wells in their state really produce. How could they overlook such a massive error? Can the public be sure that the updated tally gives an accurate picture of how these wells are performing?

If regulators make mistakes in tracking energy production in their state, how reliable is the companion to that report, which tracks the toxic waste produced by these same companies?

Those are all valid questions that need honest answers. But the most important questions raised in the controversy were largely overlooked.

The amount of natural gas produced from all the fracking going on in Pennsylvania matters not just for the state's residents, but also its land-use regulations, waste disposal capacity and water use limits. Unconventional gas production data from the Marcellus Shale matters for the nation as a whole because national energy policy is being crafted based on certain long-term assumptions about shale drilling and the price of natural gas.

The oil and gas industry has propagated a vision that fracking unleashes vast amounts of gas which then flows relatively steadily for decades. But a growing mountain of evidence suggests that nothing could be further from the truth. Shale gas wells dry up, sometimes long before they have produced enough gas to cover the costs of drilling and fracking them.

In the oldest shale formation, Texas’s Barnett shale, many aging wells have had to be re-fracked multiple times to keep them from running dry. Re-fracking costs millions of dollars and requires millions of gallons of water.

A review last year by the New York Times found that less than ten percent of 9,000 Texas shale wells had recouped their estimated production costs within their first seven years.

This is the dirty little secret that the oil and gas industry rarely will acknowledge. Oil and gas companies don't want to discuss it because high volume slickwater horizontal fracking is so new that there is paltry data to show how wells generally perform over the long run (read: twenty to fifty years).

This is why the production data from places like Pennsylvania is so fundamentally important. Not to judge whether more gas is coming out of the Marcellus now—the current drilling boom means that new wells are constantly drilled across the state, adding an enormous burst of gas each time a well is brought online. But because data about individual wells, tracked over time, can show how quickly each well runs low.

The answer to that question is about far more than whether oil and gas companies can make a profit on the gas or whether investors will lose out. It's ultimately a far higher-stakes issue: whether renewables will not only be far cleaner, but also cheaper than shale gas over the long run. Can today’s low natural gas prices last, or are we on the verge of a gas price spike?

If the accuracy of the production data is questionable, then policymakers in Washington, investors on Wall Street and the public at large will have a tough time getting an accurate picture of how these wells perform over the long run.

Relying on industry rhetoric for answers to these questions is perilous. Consider, for example, Chesapeake Energy, the company behind this summer's confusion over production data.

In 2009, Chesapeake was telling investors that its average Marcellus well would produce 4.2 billion cubic feet of gas equivalent (bcfe) of natural gas over its lifetime. By 2010, it had hiked its estimate to 5.2 bcfe per well.

But according to a new U.S. Geological Survey (USGS) report, the industry-wide average for wells drilled in the interior Marcellus region (the best performing area) in 2011 will actually be 1.2 billion cubic feet—roughly one fifth of the amount that Chesapeake has told investors and the public its wells in the region can produce.

Do these federal estimates mean that Chesapeake was lying to investors? No. Every company’s acreage is different—there are sweet spots in the shale, and every driller leases the land it thinks will be most profitable and productive.

Chesapeake also includes natural gas liquids in its estimates (the "e" in bcfe indicates that they're including liquids like propane and ethane along with methane gas), but USGS does not, which could account for a small portion of the difference. And both the company and its federal regulators at USGS are making projections into the future with limited history to guide them—after all, the fracking boom is just over a decade old.

But it does show a wide gulf between the numbers that drillers brag about, and the conclusions reached by independent analysts.

Federal regulators have struggled for some time to get the numbers right when it comes to fracking. When the Energy Information Administration first released estimates for the total amount of gas trapped in the Marcellus, their numbers were stunning. But within less than a year, the agency was forced to drop their projections by roughly 80 percent, as more data showed that early guesses were unreliable.

The new USGS report also shows clearly that individual shale gas wells can be fickle. Some wells are monster wells, able to produce jaw-dropping amounts of gas and making the people who leased their land millionaires overnight. But many other wells in the same region produce very little gas.

For example, the USGS report projects that in the Haynesville shale along the Gulf Coast, the best wells can be expected to produce 20 bcf of gas over their lifetimes. But the worst wells drilled in 2011 can only be expected to generate 0.02 bcf—a thousand-fold difference. The average well in the region will produce 2.6 bcf, the USGS says.

Given that some investment analysts expected far more, and some investors have calculated that Haynesville wells need to produce 5.5 bcf to cover the costs of drilling and fracking, this could spell big trouble for drillers—and potentially a big price spike for consumers.

Companies' hyping of shale gas production and profitability has already had consequences. In the past year or so many of the biggest companies have had to drastically writedown their reserves, partly because the cost of extracting the gas is higher than the price drillers can sell it for. Even though it promised investors untold riches from these shale plays, Chesapeake Energy has gone on a selling spree to try to deal with staggering debt.

All this deeply undercuts the industry's rhetoric and the refrain that will most assuredly get mobilized once again during the upcoming presidential debates about there being a 100-year supply of gas (this myth is unpacked and debunked here).

So, what does any of this have to do with the flap between Pennsylvania and Chesapeake Energy about the well performance data?

It goes to show, yet again, that the uncertainty surrounding our current shale gas bet is as broad and deep as the shale itself.

In Pennsylvania, these problems are especially pronounced. Unlike other energy producing states, Pennsylvania does not have a severance tax on the gas produced in the state, meaning it has less incentive to accurately tally the history of each well. It is also unique in that it only reports its data every six months—all other states release figures monthly.

This all makes it especially difficult for independent analysts who might not have access to the statistics used by the USGS to make their own predictions, to see whether the industry’s claims can be corroborated—or not.