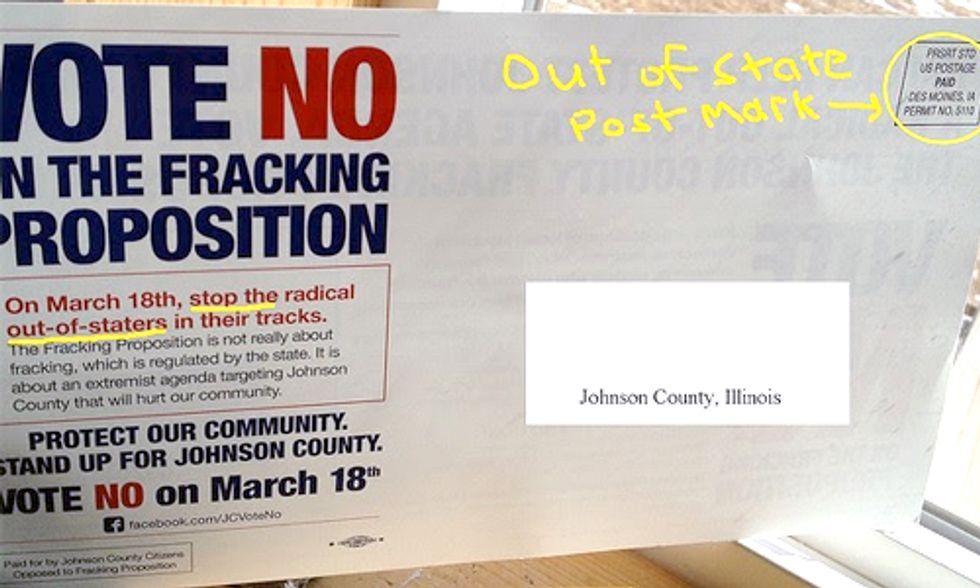 Johnson County, IL has oil and gas interests panicked about a local effort to stop fracking. They're spending tens of thousands of dollars in the rural county to defeat a referendum that opposes fracking and defends local rights.

"Shall the people's right to local self-government be asserted by Johnson County to ban corporate fracking as a violation of their rights to health, safety, and a clean environment?"

The industry and their cronies recently realized that voters are siding with local control instead of handing their future over to Kansas-based frackers Woolsey Energy. A front group for the oil industry started professional mailings and robo-calls possibly funded by the Illinois Petroleum Council which complain about "out-of-state" interests. Additionally, the Illinois Chamber of Commerce spent $23,500 to promote fracking. That's a huge cash dump in a county where less than 3,000 people cast ballots in the last primary election.

Here's a tip for the fracking forces: when you're doing a mailing that gripes about out-of state-agitators, mail it from in-state. They should fire the consultant who had the bright idea of mailing it from Iowa.

The irony would be funny if the fracking industry weren't pushing a community-killing agenda. It's locals (not Kansas-based Woolsey Energy) who will have to suffer the consequences of fracking. Woolsey's mansion won't suffer when Johnson county property values fall. Woolsey will be counting his profits when local residents are dealing with poisoned water. His workers will be on their way to another state when Johnson county is left picking up the pieces after their roads, community infrastructure and environment are wrecked.

The oil industry's inflammatory attacks are dividing the community. Since their campaign began, a local newspaper publisher now refuses to run ads or letters to the editor that oppose fracking. Pro-fracking politicians threaten that the county will be sued if the referendum passes. Locals who had permission to sit at an informational table at a local business for weeks suddenly had the police called to eject them without warning or provocation.

Johnson county resident Tony Gerard recorded a video to break through the newspaper blackout and defend locals who have been organizing to defend their property rights and community.

The oil industry is trying to buy democracy in Johnson county. Residents have the chance in Tuesday's election to decide they want control over their own future without more division and destruction by outside oil interests.