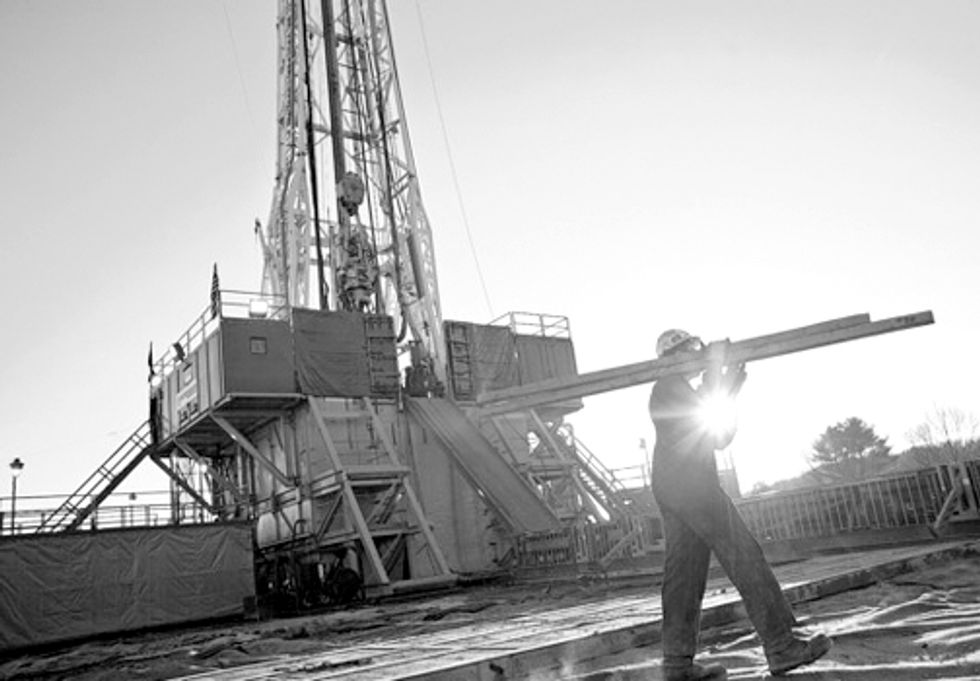 As a whole, Americans have an unfortunate tendency to distrust scientists. The number of those who distrust science and scientists is skewed heavily by ideology, with self-identified “conservatives” overwhelmingly saying that they don’t trust science. DeSmogBlog’s own Chris Mooney has spent an enormous amount of time and energy devoted to finding out why science has become so controversial, and has compiled a great new book explaining why certain sectors of the U.S. population are more prone to denying many scientific findings.

And while most of the distrust that Americans have for scientists and science in general is completely without warrant, there are times when it is reasonable and often necessary to question the findings of scientists. Especially when the money trail funding certain science leads us right back to the oil and gas industry.

Five years ago, the ExxonMobil-funded American Enterprise Institute began offering large cash incentives to scientists willing to put their conscience aside to undermine studies that were coming out regarding climate change. The dirty energy industry knew that these studies would put their well-being at risk because they were responsible for so much of the global warming emissions, so they had to open their wallets to scientists who were more concerned with their finances than the well being of the planet.

A similar scenario played out in the months following BP’s Gulf of Mexico oil disaster. BP arranged meetings with scientists and academics all along the Gulf Coast, offering them $250 an hour to report on the oil spill, as long as the reports weren’t negative. This also would have allowed the oil giant an advantage in future litigation, by creating a conflict of interest for scientists that might otherwise testify against the company.

And then we have the media’s role in all of this, with 'experts for hire' like Pat Michaels allowed to pollute the public conversation with disinformation.

For years, Michaels has taken to the pages of “reputable” papers like Forbes and The Wall Street Journal in an attempt to paint climate change as fraudulent and uncertain, without the public realizing that his primary source of funding was the dirty energy industry and their front groups. One of his most recent crusades has been to convince the American public that fracking is perfectly safe, and we should all be singing the industry’s praises for providing us with cheap natural gas.

But Michaels isn’t the only one trying to convince us that fracking is safe and harmless—The industry itself has decided to jump on the science-buying bandwagon. NewsInferno has the story, based on an initial report by WIRED.com:

As the debate continues and local municipalities look to block fracking expansion in many areas, the energy industries have constantly countered, either mounting their own legal battles or now through influencing researchers to produce studies focusing on fracking’s benefits and safety.

WIRED reports that last week, the provost at University of Texas said it would have to “re-examine” a recent university report from one of its professors that declared fracking was safe on groundwater supplies when it was revealed that professor had taken hundreds of thousands of dollars from a single gas developer in the state.

Nationwide, Americans are being influenced by seemingly unbiased research but not being told who is influencing the authors of these studies. Case in point, the U.S. Chamber of Commerce also recently published a report, according to WIRED, entitled “Shale Works for US” that was directed at Ohioans caught in the crosshairs of the fracking safety debate.

One of the authors of the study, Robert Chase, has been identified as one person who’s been greatly influenced by the energy industries and was even employed as a consultant for companies like Halliburton and Cabot, leaders in the fracking industry. His influence was likely part of a Penn State University study that also found fracking to be safe and ultimately led state lawmakers there to allow some of the most unchecked fracking drilling in the U.S.

Just as the Exxon story made international headlines, so too should this story. Credible, honest studies have already been made public that show that there is nothing safe about the process of unconventional gas development. DeSmogBlog’s Fracking The Future report is a great source of information on the dangers that fracking and other risky industry practices pose to the health of human beings as well as the environment.

But this is hardly the first time that the industry has been on the wrong side of science. In May of this year, I reported on how the fracking industry was trying to keep doctors in the dark about the chemicals being injected into the ground, and also attempting to get gag orders on doctors to prevent them from speaking with patients and the public about drilling-related illnesses.

The only thing currently holding back a wave of new fracking wells in America is public opinion and opposition from elected officials. But even with those hurdles in place, the industry continues to operate with almost no oversight, and drilling activities are still expanding. If scientists are willing to tell the American public and our elected leaders that fracking is safe, that could easily be enough to expand this dirty practice to areas that, at least for now, have been off limits to the industry.