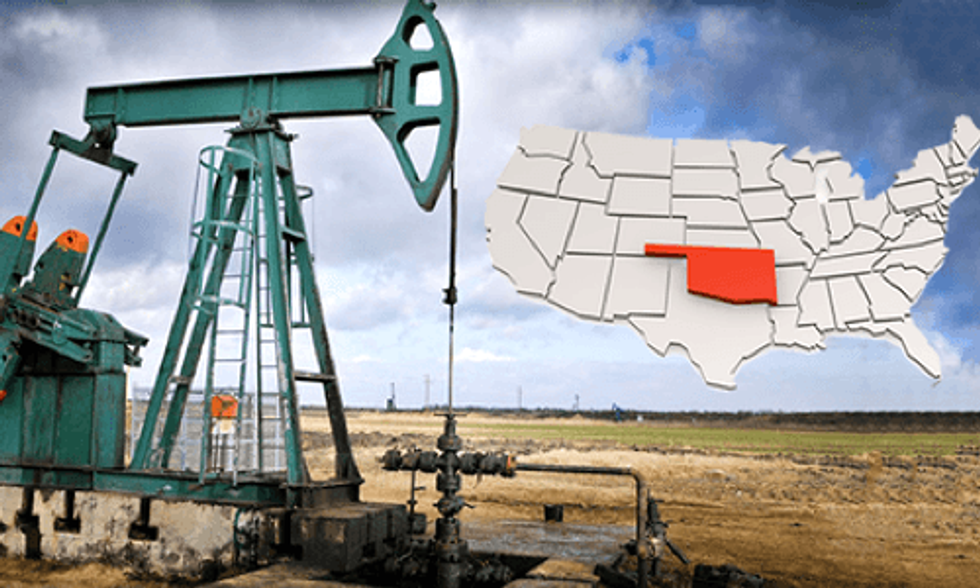 Earthquakes continue to rattle the frack-happy state of Oklahoma. The Sooner State has jumped from two earthquakes a year to roughly two a day, with scientists once again pinning the recent uptick on fracking.

Scientists have identified that the injection of wastewater byproducts into deep underground disposal wells from fracking operations are very likely triggering the major increase of seismic activity in the central U.S. state.

Oklahoma, which is not near any major fault lines, has felt 585 earthquakes that were a 3.0-magnitude or greater in 2014—three times the 180 quakes felt by California last year, the AFP reported. Last month alone, Oklahoma experienced more than 600 quakes that could shake homes and cars, with the town of Crescent hit hardest with a 4.5 whammy, the AFP said.

"It's completely unprecedented," George Choy, a seismologist at the U.S. Geological Survey (USGS), told AFP about the spate of recent tremors.

"What's at risk is that when you put water into the ground, it's never going to come back out. You're putting it in places it has never been before," Choy told AFP.

Oklahoma has about 4,500 disposal wells. Last week, the state's public utilities commission shut two wells and slowed the disposal volume of three more, a local news station reported, after a series of earthquakes, including a 4.1, hit the city of Cushing, which holds one of the largest crude oil storage facilities in the world.

The energy industry is, in a word, everything for Oklahoma. The state is one of the top natural gas-producing states in the nation. One-quarter of all jobs are either directly or indirectly tied to the energy industry.

The scientific evidence, however, continues to mount against the oil and gas sector. Oklahoma has seen a 50 percent increase of quakes the last two years, according to the USGS.

"We are the only state where once this problem came up, we just kept going [with fracking]," Johnson Bridgwater, the executive director of the Oklahoma chapter of the Sierra Club, told the AFP. "We want public safety to come first, rather than treating this state as a giant lab."

Even pro-business state Gov. Mary Fallin changed her tune about the link between fracking and earthquakes for the first time at the state Capitol last month.

"I think we all know now that there is a direct correlation between the increase of earthquakes that we've seen in Oklahoma [and] disposal wells," Fallin said.