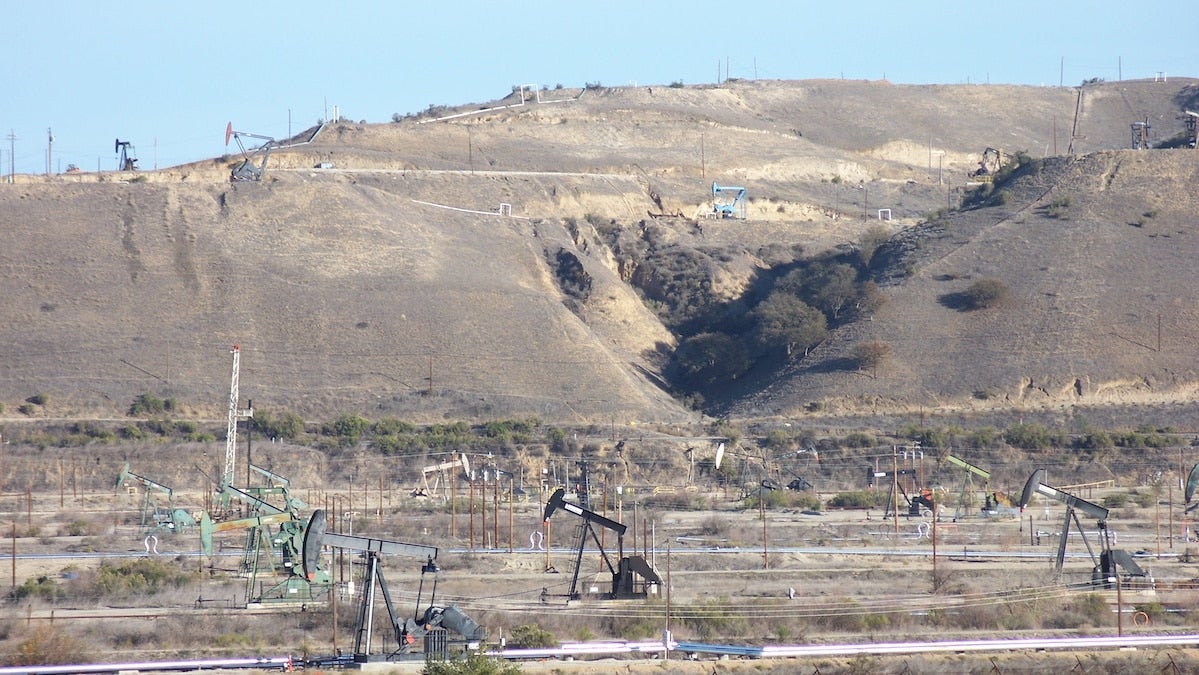 Activity in the San Ardo oil field near Salinas, California, has been linked to earthquakes. Eugene Zelenko / Wikimedia / CC BY 4.0

The way companies drill for oil and gas and dispose of wastewater can trigger earthquakes, at times in unexpected places.

In West Texas, earthquake rates are now 30 times higher than they were in 2013. Studies have also linked earthquakes to oil field operations in Oklahoma, Kansas, Colorado and Ohio.

California was thought to be an exception, a place where oil field operations and tectonic faults apparently coexisted without much problem. Now, new research shows that the state’s natural earthquake activity may be hiding industry-induced quakes.

As a seismologist, I have been investigating induced earthquakes in the U.S., Europe and Australia. Our latest study, released on Nov. 10, shows how California oil field operations are putting stress on tectonic faults in an area just a few miles from the San Andreas Fault.

Industry-induced earthquakes have been an increasing concern in the central and eastern United States for more than a decade.

Most of these earthquakes are too small to be felt, but not all of them. In 2016, a magnitude 5.8 earthquake damaged buildings in Pawnee, Oklahoma, and led state and federal regulators to shut down 32 wastewater disposal wells near a newly discovered fault. Large earthquakes are rare far from tectonic plate boundaries, and Oklahoma experiencing three magnitude 5 or greater earthquakes in one year, as happened in 2016, was unheard of.

Oklahoma’s earthquake frequency fell with lower oil prices and regulators’ decision to require companies to decrease their well injection volume, but there are still more earthquakes there today than in 2010.

A familiar pattern has been emerging in West Texas in the past few years: Drastically increasing earthquake rates well beyond the natural rate. A magnitude 5 earthquake shook West Texas in March.

At the root of the induced earthquake problem are two different types of fluid injection operations: hydraulic fracturing and wastewater disposal. 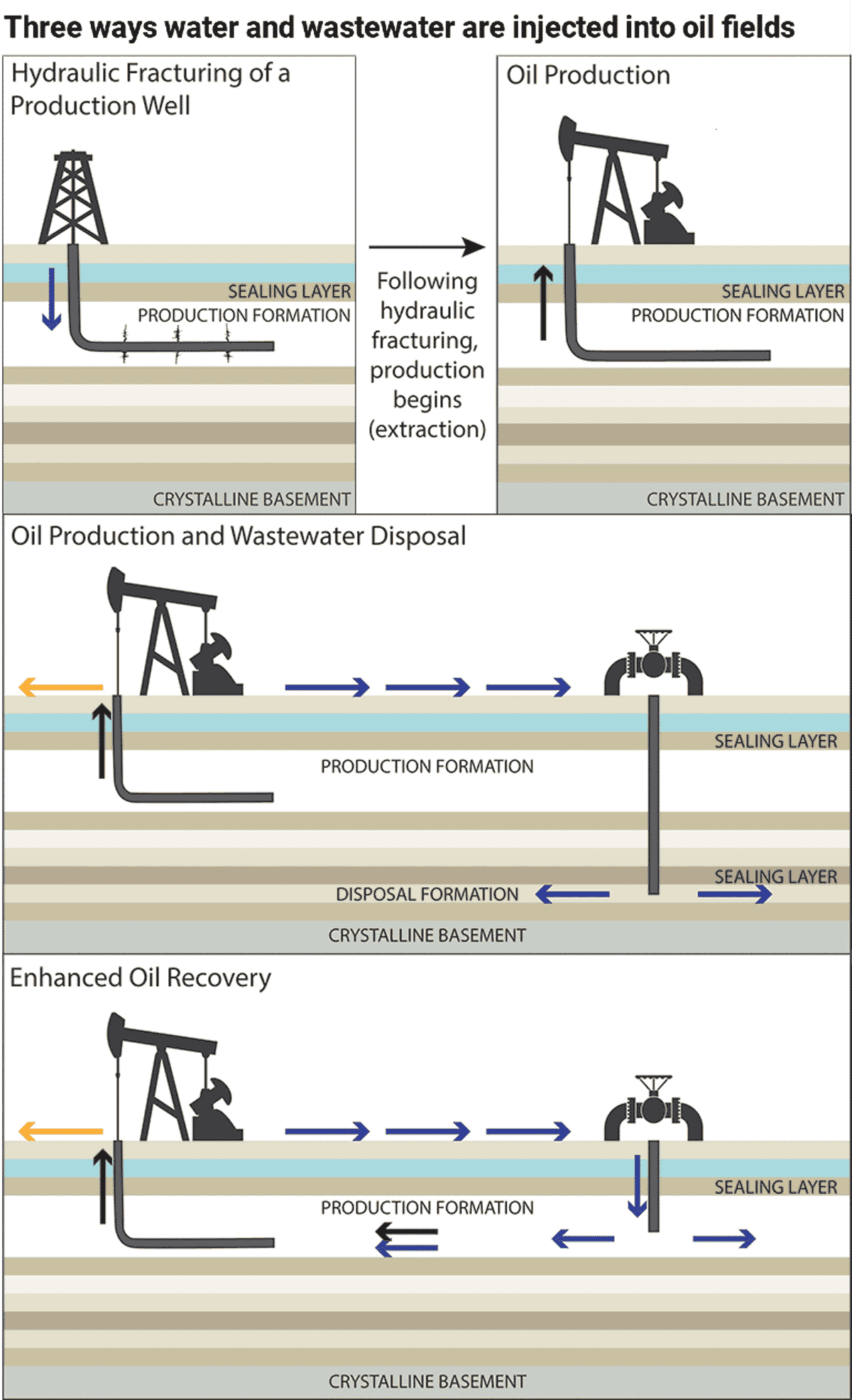 Tectonic faults underneath geothermal and oil reservoirs are often precariously balanced. Even a small perturbation to the natural tectonic system – due to deep fluid injection, for example – can cause faults to slip and trigger earthquakes. The consequences of fluid injections are easily seen in Oklahoma and Texas. But what are the implications for other places, such as California, where earthquake-prone faults and oil fields are located in close proximity?

The state has a large number of oil fields, earthquakes and many instruments that detect even tiny events, and it was thought to be largely free of unnatural earthquakes.

My colleague Manoo Shirzaei from Virginia Tech and I wondered if induced earthquakes could be masked by nearby natural earthquakes and were thus missed in previous studies. We conducted a detailed seismologic study of the Salinas basin in central California. The study area stands out because of its proximity to the San Andreas Fault and because waste fluids are injected at high rates close to seismically active faults. 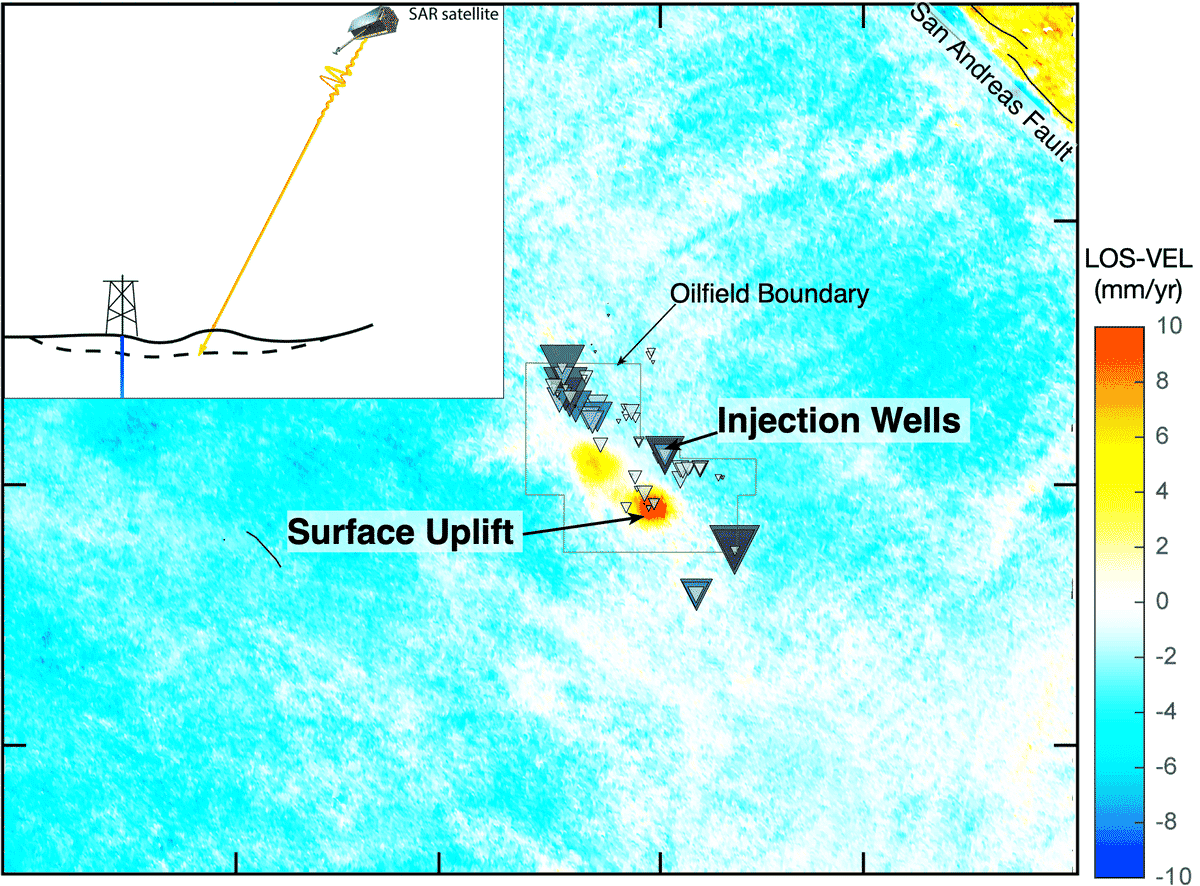 Satellite data shows the ground rising as much as 1.5 centimeters per year in parts of the San Ardo oil field. The line-of-sight velocity (LOS-VEL), as viewed from the satellite, shows how rapidly the ground surface is rising. Thomas Goebel / University of Memphis

Using satellite radar images from 2016 to 2020, Shirzaei made a surprising observation: Some regions in the Salinas basin were lifting at about 1.5 centimeters per year, a little over half an inch. This uplift was a first indication that fluid pressures are out of balance in parts of the San Ardo oil field. Increasing fluid pressures in the rock pores stretch the surrounding rock matrix like a sponge that is pumped full of water. The resulting reservoir expansion elevates the forces that act on the surrounding tectonic faults.

Next, we examined the seismic data and found that fluid injection and earthquakes were highly correlated over more than 40 years. Surprisingly, this extended out 15 miles from the oil field. Such distances are similar to the large spatial footprint of injection wells in Oklahoma. We analyzed the spatial pattern of 1,735 seismic events within the study area and found clustering of events close to injection wells. 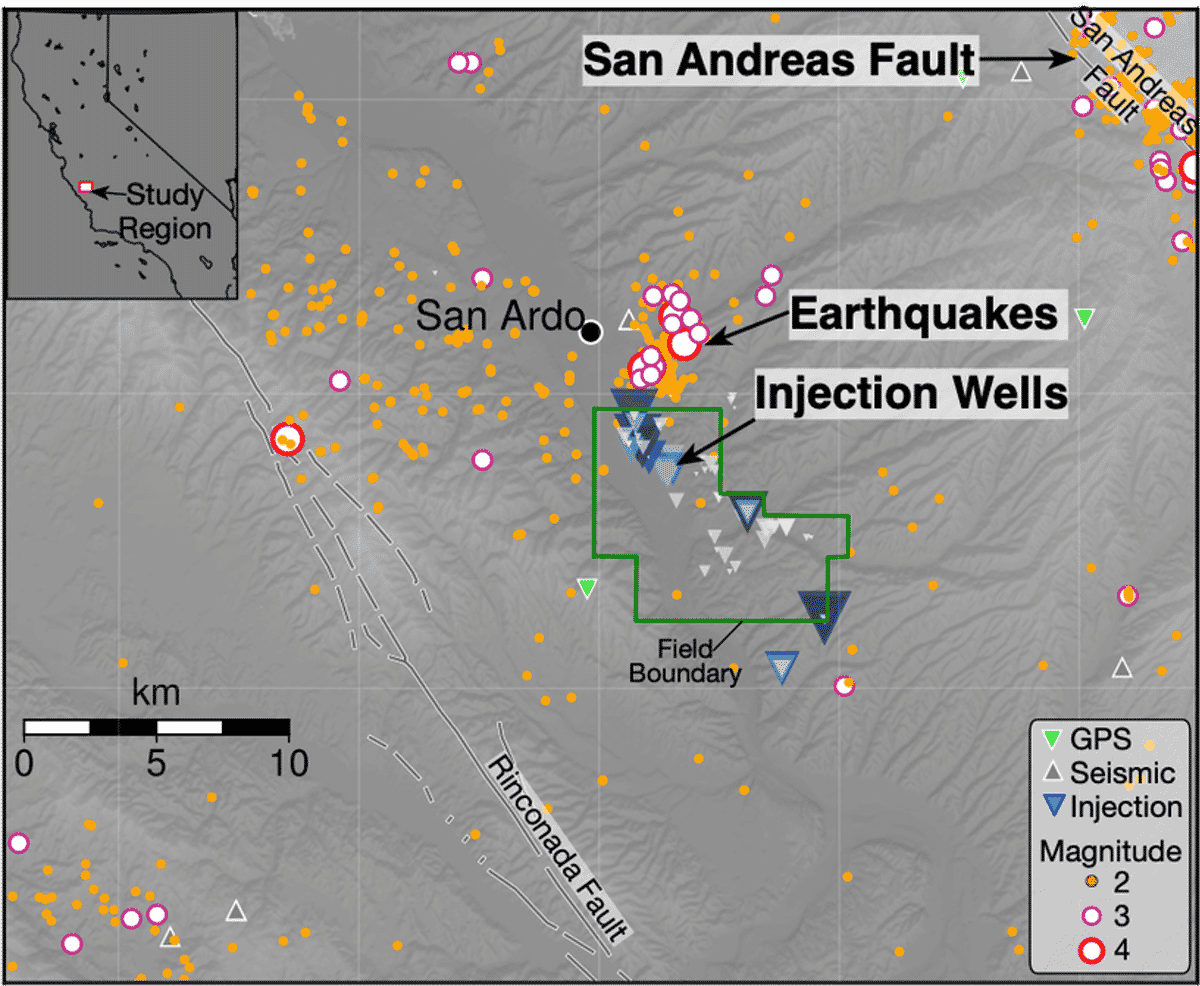 The stresses from injecting water can trigger earthquakes several miles from the well itself. The blue triangles scale with each well’s injection rate. Thomas Goebel/University of Memphis / CC BY-ND

Other areas in California may have a similar history, and more detailed studies are needed to differentiate natural from induced events there.

How to Lower the Earthquake Risk

Most wastewater disposal and hydraulic fracturing wells do not lead to earthquakes that can be felt, but the wells that cause problems have three things in common:

Although the first issue may be difficult to resolve because reducing the volume of waste fluids would require reducing the amount of oil produced, the locations of injection wells can be planned more carefully. The seismic safety of oil and gas operations may be increased by selecting geologic formations that are disconnected from deep faults.

Thomas H. Goebel is an assistant professor of seismology at the Center for Earthquake Research and Information, University of Memphis.
Disclosure: Thomas H. Goebel receives funding from the U.S. Department of Energy