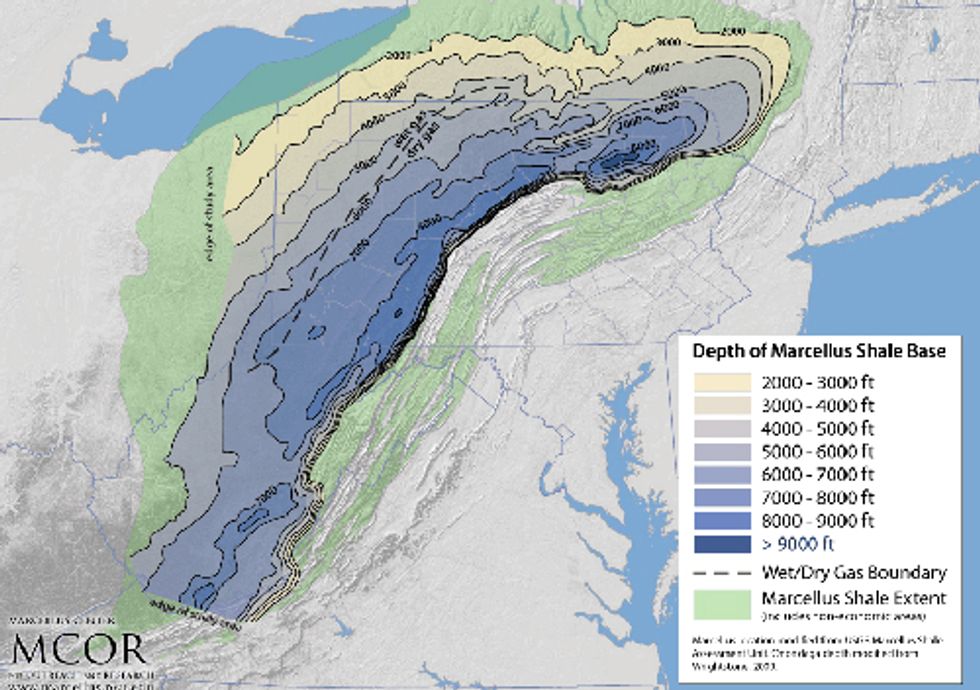 Marcellus Shale gas wells in Pennsylvania generated about $3.5 billion in gross revenues for drillers in 2011, along with about $1.2 billion in West Virginia, according to an analysis by The Associated Press. However, wholesale price for natural gas has dipped below $2 per MCF over the last year.

This year less drilling and less revenue may result. The developing strategy is to drill for “wet gas” then separate out the valuable ethane, propane and other hydrocarbon by-products. In 2011 the Marcellus formation produced just over 1 trillion cubic feet of gas in Pennsylvania, and about 350 billion cubic feet in West Virginia. Ohio has almost no Marcellus production, but activities to drill into the Utica formation are underway.

Move to wet gas paying off for drillers

As reported by the Wheeling Intelligencer, natural gas drillers are earning substantially more revenue—up to three times more—for every “wet gas” well they complete compared to every dry well, according to Chesapeake Energy. Company information shows that for a typical dry gas well, the company makes an average of $13,000 in revenue per day.

However, for a “wet gas” well, the daily revenue more than doubles to $27,800 per day. Then, for a “wetter” gas well, such as those found in Marshall County, WV, they earns an average of $38,800 in revenue every day of production. Chesapeake spokeswoman Stacey Brodak said these amounts are for gas streams that keep the ethane with the methane, as opposed to separating and sending the ethane to cracker facility for even higher profits.

The process of keeping the ethane in the gas stream is known as “ethane rejection.” “Ethane rejection may occur when there is not sufficient market demand for purity ethane. Consequently, the ethane is left in the gas stream until increased demand is realized,” Brodak said. Along with the increased focus on natural gas liquids from wet gas, Chesapeake and its partners plan to open a $900 million natural gas processing complex with facilities in Harrison and Columbiana counties by the middle of next year. Chesapeake will partner with M3 Midstream and EV Energy Partners to build natural gas gathering and compression facilities that Chesapeake will operate. M3 will also operate some processing, natural gas liquids fractionation, loading and terminal facilities.

The processing facility to be located in Columbiana County will have an initial capacity of 600 million cubic feet per day. Natural gas liquids will be delivered to a central hub complex in Harrison County that will feature an initial storage capacity of 870,000 barrels. The Harrison County facility will also have fractionation capacity of 90,000 barrels per day, as well as a substantial rail-loading facility, according to Chesapeake. MarkWest Energy is building a $500 million natural gas processing complex for Harrison and Monroe counties, as well.

The map shown above is from the Penn State Marcellus Center for Outreach and Research (MCOR), where other information and other maps of interest can be found.