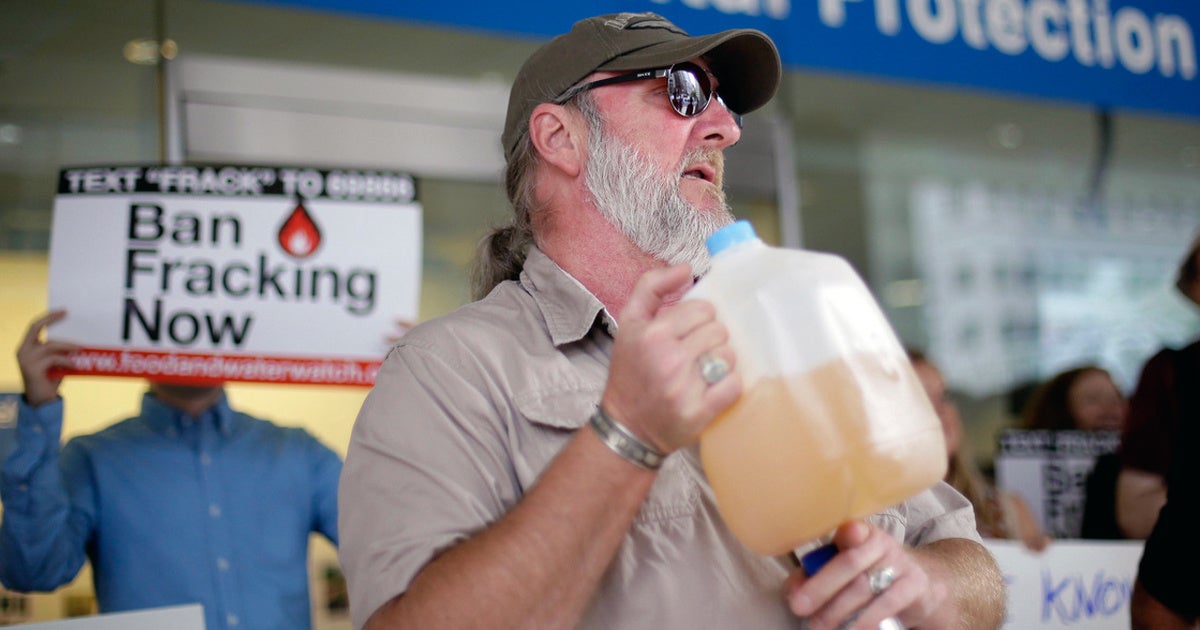 Ray Kemble of Dimock, Pa., displays a jug of what he identifies as his contaminated well water. (AP/Matt Rourke)

Ever since the dangerous consequences of natural gas extraction via hydraulic fracturing—popularly known as “fracking“—entered the national consciousness, the small town of Dimock, Pennsylvania has arguably been “ground zero” for water contamination caused by the controversial practice.

Now Cabot Oil & Gas, the massive energy company responsible for numerous fracking wells near Dimock, is suing one of the town’s residents for $5 million, claiming that his efforts to “attract media attention” to the pollution of his water well have “harmed” the company. According to the lawsuit, Dimock resident Ray Kemble’s actions breached an earlier 2012 settlement that was part of an ongoing federal class action lawsuit over the town’s water quality. Kemble has stated that Cabot’s fracking turned his groundwater “black, like mud, [with] a strong chemical odor.”

Earlier this year, Kemble filed a follow-up lawsuit against Cabot, which was based on new findings that could help him prove the link between Cabot’s fracking operation and the contamination of his well. Cabot, at the time, argued that the case was built on “inflammatory allegations” intended to “poison the jury pool” and “extort payment” from the company.

Kemble eventually dropped his lawsuit, acting in response to new information that he thought might negatively affect the case. Kemble’s lawyers have declined to comment on the nature of that information. Cabot alleged that this lawsuit was a breach of the 2012 settlement contract Kemble had signed, prompting them to counter-sue Kemble.

Cabot’s decision to sue Ray Kemble may be motivated by more than their distaste for his now-dismissed lawsuit. In context, it appears meant to intimidate and “send a message” to Kemble and any other resident thinking of voicing similar concerns and objections. Days before Cabot’s lawsuit against Kemble was filed, the U.S. Agency for Toxic Substance and Disease Registry (ATSDR) arrived in Dimock to examine the groundwater of several homes close to Cabot fracking wells, including Kemble’s.

Kemble described the state of his groundwater to the Associated Press: “Take a skunk and every household chemical, put it in a blender, puree it for five minutes and take a whiff. It burns the back of your throat, makes you gag, makes you want to puke. It’s all still bad. That’s why they’re back up here.”

The ATSDR told the AP that it is testing Dimock’s water for bacteria, gases and chemicals in order to “determine if there are drinking water quality issues that may continue to pose a health threat.” Their previous study in 2012 found high levels of chemicals such as methane, cadmium, lead and arsenic. They also found that several residences were “at risk of explosion or fire” due to high methane levels. In the past, several drinking water wells in Dimock have exploded due to the high amount of methane now present in the town’s water.

Dimock residents have been expressing concern over the quality of their water for nearly a decade. In 2009, Pennsylvania state officials determined that Cabot Oil & Gas was responsible for the contamination, though the EPA complicated this decision by announcing in 2012 that Dimock’s water was “safe” to drink. The EPA arrived at this conclusion despite the fact that its investigators—along with the ATSDR—had found “significant damage to the water quality” due to the presence of nearby fracking wells.