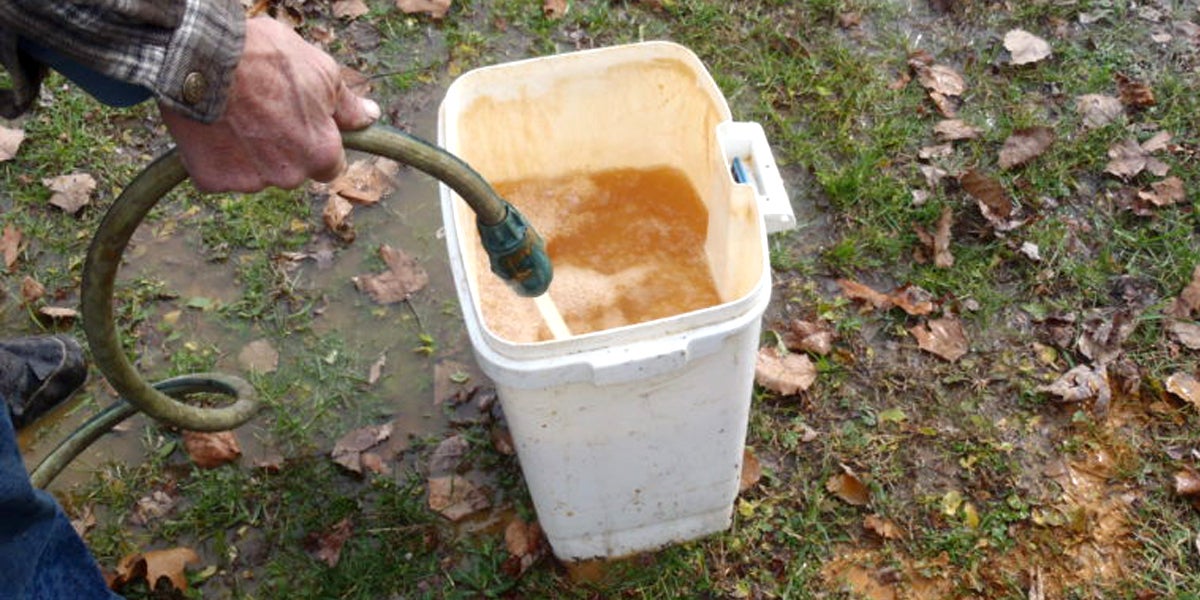 Guess what was found in Pennsylvania’s Department of Environmental Protection’s (DEP) filing cabinets after gas operators drilled 10,027 fracking wells over the last 12 years? Only 9,442 citizen-reported fracking complaints. And 44 percent of those are drinking water-related. Pennsylvania’s DEP finally released the complaints to Public Herald, an investigative journalism nonprofit. There’s much to learn from Pennsylvania’s now-public 9,442 fracking complaints as legislators decide to frack or not to frack in Western Maryland. 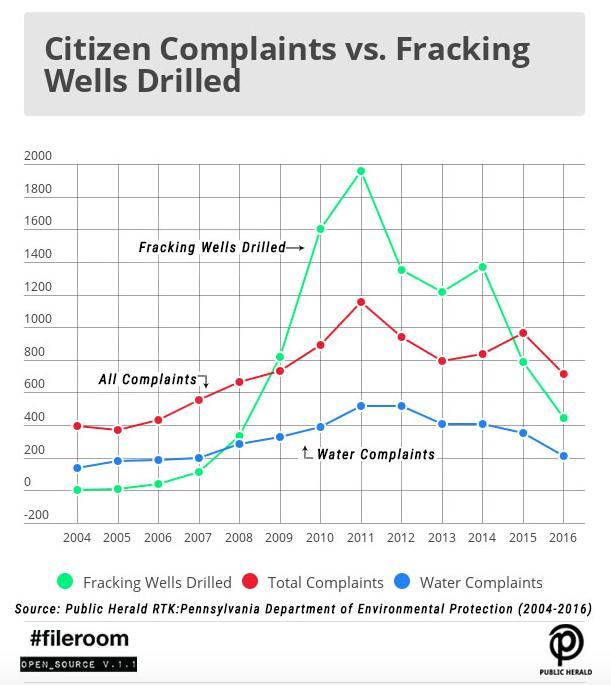 As fracking took off in 2008, so did the number of citizens lodging water, air and land fracking complaints with the DEP.

1. The volume of citizen complaints is alarming, shocking even. For every fracking well drilled, one homeowner, business or gas operator called in an issue.

2. Water well complaints make up 44 percent of DEP complaints. The DEP is the”911 dispatch” center for citizen oil and gas issues. Ninety-six percent of these water complaints were dismissed. The current number of water complaints is higher as the DEP put methane migration and other water issues under different complaint categories; those cases are additional to the 4,108 reported so far.

3. Water contamination is indeed widespread and systemic: Total complaints and water complaints are scattered throughout Pennsylvania’s fracking fields and aren’t concentrated in one area.

A tally of the fracking wells drilled, total and water-related fracking complaints by EPA region in Pennsylvania. Public Herald and DEP

4. Complaint ratios worsen over time: As fracking grew in Pennsylvania, gas operators should have reduced the negative impacts to land, air and water over time. This data suggests that as fracking continues, complaint ratios increase.

Because this citizen-complaint data was never studied year-over-year, the opportunities to develop best practices, share learning, conduct scientific studies and possibly reduce future harm were eliminated. Sadly, Pennsylvania DEP and Gov. Wolf were touting that fracking is safer by reporting lower violations. DEP failed to ever report the real volume of citizen complaints. 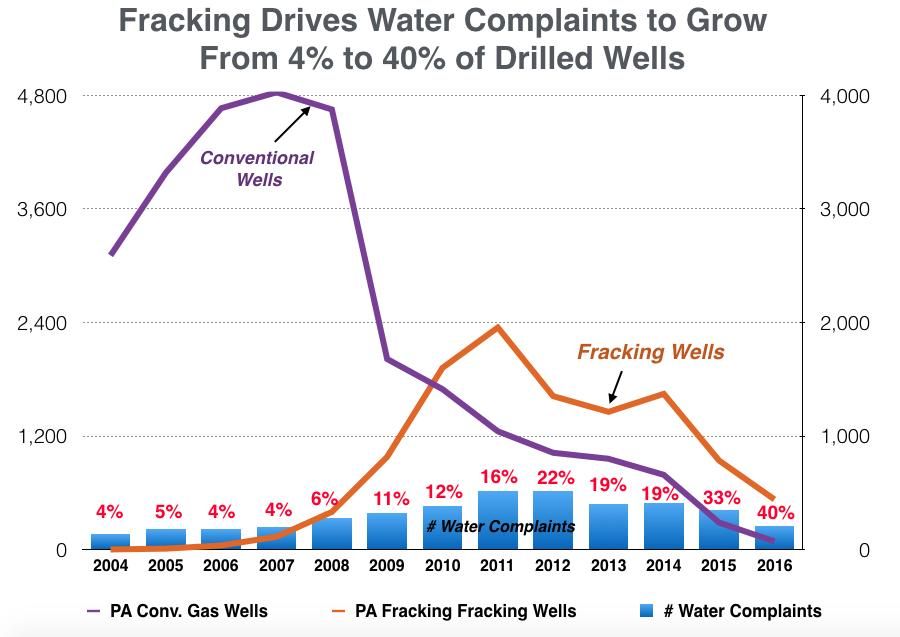 Why Was This Complaint Data Never Made Public?

Did the EPA ever see these 9,442 citizen complaints? Adding to this mess, several thousand complaint records are missing. Over three years, Public Herald scanned 6,981 paper complaints before the DEP emailed the nonprofit 9,442 complaints. What happened to the almost 3,000 complaint records?

This data would have been invaluable to scientist, health professionals, citizens and communities to know, study, plan and adapt. How many people got sick even though authorities knew water wells were getting contaminated? Dr. Stolz explains, “Suppressed information from Pennsylvania regulators makes it very difficult to know the truth about these incidents,” he said.

What Happened to the 3,824 Citizens Who Called In and Their Water Complaint Was Dismissed?

The DEP determined that 96 percent of the fracking water complaints were not caused by nearby gas operations. Were they bogus calls?

“You’re telling me that there are thousands of people in Pennsylvania that want to fool the DEP? I can’t accept that,” said Dr. John F. Stolz to Public Herald. Dr. Stolz is a Professor of Biology at Duquesne University and through his Center for Environmental Research and Education has been providing free water tests for citizens who claim water damage. 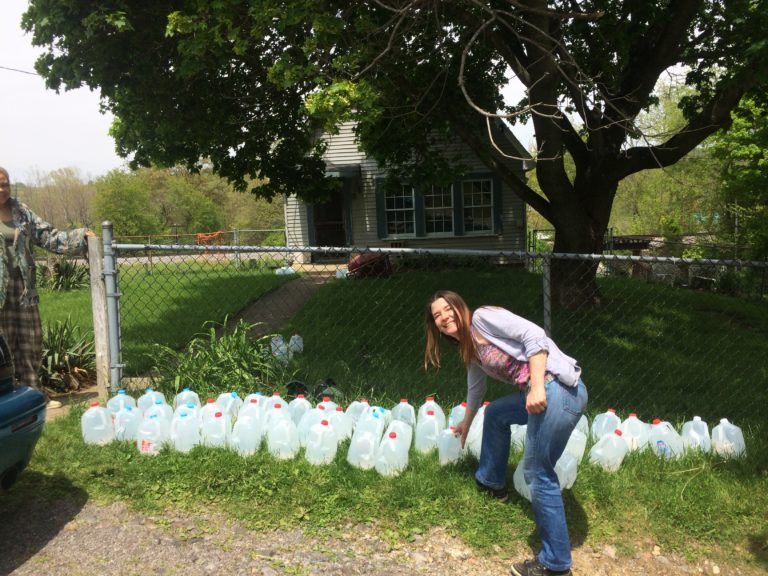 Friends of the Harmed’s Dana Dolney delivers weekly water to a Pennsylvania homeowner whose well was claimed to be ruined by fracking. There’s no financial restitution or government support available for fracking damage. Homeowners either work with the offending gas company, sue or rely on charity.

If there is a minimum level of inherent damage involved with fracking, as the data suggests, what will fracking look like with 20,000 fracking wells in a region? What will happen to Western Maryland’s tourism and rural landscape? 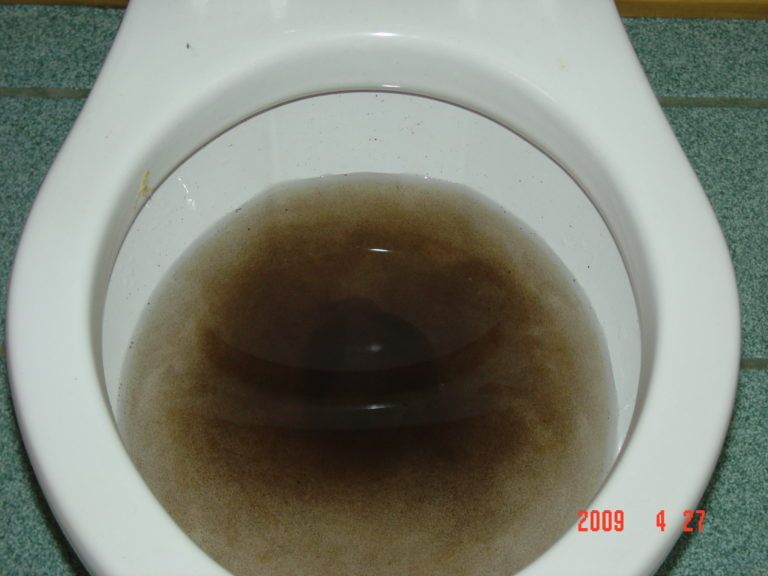 My answer. Actual West Virginia commode after nearby fracking trashed private well water. Plaintiff lost their lawsuit even though plaintiff had a taped phone call confession that frackers had ruined water.

Reposted with permission from our media associate Baltimore Fishbowl.