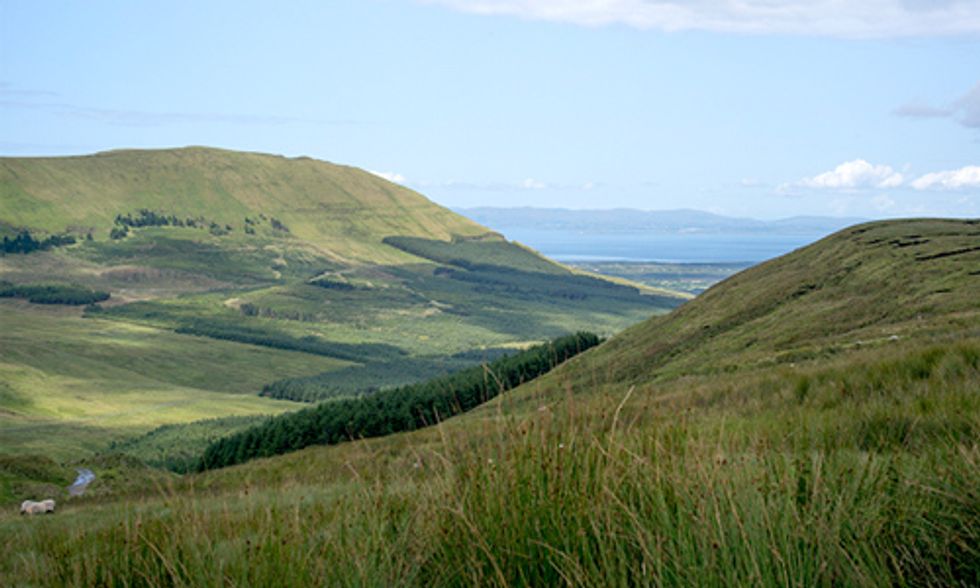 UPDATE, Aug. 15: The Environment Minister Mark Durkan has halted the Australian drilling company Tamboran's test drilling operations in a sparsely populated area of Fermanagh County saying that: "I have concerns that this is an existing quarry where unauthorized extraction has taken place," and, "This is Environmental Impact Assessment development requiring full planning permission and that permitted development rights do not apply."

Knockmore Road was a small potholed country road for as long as anyone can remember, but suddenly it was paved with two layers of tarmac. Heavy trucks are rolling in with police protection. Hydro-fracking for natural gas is coming to Ireland. Opposition is mounting, but many of the protesters are not local. Daniel Graham, a local resident, says that the local people are resigned to the inevitability. He marveled at the number of police at the drill site, and wondered how much of his tax money was going to insulate this private enterprise from public opposition.

This first drill site in Ireland is happening at an abandoned rock quarry that is surrounded by fence topped with razor wire, and thus is not visible from the road. Officials are stressing that this operation is only a test drilling operation to determine the quality and quantity of the shale gas to be had, and that there will be no fracking during this stage.

A double page advertisement in the local paper, The Impartial Reporter, by the drilling company (Tamboran) lists the potential benefits of fracking to Fermanagh County as: decades of gas reserves, security of supply, cheaper energy, investment (though it does not specify where the 6bn pounds would be invested, or to whose benefit), training ("Tamboran could help facilitate job training at local colleges…"), jobs ("We believe there could be hundreds of direct and probably thousands of indirect jobs…"), tax Revenues, (estimated tax revenues of many billion…"), community Funds ("…Tamboran would expect local Fermanagh communities to receive special funding, as well as advantages to local roads, schools, and hospitals").

It also states that "Hydraulic fracturing has been carried out safely in tens of thousands of boreholes, not just in the USA and Canada but also in the North Sea."

Meanwhile opposition is growing, and the police have "a plan in place to deal with unrest."

In another incident, the home of the drill site security provider has been petrol-bombed.

Nowhere in the Impartial Reporter print edition that was given to this writer, nor on the web pages surveyed are there accounts of the negative impacts of hydro-fracking that have been seen in the places in which it has been practiced. This part of Ireland seems to be a country with extensive subsurface water, and one wonders what will be the effect of the subsurface pressurization of the mysterious cocktail of chemicals in this hydrology.

Though it is possibly a realistic approach, the fatalistic Irish acceptance of this technology is a dangerous acquiescence.