Fracking Cases in Pennsylvania Expose the Human Cost of Drilling 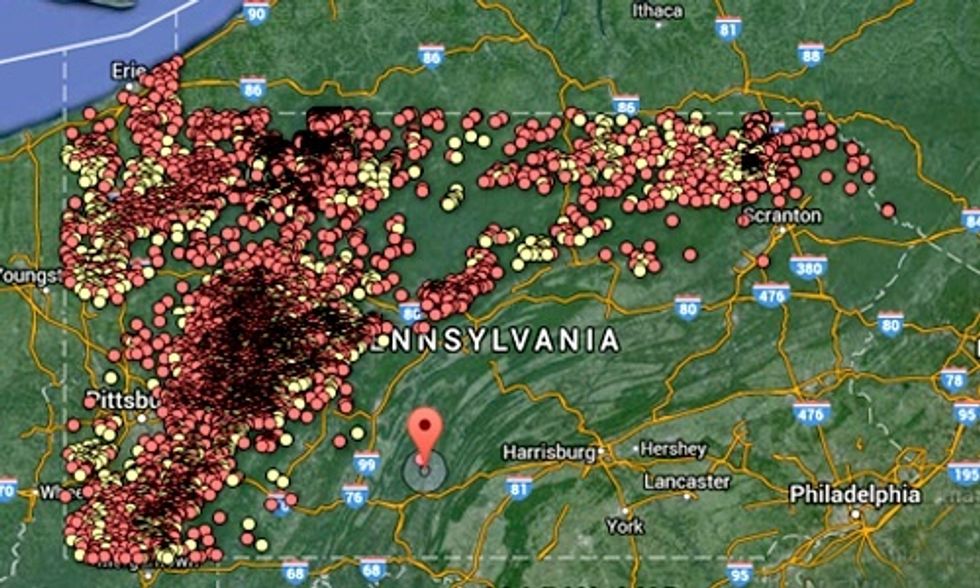 The environmental costs of fracking, from earthquakes to an alarming rise in methane emissions, has been well reported. The human cost of fracking, however, is not heard often enough. In Pennsylvania, two recent cases in Susquehanna County have put the controversial drilling process at the forefront.

As jury selection kicks off in the notorious fracking water contamination case in Dimock against Cabot Oil & Gas Corp, a family of maple syrup farmers in the same northwestern county will potentially lose their trees, and thus their livelihood, to make way for the company's latest fracking pipeline project, the 124-mile Constitution Pipeline.

Residents in the small village reported health problems with their coffee-colored water, such as rashes, nausea, headaches and dizziness.

"We haven't had clean water since he was in kindergarten," Marta-Ely, pointing to her 13-year-old son Jared at a news conference during a break in jury selection, Reuters reported.

The Dimock case dates back to 2009 when 44 plaintiffs brought a lawsuit against the company. In the five years since initiating litigation, the Elys and Huberts are the only plaintiffs remaining on the case as the vast majority have settled with the company.

Dimock, Pennsylvania, aka the ground zero of fracking contamination in the east coast, was the subject of the Oscar-nominated 2010 documentary Gasland that infamously featured the town's flaming faucets due to its alarming concentrations of methane.

Pointing to court documents, Reuters reported that the trial "will bring light to a state law that assumes that a gas driller is responsible for water well contamination within 1,000 feet of a drilling site that develops within six months of drilling."

According to NPR's StateImpact, Cabot has already accumulated more than 130 drilling violations at its Dimock wells, yet insists that methane migration in Dimock's water is naturally occurring. The company is currently banned from drilling in a 9-mile area of Dimock but is trying to lift the ban, StateImpact noted.

"The evidence will show that Cabot met or exceeded the applicable standards of care in the drilling and completion of the ... wells," according to court documents seen by Reuters. "Cabot will present evidence that the plaintiff's water is potable."

During the fracking process, massive quantities of water, sand and toxic chemicals are shot into shale formations to release natural gas.

The White House boasts that the boom in "cheap" natural gas has put the country's dependence on foreign oil at a 40-year low and Marcellus Shale that runs beneath most of Pennsylvania is a "key target" for Big Oil and Gas and accounts for nearly 40 percent of U.S. shale gas production.

Meanwhile, maple syrup farmers in the Susquehanna county will have their maple grove seized due to the construction of the Constitution Pipeline, RT reported.

The Federal Energy Regulatory Commission (FERC) gave notice on Jan. 29 to proceed with tree cutting on the Pennsylvania portion of the pipeline.

RT noted that Cabot Oil is one of the partners of the $875 million pipeline that will take natural gas from Pennsylvania's Marcellus Shale to New York. The other joint parter is the energy company Williams.

The Holleran family, which has been at the center of this fight, has had their property seized via eminent domain, with neither landowner permission nor previous compensation, their Facebook page says.

According to RT, about 200 maple trees will be cut, or 80 percent of the maple trees on the property.

"The last couple of days, and especially this morning have been emotionally crazy. This is a hard time for my family, and it's taking us a bit to work things out," family spokesperson Megan Holleran wrote on Facebook after FERC's decision.

Construction of the pipeline is currently stalled, as environmental groups and state Attorney General Eric Schneiderman have successfully blocked the New York portion of the pipe.

However, as lawyer Mike Ewall of Energy Justice Network said, “Constitution Pipeline Company is threatening this family’s livelihood for a pipeline that may never be built. They still don’t have FERC’s permission to construct, yet they bully and intimidate landowners while offering paltry compensation for taking their land.”

Watch the video below to learn more about the case.