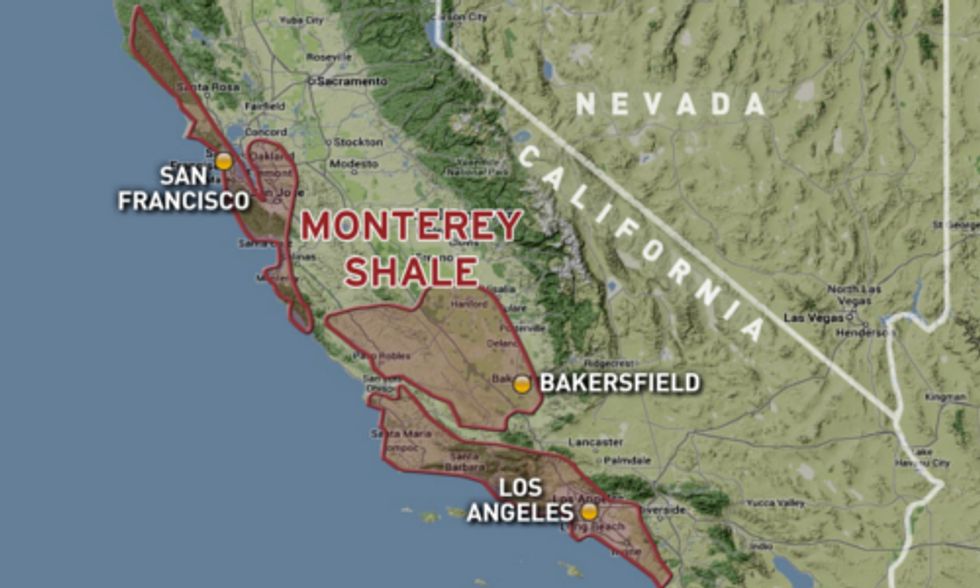 We are used to hype surrounding the oil industry and potential lucrative reserves, but this is unbelievable and ultimately humiliating for the U.S. authorities and oil industry.

According to the Los Angeles Times, the authorities have “slashed” the amount of recoverable oil from the vast California Monterey shale deposits by a whopping 96 percent.

Why this is so important is that the Monterey Shale was being hyped as the largest reserve of shale oil in the U.S. As the LA Times puts it modestly, “it had been seen as an enormous bonanza.”

The U.S. Energy Information Centre used to argue that the area, once known as a national “black gold mine” of oil, had nearly 14 billion barrels of recoverable oil in it. This has been radically reduced to just 600 million.

Someone has messed up big time. And its all down to simple geology. The last time someone examined the amount of reserves in the Monterey, they simply assumed the deposits were as easy to extract as elsewhere.

But, in reality, the Monterey is complicated, with layers of folded and shattered strata, making oil difficult to extract.

“From the information we’ve been able to gather, we’ve not seen evidence that oil extraction in this area is very productive using techniques like fracking,” John Staub, a petroleum exploration and production analyst who led the IEA’s research, tells the paper.

“Our oil production estimates combined with a dearth of knowledge about geological differences among the oil fields led to erroneous predictions and estimates,” Staub added.

“The narrative of fracking in the Monterey Shale as necessary for energy independence just had a big hole blown in it,” argues Seth B. Shonkoff, executive director of Physicians Scientists & Engineers for Healthy Energy.

Jayni Foley Hein, the executive director of the Berkeley Center for Law, Energy and the Environment, said  “Given that the industry’s promised economic benefits are not likely to materialize, the state should take a hard look at the impacts that oil development has on public health, safety and the environment.”

“The oil had always been a statistical fantasy,” added geoscientist J. David Hughes, author of Drilling California: A Reality Check on the Monterey Shale, an influential report critical of the EIA’s original Monterey estimates. “Left out of all the hoopla was the fact that the EIA’s estimate was little more than a back-of-the-envelope calculation.”

The new analysis will make sobering reading for Gov. Jerry Brown (D-CA) who had trumpeted that fracking the Monterey presented “a fabulous economic opportunity,” for California.

Gov. Brown’s credibility on the issue has been shredded, along with that of the oil industry and U.S. authorities. It will also radically change the politics of fracking in the Golden State.

The latest news “points more and more firmly to the need for a statewide moratorium, a timeout,” argues Kathryn Phillips, the director of the Sierra Club in California.