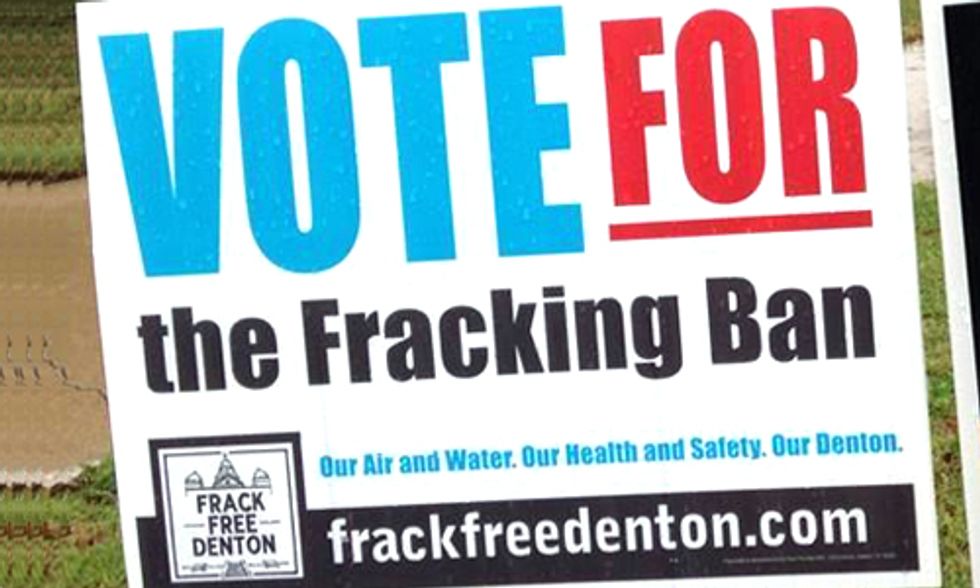 With a record number of fracking issues on local ballots in California, Texas and Ohio, the outcome was decidedly mixed. Of the eight measures—three in California, four in Ohio and one in Texas—four passed and four failed.

Denton became the first city in Texas—a state where fracking has become big business—to pass such a ban, despite threats from the oil and gas industry to sue to overturn it. And it passed overwhelmingly, 59-41 percent, despite heavy spending by the industry.

The biggest victory came in Denton in north Texas, located atop the lucrative Barnett shale play. After citizens demanded action from city council on a fracking ban and council punted last July, the issue went to the ballot where it passed last night.

"As I have stated numerous times, the democratic process is alive and well in Denton," said Denton mayor Chris Watts. "Hydraulic fracturing, as determined by our citizens, will be prohibited in the Denton city limits. The city council is committed to defending the ordinance and will exercise the legal remedies that are available to us should the ordinance be challenged."

Denton became the first city in Texas—a state where fracking has become big business—to pass such a ban, despite threats from the oil and gas industry to sue to overturn it. And it passed overwhelmingly, 59-41 percent, despite heavy spending by the industry.

"This is a victory for the citizens of the city of Denton, for our families, for our health, for our homes and for our future," said Cathy McMullen, president of citizens group Frack Free Denton. "This ban is the voice of the citizens of Denton speaking directly to the fracking industry, and local, state and national government: WE HAVE HAD ENOUGH. So try to overturn it if you will. But know that if you do, you are on the side of corporate interests and against the people."

"Denton, Texas, is where hydraulic fracturing was invented," said Earthworks energy program director Bruce Baizel. "It’s home to more than 275 fracked wells. It’s a place that knows fracking perhaps better than any other. If this place in the heart of the oil and gas industry can’t live with fracking, then who can? The answer, at present, is ‘no one.’ That’s why fracking bans and moratoria are spreading like wildfire across the country. And the oil and gas industry has no one but itself to blame. Perhaps banning fracking in Denton, Texas will finally force the oil and gas industry to clean up its act. Because blaming the impacted community is a losing strategy. It lost them Denton, and it will lose them the hearts and minds of the country."

It has also lost the hearts and minds of Mendocino and San Benito counties in California and Athens, Ohio, while California's Santa Barbara County and the cities of Kent, Gates Mills and Youngstown, Ohio weren't ready to put a ban in place.

"Mendocino County joins more than 150 communities across the U.S. that have adopted the Community Environmental Legal Defense Fund (CELDF)-drafted Community Bills of Rights to secure their unalienable rights to clean air and water, the rights of nature to exist and thrive and the rights of communities to local self-governance," CELDF said in a statement.

The oil and gas industry spent nearly $2 million in sparsely populated San Benito County, outspending ban supporters 15-1. Although there is currently no fracking in the county, fossil fuel interests were clearly concerned about the precedent it would set. In total the industry spent about $7.7 million, most of that in Santa Barbara, which is a major oil producer.

"Fracking is a dirty and dangerous way to drill for oil and natural gas," said Dan Jacobson of Environment California. "What's worse is fracking keeps us addicted to fossil fuels at the exact time we need to move to clean renewable energy. As world leaders travel to Lima Peru in December of 2014 and as more and more local cities and counties ban fracking, we need Governor Brown to reconsider his position on fracking and stop fracking in California."

Athens joins the Ohio communities of Yellow Springs, Oberlin, Mansfield and Broadview Heights, which have previously banned fracking within their city limits. That measure passed overwhelmingly with 78 percent of the vote.

“Ohio communities are challenging the corporate claimed 'right' to frack, as well as the claims of our state government that communities have no right to protect their own health, safety and welfare," said Tish O'Dell, Ohio community rights organizer at the Community Environmental Legal Defense Fund, which worked with Athens in drafting its ballot measure. "They are joining dozens of other communities across the country who are securing their inalienable right to local self-governance and to a sustainable future.”

Wenonah Hauter, executive director of Food & Water Watch concurs, "This is huge news, and an indication that more and more Americans are rejecting oil and gas industry hyperbole, as well as this destructive, toxic process."