Fracking Ban in New York Paves the Way for Other States 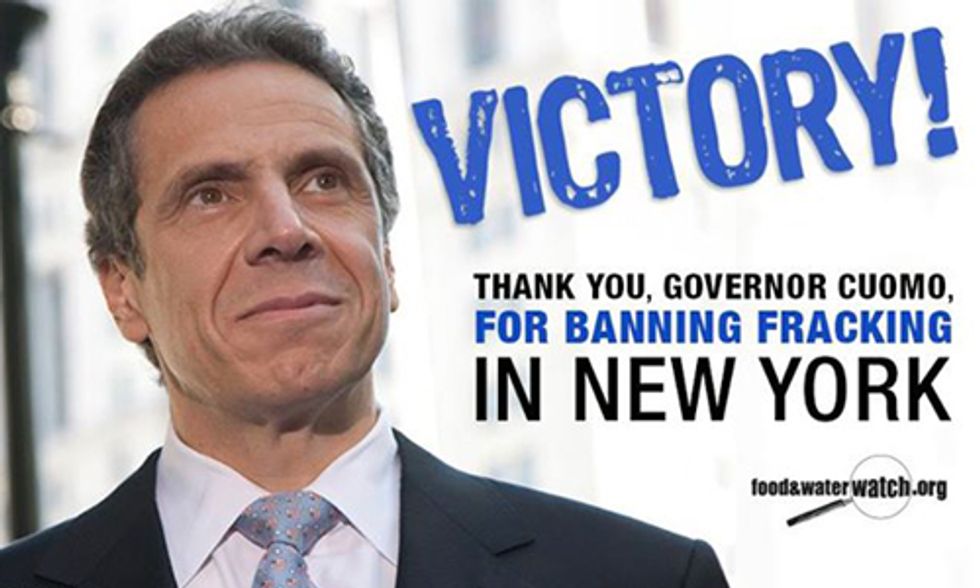 Fantastic news came from the state of New York this week when the Cuomo administration announced its decision to ban fracking in the state. This exciting decision is a tribute to everyone who has worked so hard in New York to protect the state from the ravages experienced elsewhere from fracking.

Here’s the full story: On Wednesday, the Governor convened a cabinet meeting where Acting Health Commissioner Howard Zucker presented the findings of the Department of Health’s review on fracking. He described the peer-reviewed studies showing that fracking contaminates air and water and harms health, and he highlighted that many of the long-term health effects are still unknown, as epidemiological studies have not been conducted. Comissioner Zucker ended his presentation by saying, "Would I live in a community that would allow fracking? The answer is no."

Then in this real-time drama, Joe Martens, the Commissioner of the Department of Environmental Conservation indicated the department would issue “legally binding findings to prohibit high volume hydraulic fracturing in New York.” They will be included in the supplemental generic environmental impact study that will be released in the New Year, an approach that Governor Cuomo supports, and that will effectively ban fracking in New York.

This is particularly exciting because just three years ago, conventional wisdom in New York’s mainstream environmental community held that fracking was inevitable in New York and that strong regulation was the best we could hope for. But Food & Water Watch, Frack Action, Catskill Mountainkeeper, Water Defense, United for Action, Citizen Action of New York and several other organizations joined together to launch New Yorkers Against Fracking (NYAF)—with the audacious goal of winning a complete ban in the state of New York. For the next three years, thousands of people engaged in activities around the state, from massive demonstrations, to sending in comments to the Department of Environmental Conservation on the health risks of fracking. NYAF grew to more than 250 national, state and local groups.

For the last two years, it has been impossible for Governor Cuomo to go anywhere in the state without fractivists by the dozens, hundreds, or thousands rallying outside his appearances, delivering the clear message: ban fracking now. At his polling place this November, Cuomo recognized the movement as the most powerful protest movement in the state.

I’m proud that Food & Water Watch was the first national organization to stand with the grassroots organizations and to call for a ban on fracking. This hard won victory shows that we can win when we build political power. It also shows that we can win when we organize around a clear message and an unambiguous goal. It should inspire reflection among those mainstream environmental groups reluctant to take a strong stand against fracking or those who attempt to split the difference by supporting both a moratorium and stronger regulations at the same time. We need to be clear and uncompromising in calling for a ban on fracking and other extreme extraction practices.

Governor Cuomo heeded this call, and has positioned himself as a national leader in the movement to shift to an energy policy that is safe and based on efficiency and 100 percent renewable energy. New York is a bellwether state for fracking nationally, and is the first shale state to take such bold action against fracking. This decision has implications for other states considering fracking like Maryland, Pennsylvania, California and others.

In contrast to Cuomo’s decision today, Governor of Maryland, Martin O’Malley recently released regulations for fracking in his state. The Obama Administration’s Environmental Protection Agency has refused to reopen investigations on instances of water contamination from fracking. Governor Hickenlooper in Colorado continues to oppose even communities’ ability to prevent fracking, Governor Brown in California continues to burry his head in the sand when it comes to the real health and environmental impacts of fracking, and Governor-Elect Wolf in Pennsylvania is floating a severance tax as a way for the state to make money off fracking, rather than taking on this dangerous practice.

Politicians with national influence or larger political aspirations should take note that support for fracking nationally has fallen, especially among Democrats and Independents, over the past few years. A PEW poll issued this November found that a 47 percent plurality of Americans, 59 percent of Democrats and 53 percent of Independents nationally oppose increased fracking. This ban in New York comes exactly one week after Congressman Mark Pocan (D-WI) and Congresswoman Jan Schakowsky (D-IL) introduced a bill to ban fracking on public lands, the strongest federal bill on fracking to date.

The decision in New York will have a ripple effect across the country and act to strengthen efforts against fracking nationwide. The story of how tens of thousands of fractivists fought and won in New York with their blood, sweat and tears is awe-inspiring and demonstrates that we should fight for what we want—not just the best that can be negotiated in a backroom deal or what others say is politically feasible. Instead we should work to change the political reality in order to win real improvements in people’s lives and protect our fragile planet for future generations.