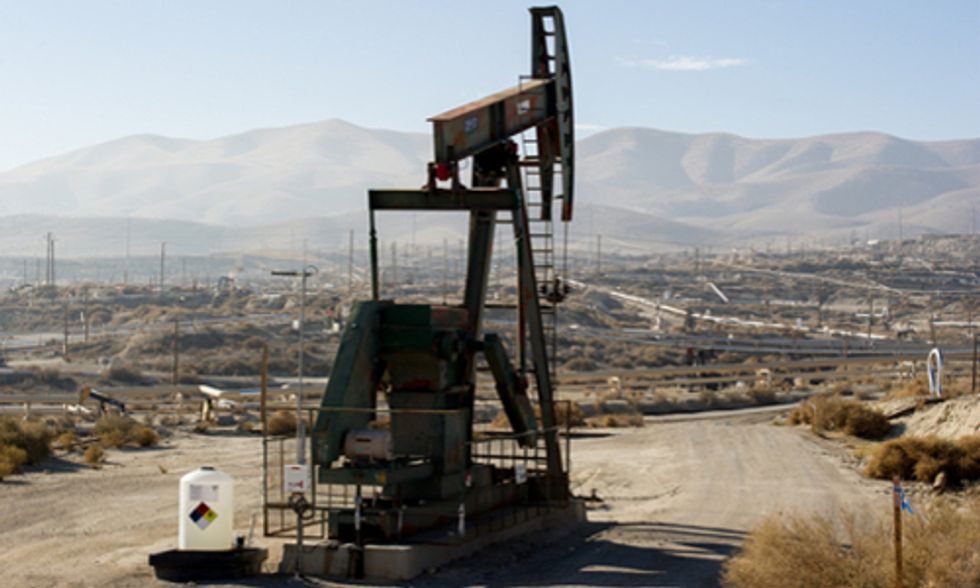 County ballot issues to ban fracking could have a large impact outside those counties. And the campaign money being spent on both sides—but primarily by big energy companies—shows how much is at stake.

The oilfields of Kern County, California, are already seeing a fracking boom. Nearby San Benito and Santa Barbara counties will vote on fracking bans in November.
Photo credit: Shutterstock

The highest profile and most contentious ban is the one on the ballot in Denton, Texas, north of Dallas, located in the heart of the Barnett shale region. Citizen groups, concerned about their families' health and safety and frustrated by the city's failure to enact any restrictions on fracking, gathered enough signatures to force city council to vote on the ban in July. After the council voted against it, the issue went to the November ballot. The battle has positioned the industry-backed group Denton Taxpayers for a Strong Economy against the community group Denton Drilling Awareness Group/Frack Free Denton. The Denton Chamber of Commerce and the Denton County Republican Party have come out against the ban.

This ballot initiative has gotten extensive media coverage in the region because of its implications for Texas' burgeoning fracking sector, and industry fears that such bans could spread in this oil- and gas-rich region. Opponents of the ban have suggested that if it is passed, oil and gas interests will sue the city for an unconstitutional taking of property rights. State representative Phil King has said he will introduce a bill in the next session of the Texas legislature to prohibit  local governments from banning fracking.

The Fort Worth Star-Telegram reported this weekend that Denton Taxpayers for a Strong Economy has collected $75,000 apiece from energy companies Devon Energy, XTO and Enervest Operating, making up the bulk of the $231,000 the group has raised. Only eight other donors are listed. It said the pro-ban group has raised about $50,000, with $30,000 coming from environmental group Earthworks, which an anti-ban spokesperson called an "extreme liberal fringe group out of Washington, D.C." Earthworks told the Dallas News that 90 percent of the funds, generated by an online fundraiser, were contributed by Denton residents. Denton has a population of about 113,000.

Andrew Wheat, research director of Texans for Public Justice, a nonpartisan nonprofit that tracks the impact of money and corporate power in Texas politics, told the Dallas News, “The influence of the industry is pervasive. To the extent that there is any effort to regulate these activities, it’s coming from the grassroots local government, it’s not coming from Austin.”

In California, three counties have anti-fracking measures on the November ballot. San Benito County, located in the central coastal region with a population of just over 50,000, was the first county to approve such a ballot measure. Santa Barbara and Mendocino counties have followed with their own measures, and Butte County is considering one for 2016. Santa Barbara, with a population of more than 400,000, is the most significant of these. Santa Cruz County's board of supervisors banned fracking there in May.

As in Texas, these initiatives are being looked at by the energy industry and anti-fracking groups as a bellwether. The San Jose Mercury News says that a coalition funded by oil companies like Chevron, ExxonMobil and Occidental Petroleum has given nearly $2 million to the campaign to block the ban in San Benito County and $5 million to the effort in Santa Barbara County. In San Benito, it's outspending pro-ban groups by a 15-1 margin, the paper reports.

Again, the sides are wrangling about the health and safety of residents vs. property rights, as well as protecting the region's natural beauty—San Benito County includes Pinnacles National Park. In addition, ban opponents scoff that since there's no fracking in the county now, the ban is pointless. Ban supporters point out that San Benito sits on part of the state's oil-rich Monterey Shale deposit, which could be developed in the future. Kern County, adjacent to Santa Barbara County and just south of San Benito, is already being heavily fracked. And as in Texas, community groups are acting in the absence of state regulation.

"We need Governor Brown to put an immediate halt to fracking statewide," attorney Kassie Siegel of Center for Biological Diversity told the Mercury News. "But until he does, we are going to see more local governments and local residents going forward with measures to protect themselves."