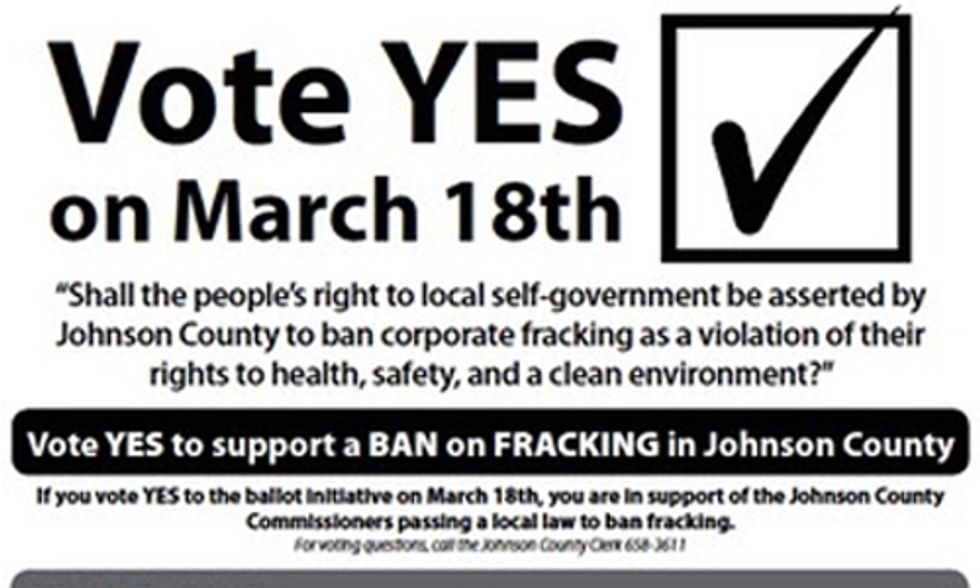 As the national media puts the spotlight on the "FrackGate" public relations scandal in Ohio, where state officials worked to “marginalize opponents of fracking by teaming up with corporations—including Halliburton—business groups and media outlets," Illinois residents behind a ballot initiative to ban fracking in rural Johnson County are facing a similar campaign of misinformation and local news blackout.

It's bad enough that Illinois' flawed state fracking regulations have spiraled into a widely denounced phase of disarray and confusion.

Until last Friday, the Vienna Times/Goreville Gazette newspaper company, the only local newspapers in Johnson County's treasured Shawnee National Forest heartland, had provided fairly balanced coverage of the fracking debate, including the county commissioners' decision last May to support a one-year moratorium on the controversial fracking process, as out-of-state corporations like Kansas-based Woolsey Energy swept up land leases.

Two of the three Johnson County commissioners, in fact, had encouraged residents last fall to draw up their own "simple" ballot initiative to gauge the "will of the people."

Sounds reasonable and democratic, no?

But now, with the same local citizens group's non-binding ballot initiative gaining widespread support across the county from residents especially concerned about the threat of involuntary "forced pooling" from neighboring leases, the Vienna Times/Goreville Gazette has suddenly announced—according to local residents—a new policy to refuse all anti-fracking ads, letters to the editor or news releases, even as it accepts ads and press releases from an Orwellian campaign set up to dismiss the community rights-driven campaign against absentee fracking corporations as a "radical agenda of out-of-state interests."

Since when are local farmers called "out-of-state" and absentee fracking corporations considered homeboys?

And since when has this ad become too dangerous for the Vienna Times?

Instead, featuring Shawnee Professional Services president Mitch Garrett and Johnson County Commissioner Ernie Henshaw—who had originally voted for the one-year moratorium and asked for public input—the Vienna Times/Goreville Gazette celebrated the kick-off of an opposition group to the county citizens initiative on its front page this week, and included an ad with a direct link to opposition's Facebook page:

Service owner Mitch Garrett worked together on another hot issue: Ridding the town of stray cats.

And now, what about what the fracking cats about about to drag in? As in debunked and clearly exaggerated job promises, and the onslaught of the well-documented fracking reality of industrial traffic, workplace accidents and injuries, massive amounts of pollution and toxic discharges risking public health and potential earthquakes?

"I’ve never quite grasped how much power the oil and gas industry has until now. What they are doing to manipulate the vote makes me angry and sad. And, what industry has not begun to understand is that there are plenty of us, and more all the time who will never, never give up," said Annette McMichael, communications director for the Southern Illinoisans Against Fracturing Our Environment citizens groups, and a resident and landowner in Johnson County.

"The best way to have discussion is in open dialogue, solved in an equal and democratic fashion," said Johnson County vegetable farmer Kris Pirmann, who is active in the community rights ballot initiative. "Open discourse is the only legitimate and democratic way, and shutting down one side is not open discourse."

Not so, says the local media. The Vienna Times/Goreville Gazette failed to answer multiple queries about its new policies. But local residents noted a new sign at the newspaper office, with a warning signed by Vienna Times publisher Hinton: "We reserve the right to accept or reject material submitted for publication, including letters to the editor, news releases and advertising."

“Shall the people’s right to local self-government be asserted by Johnson County to ban corporate fracking as a violation of their rights to health, safety, and a clean environment?”
"This ballot initiative is led by a local group of people of common concerns, Johnson County resident, many who are third or fourth generation farmers," said Pirmann, the Johnson County vegetable farmer, who noted that more than 1,000 county residents signed a petition for the ballot. "The argument that this initiative is hijacked from the outside doesn't hold any water."

Long adds: "A Community Bill of Rights is a community-tailored document. It's made up of two main parts: 1) a section that asserts the rights of the community, including the right to local self-governance, the right to clean air, and the right to clean water; and 2) an enumeration of activities that violate those rights, and therefore are prohibited in the community. Because a Community Bill of Rights is drafted with each particular community, that means that no two documents are the same. Instead, they reflect the priorities of the community. In this case, Johnson County citizens are hard at working crafting language that focuses specifically on prohibiting hydraulic fracturing—nothing else. Any claim otherwise is both misguided and false."