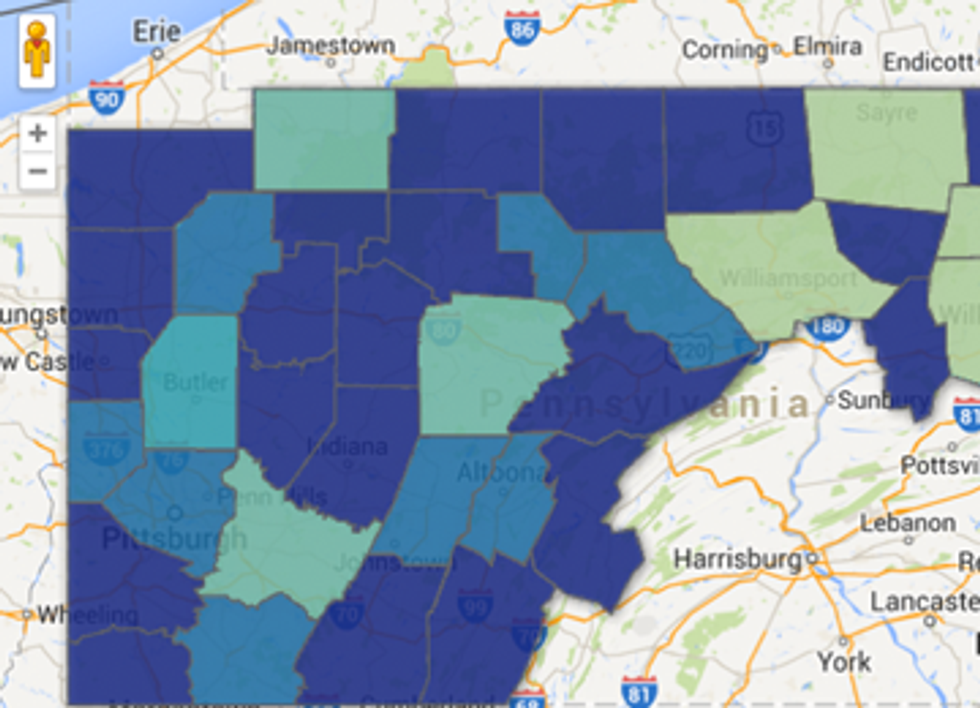 Exactly two weeks ago, we officially launched the first stage of our new skytruthing initiative—FrackFinder: Project TADPOLE. Since the launch, our amazing volunteers have taken the project from 10 percent complete to 73 percent complete; that's over 64,000 completed tasks (task = number of times an image is viewed and classified).

On our website is a live, interactive map that illustrates, by county, the progress that our FrackFinder volunteers have made toward completing all tasks for Pennsylvania. So far, we have focused on natural gas drilling and fracking in the Marcellus Shale region of William Penn's woods. Now, we are working on preparing the next stage of this project, which expands FrackFinder to the Marcellus Shale region in another state—West Virginia.

We continuously keep the lines of communication open with our volunteers and have gotten some great feedback. One volunteer shared with us an image that seems at first to be a bad photoshop job. The image, shown below, was captured by an aerial survey in 2010 over a permitted well pad in Butler County, Pennsylvania. However, while it looks electronically manipulated, we believe that the image is really a sort of  real-world photoshop called hydroseeding. Hydroseeding is a reclamation process that involves spraying a slurry that contains seeds, fertilizer, mulch and/or soil stabilizer, etc., on bare Earth to help re-vegetate and prevent erosion.

While they missed a few spots, suggesting the job was done haphazardly, partial hydroseeding is at least better than leaving re-graded slopes bare and susceptible to erosion. More current imagery, found in Google Maps, shows the vegetation beginning to grow back in patches and at least part of the site plowed for agriculture.

Have you seen anything out of the ordinary or interesting while using FrackFinder? Send us a screen capture of the image in question, including the location data—county, year and the latitude/longitude coordinates—directly above and below the image. Also, if you would like to be a part of preparing and refining the the next stage of FrackFinder, please contact us.