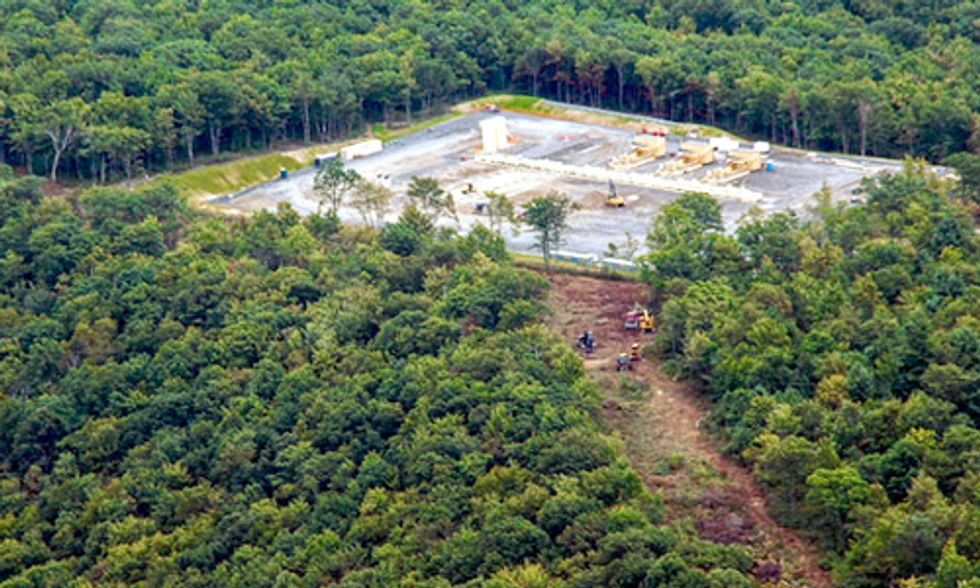 In light of an increasing number of studies showing that fracking produces toxic emissions that have serious human health impacts throughout the entire process, Pennsylvania Congressman Matt Cartwright, a first-term Democrat, has opened an investigation into how toxic wastes from fracking are regulated.

What's at stake. Fracking has grown at a rapid rate in Pennsylvania, and operators are increasingly eying the state's public parks and forests while sit atop a major shale play.
Photo credit: EcoFlight

"Preliminary reports indicate there are big gaps in protections and oversight that the federal government might have to fill," Cartwright told Inside Climate News.

Fracking is big business in Pennsylvania. As a result of its exponential growth in the last decade, the state is now the third largest producer of natural gas in the U.S. after Texas and Louisiana. But among the many questions surrounding such operations is how the wastewater—the mix of water, chemicals and sand used to blast open the shale—is disposed of. The waste has become something of a hot potato, with many states banning its disposal within their borders. Pennsylvania was among the states which tightened up its regulations so much of its waste is trucked to Ohio.

"Waste is like the forgotten stepchild of the fracking boom," said Nadia Steinzor, eastern program coordinator for environmental nonprofit Earthworks. "It's great that Congressman Cartwright is calling out the state of Pennsylvania on this issue."

While Cartwright wants to find out whether Pennsylvania is complying with the Clean Air Act and has written to Pennsylvania's Department of Environmental Protection (DEP), requesting information on whether state policies and monitoring are adequate to do so, the problem is much larger than Pennsylvania. And Cartwright said his investigation is a "first step in a comprehensive nationwide investigation."

A fracking operation in this public forest endangers land set aside for the enjoyment of all citizens, opening it to the risk of toxic waste spills, among other things.
Photo credit: EcoFlight

"We don't know very much about what happens to these wastes and what impacts they may have, and it's important for Congress to take a look at this issue that does not get the attention it deserves," Cartwright told InsideClimate News.

That news won't make the gas and oil industry very happy, which doesn't feel it deserves any attention.

Inside Climate News published an investigation earlier this month that found air emissions from oil and gas fracking waste, often dumped in open pits because it's the cheapest way to dispose of it, are under-monitored, under-regulated and under-researched. The roots of that lack of oversight go back to 1988 when the oil and gas industries successfully lobbied to exempt their waste from federal hazardous waste regulations. The exemption was granted despite a U.S. Environmental Protection Agency study that found that 23 percent of the waste samples collected contained one or more toxic compounds at levels 100 times greater than those considered safe for humans and acknowledged that regulation was uneven, saying there were "valid reasons" for that. In the end, it decided that existing state and federal regulations were adequate, and that delays caused by additional regulation "would be particularly disruptive to the exploration phase of oil and gas development.

In other words, business over human heath impacts.

Cartwright, who made a campaign promise to ensure that fracking didn't cause pollution harmful to human health, has already introduced legislation to repeal the 1988 exemption. He cited a 2011 minority staff report of the House Energy and Commerce Committee that found 29 potentially carcinogenic chemicals in fracking waste that are regulated under both the Clean Air Act and the Safe Drinking Water Act. And he pointed to a report from earlier this year by the Pennsylvania auditor general saying the state's oversight of fracking waste "is not an effective monitoring tool" and "is not proactive in discouraging improper, even illegal, disposal of waste."

Cartwright's bill, Closing Loopholes and Ending Arbitrary and Needless Evasion of Regulations Act (CLEANER), would regulate numerous drilling wastes including used fracking fluid. His committee has set a Nov. 12 deadline for answers to more than a dozen questions about how Pennsylvania oversees the handling and disposal of fracking waste.

"If the investigation demonstrates a serious lack of accountability and regulations at the state level, it will only reinforce the necessity of passing the CLEANER Act," he told Inside Climate News.