Frac-Sand Mining: Is British Columbia the Gas Industry's Next Wisconsin? 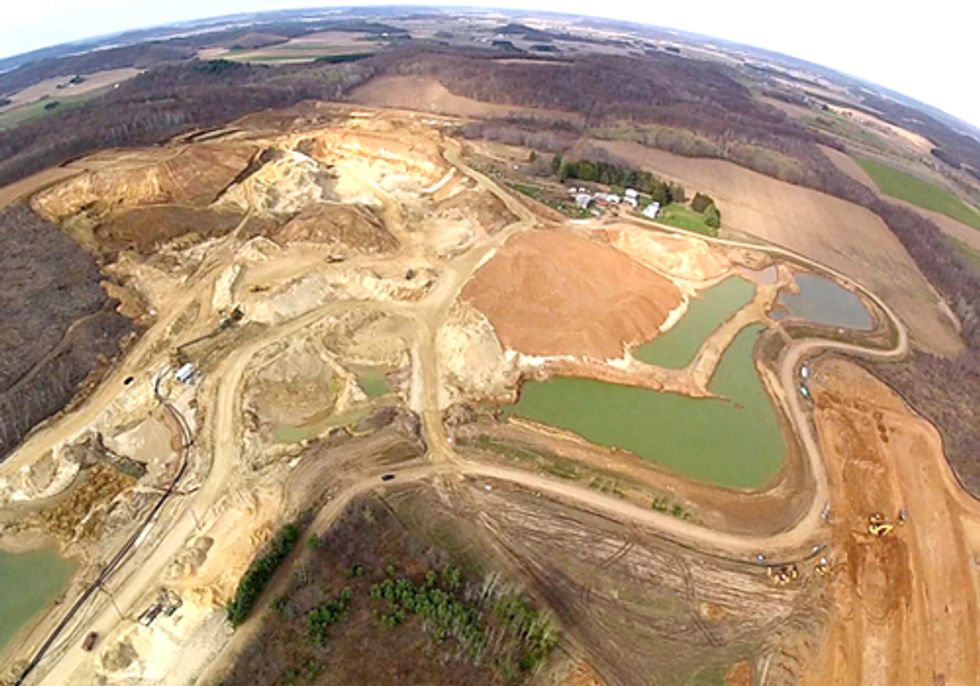 Stikine Gold Mining Corp. will provide unconventional gas producers with British Columbian silica sand for fracking operations if the Ministry of Forests, Lands and Natural Resource Operations approves the company's open pit frac-sand mine project application. According to the Ministry's website the project, located 90 kilometers north of Prince George, is in pre-application status with the Environmental Assessment Office.

If granted approval, Stikine could gouge a 5 kilometer wide and 200 meter deep hole in the region's sandstone shelves, dismantling what works as a massive natural water filtration system in order to benefit an industrial enterprise that removes millions of gallons of freshwater from the earth's hydrogeological system each year. This is done as an intermediary step towards fracking for unconventional gas, an energy-intensive, heavy industrial process that will ultimately release high levels of greenhouse gasses into the atmosphere.

"Stikine's new focus on the potential production of Frac Sand from silica sources in north eastern BC (NEBC) represents a strategic opportunity in the market and a first for what is shaping up to be a massive gas play in region," the company announced on its website.

Frac-sand mining is an often overlooked component of hydraulic fracturing operations. Producers use a mixture of sand, water, and chemicals to blast open shale gas deposits, such as those located in northeastern BC. Fracking opponents often point to the toxicity of fracking chemicals, the possibility of groundwater contamination and high levels of fugitive methane emissions associated with the process to demonstrate the high environmental footprint of the industry-lauded 'clean' energy source.

The role sand plays in fracking is often overshadowed by these more widespread problems that follow the process to each well-pad, affecting communities at the local level. However, giving more thought to the industry's need for sand—a single well can use between 2 and 5 million pounds of sand—sheds light on just how destructive fracking is, right from inception.

As DeSmog's Steve Horn reported this summer in his investigative video report Sand Land, mining for frac-sand is associated with serious ecological dangers and threats to human health. Most egregious on the human health level is the risk of silicosis, a respiratory condition associated with silica particulate which shreds lung tissue causing permanent scarring. Because silica dust is carcinogenic, the condition is often associated with cancer.

Left: Image of sharp silica dust from Jim Tittle's The Price of Sand. Right: Stikine sample of BC silica sand used in fracking operations. Fine silica particulate matter, of the sort pictured on the left, is released into the air during mining and processing of rounded frac-sand grains, pictured right, sought after by the gas industry.

The impact of sand mining is far reaching ecologically. Pastoral landscapes, like those previously found around Wisconsin's Chippewa county, have been transformed into post-mining wastelands. According to Grist, the mining industry took Chippewa by storm in 2009, producing 6.5 million metric tons of sand that year alone. Between 22 and 36 frac-sand facilities were either open or approved in Wisconsin as of July 2011. That number catapulted to a total of 60 mines and 45 sand-refining plants by February 2012, only seven months later.

This summer the state's Department of Natural Resources estimated corporations are mining at least 15 million metric tons of sand annually in Wisconsin alone.

Is BC the Gas Industry's Next Wisconsin?

Companies operating in the region currently spend hundreds of dollars per tonne to import frac-sand from thousands of kilometers away, according to Stikine, a gold mining company that sees sand as an easy way to cash in on BC's fracking boom.

Sattelite images demonstrate how tremendous industry's impact has already been on the region's landscape.

Google map images of Stikine's proposed frac-sand open pit mine location. The coordinates
of the mine project, named Angus, are made available on the Ministry's website.

Stikine's sights may be set on additional future frac-sand mines. The company's map below outlines BC's quartz deposits, all of which may prove suitable for frac sand mining.

The crucial question is whether or not British Columbia is prepared to level vast swaths of the province's prized forests to feed the fracking fire.