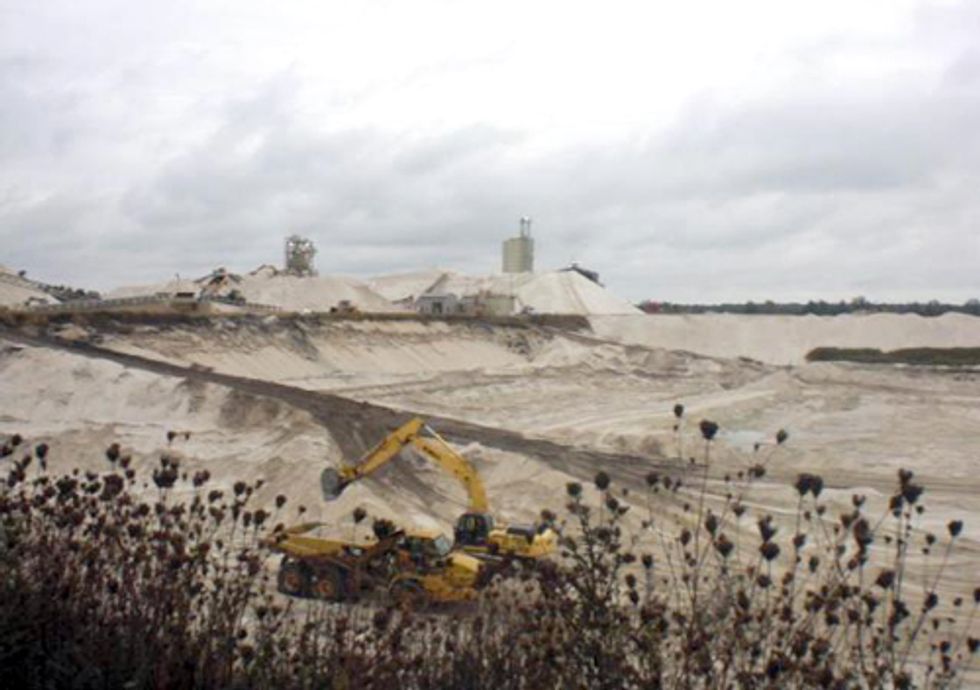 The rush to drill for unconventional gas, enabled by a process popularly known as fracking, or hydraulic fracturing, has brought with it much collateral damage. Close observers know about contaminated water, earthquakes and climate change impacts of the shale gas boom, but few look at the entire life cycle of fracking from cradle to grave.

Until recently, one of the most underlooked facets of the industry was the "cradle" portion of the shale gas lifecycle: frac-sand mining in the hills of northwestern Wisconsin and bordering eastern Minnesota, areas now serving as the epicenter of the frac-sand mining world.

The silence on the issue ended after several good investigative stories were produced by outlets in the past year or so, such as Wisconsin Watch, PR Watch, The Wisconsin State Journal, the Associated Press, The Wall Street Journal, Orion, EcoWatch and most recently, Tom Dispatch. These various articles, all well worth reading, explain the land grab currently unfolding in the Midwest and the ecological damage that has accompanied it.

To put it bluntly, there could be no shale gas extraction without the sand. As Tom Dispatch's Ellen Cantarow recently explained,

That sand, which props open fractures in the shale, has to come from somewhere. Without it, the fracking industry would grind to a halt. So big multinational corporations are descending on this bucolic region to cart off its prehistoric sand, which will later be forcefully injected into the earth elsewhere across the country to produce more natural gas. Geology that has taken millions of years to form is now being transformed into part of a system, a machine, helping to drive global climate change.

Frac-sand, which consists of fine-grained sillica, can cause the respiratory illness silicosis. Washing the frac-sand in preparation for the fracking process is also a water intensive process, particularly threatening in the age of increasing water scarcity in the U.S. and around the world.

"The state's water supplies are also threatened as sand mining destroys sandstone formations which serve as giant filters for local aquifers," Sara Jerving of PR Watch wrote. "The mining process can use thousands of gallons of water which can also deplete aquifers."

The "frac-sand rush" has been an uphill battle for small towns and municipalities that are trying to fight, or at the very least, attempting to negotiate with large corporations, with comparatively little governmental oversight to deal with corporate behemoths such as EOG Resources, mirroring in many important ways the shale gas rush.

Cities and concerned citizens have done their best to keep up with the boom, but have no precedent to look for, no previous legislation to protect themselves, their infrastructure (see: roads and heavy trucks rolling through), their groundwater or their air.

To further introduce the world to the impacts of frac-sand mining, DeSmogBlog presents Sand Land, a short video report filmed and produced by Milwaukee, Wis. photojournalist and filmmaker Spencer Chumbley of 414 Wire, and co-reported on with DeSmogBlog Research Fellow Steve Horn. The film serves as a short audio-visual primer on the issue. We encourage you to watch and share it with friends, colleagues and family.

Stay tuned for much more to come from DeSmogBlog on one particularly powerful sand-mining corporation, EOG Resources, formerly known as the now infamous Enron Oil and Gas, a little explored fossil fuel industry giant that does it all: frac-sand mining, fracking, pipelines and LNG terminal.