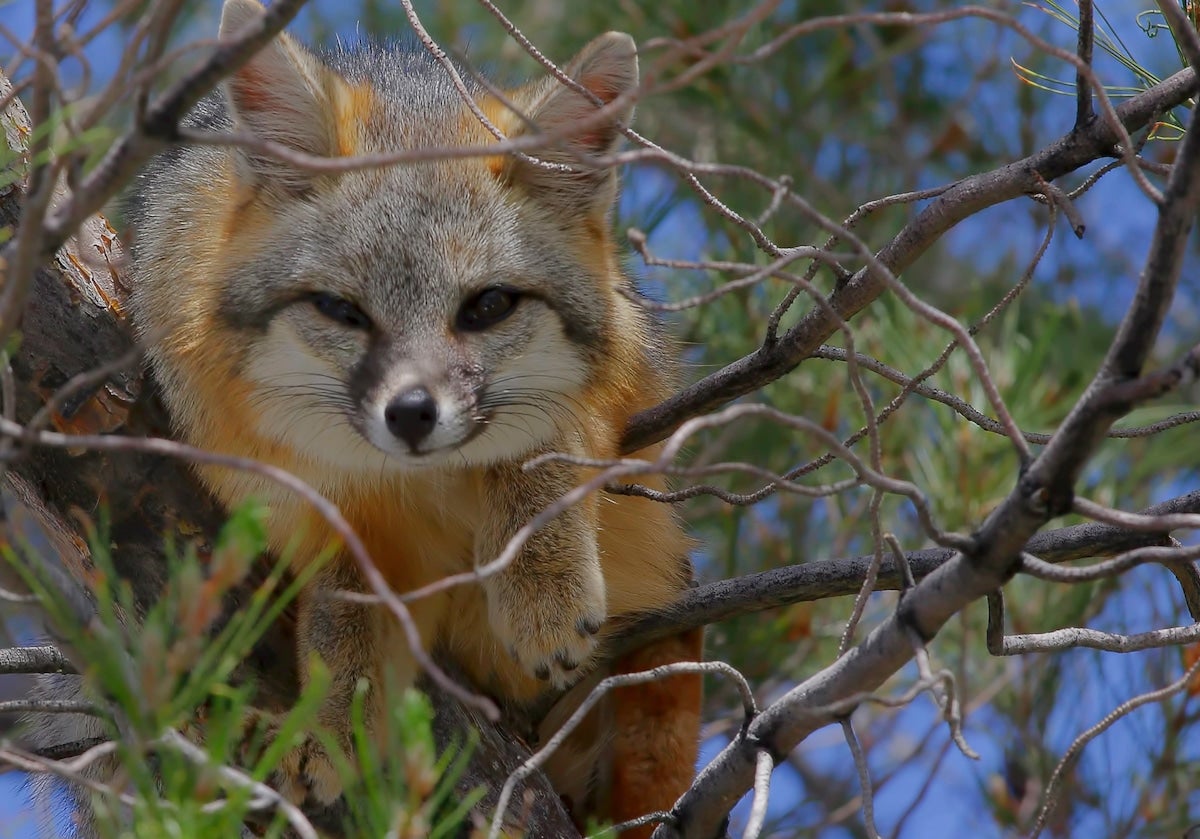 Although gray foxes are in the dog family, they are more like cats in how they climb trees. wildmanaz / iStock / Getty Images Plus

Foxes are known for being fast and clever, but one species of fox has another, little-known trait that can help them survive alongside coyotes: gray foxes can climb trees.

A new study has found that the presence of trees might help gray foxes survive alongside coyotes in the countryside, and that’s likely because of their unique ability to climb trees. The study, “The effect of urbanization on spatiotemporal interactions between gray foxes and coyotes,” was published in the journal Ecosphere.

Though gray foxes are in the dog family — and are related to wolves and coyotes as well — they are more cat-like than many people realize.

“The super cool thing about gray foxes that most people don’t know is that they are the only member of the dog family that have retractable claws!” postdoctoral research associate at North Carolina State University and the lead author of the study Arielle Parsons told EcoWatch in an email. “The claws are not quite fully retractable like a cat’s, they are semi-retractable. This allows the foxes to keep their claws from getting dull as they walk around, keeping them nice and sharp for climbing, something that other members of the dog family, like red foxes and coyotes, cannot do. This gives gray foxes a unique escape mechanism if it comes into conflict with a coyote and underscores how tree cover may be especially important to the coexistence of these two species.”

Coyotes and gray foxes can both be found all over the U.S., though their highest population numbers are in different parts of the country, according to Parsons.

“Both species occur throughout the United States from coast to coast, but coyotes are more common in the west and gray foxes become more common as you go further south, being absent from some northwestern regions,” Parsons said.

Before European expansion into the U.S., there were greater numbers of large carnivores like wolves and cougars. Coyotes mostly inhabited the west and there were plentiful forests where gray fox populations may have been higher.

“There are a couple of big difference[s] on the landscape before Europeans expanded across the USA: more wolves and cougars, more forests and less urbanized habitats. Wolves and cougars do a good job of limiting coyote populations and when they were present before European expansion, coyotes were mostly relegated to the western part of the country,” said Parsons. “Only since the extirpation of these species have coyotes appeared able to expand eastward. There has been far less research on gray foxes so it’s a bit harder to say, but we know they are most successful in forested habitats, so more forests and fewer coyotes may have supported higher gray fox populations before human expansion, especially in the south and east.”

As coyotes have moved eastward, they have become more of a threat to the gray fox.

“Coyotes are well known to persecute smaller foxes,” said director of the NC Museum of Natural Sciences Biodiversity & Earth Observation Lab Roland Kays, who was co-author of the study, as Phys.org reported. “They go out of their way, more than you see in other interactions between species, to really bully, chase and kill the smaller foxes. There is some reason for concern if this species is going to survive.”

The researchers wanted to find out what the impact of coyotes might be on gray foxes in their native environment, especially with the fragmentation of habitat and interference with food sources due to urbanization.

In urban areas, foxes are pretty common, possibly due to the relatively low number of coyotes, Parsons said, as reported by Phys.org.

In order to determine where coyotes and gray foxes coexist in parts of rural, suburban and wild North Carolina, the researchers employed camera traps. They discovered that gray foxes can live alongside coyotes in suburban areas that have fragments of forest, but that they steer clear of rural areas inhabited by coyotes if there aren’t enough trees.

Photos taken in areas from suburbs to wild spaces were used by the researchers to put together a model that showed the likelihood of coyotes and gray foxes being together and under what circumstances.

“These two species were more likely to use the same sites in suburban areas, especially small forested wood lots,” said Parsons, as Phys.org reported. “We expected them to use these wood lots at different times to avoid each other, but actually we found that they use these suburban forest fragments at the same time.”

The researchers speculated that, because the coyotes were only passing through in the suburbs, there weren’t too many of them there relative to other areas.

“If they’re just moving through, they may not be as prone to direct competition, or bullying of the gray foxes, or their movements are hard for the gray foxes to predict,” Parsons said, as reported by Phys.org. “We also think gray foxes might not have a good way to avoid coyotes consistently in suburbs, since habitat is scarce, or avoidance isn’t necessary given abundant suburban resources.”

“They’re one of the only dog relatives that can climb trees. Coyotes can’t. It could be that climbing trees helps them deal with coyotes,” said Kays, as Phys.org reported.

It was less likely that gray foxes and coyotes would be seen together in rural areas, though as trees became more abundant, gray foxes were more likely to be found.

“In rural areas, where we’re seeing gray foxes spatially and temporally avoid the coyotes, that’s where we could see some impact on the gray fox population,” said Parsons, as reported by Phys.org. “It could mean the coyote is outcompeting, bullying or even killing gray foxes there. A strong competitive relationship may result in gray foxes not being able to access high quality areas, forcing them to establish themselves elsewhere where resources may not be as abundant. That could be a mechanism behind a decline.”

One of the things that brings coyotes and foxes together in the same environments is that they tend to seek out much of the same prey.

“Gray foxes and coyotes have a similar diet, which is a large part of what brings them into conflict – they are direct competitors. Both species eat a lot of small mammals (rodents, squirrels, rabbits) and other small prey like birds, snakes etc.,” Parsons told EcoWatch. “They also both eat fruits where available. Gray foxes do not take down larger prey, but coyotes, especially in packs, are capable of preying upon larger animals like deer.  Coyotes may also prey upon fox puppies, but the opposite is not true.”

Coyotes and gray foxes each have important roles in the ecosystems they share with each other and other species.

“Since small mammals make up a large portion of both species’ diets, they are very helpful in keeping rodent pest species in check which can have benefits both where people live and in agricultural areas. They also compete with smaller carnivores like raccoons and opossums, helping to keep their numbers under control. So, they have an important role in maintaining the ecological balance,” said Parsons.

What can humans do to help foxes and coyotes coexist?

“Both species do live near humans but are quite shy, keeping to green spaces and wooded areas,” Parsons told EcoWatch. “People can help these species navigate suburban areas safely and coexist with minimal conflict by maintaining natural, wooded areas on their properties and promoting the conservation of wooded green spaces in their communities.”

How can humans better coexist with the foxes and coyotes that might want to share the areas around where they live?

“Since both species can be common in suburban areas, there can sometimes be conflict. Typically, these conflicts are indirect since both species are quite shy and avoid any direct interactions with people. Where this may change is if people are feeding wildlife which may reinforce bolder behavior, this is a big part of why we discourage wildlife feeding,” Parsons said. “Furthermore, both species are carriers of diseases that can affect humans or pets so encouraging them to approach your home by feeding is not the best decision for human health, allowing them to stay naturally shy is the best policy. Indirectly, gray foxes and coyotes do like eating chickens and chicken eggs so they can be problematic for people who have backyard coops, and they may also raid gardens and compost piles. Enhanced protection measures for those items is a good idea if you have foxes or coyotes in your area.”