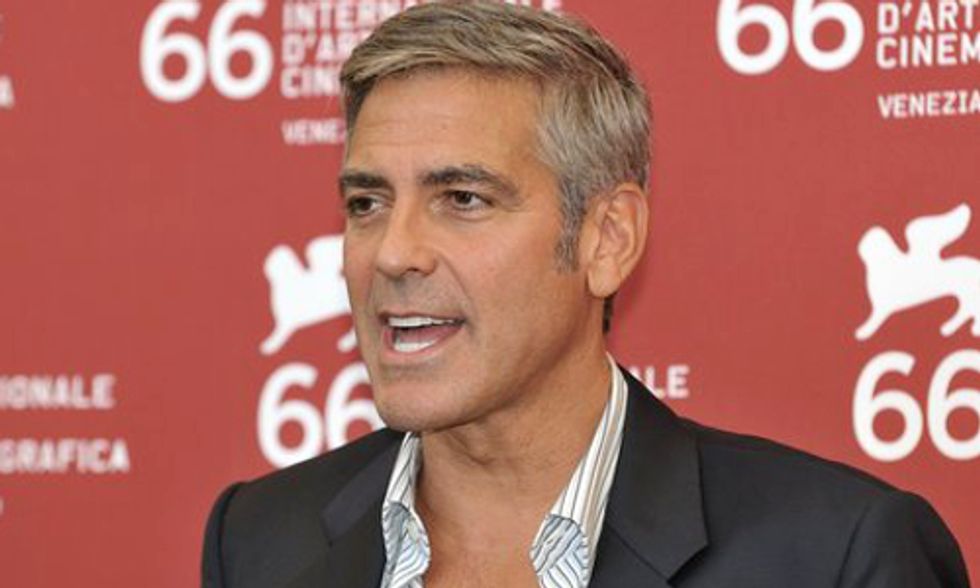 Fox Business disparaged actor George Clooney as "irresponsible" and "foolish" for allegedly "blaming" Super Typhoon Haiyan on climate change. However, Clooney merely stated that regardless of "whether or not this particular storm" can be attributed to climate change, denying the existence of manmade climate change—as those censuring Clooney have—is "ridiculous."

In an apparent response to a question about the typhoon, Gravity co-star Clooney criticized those who ignore the vast majority of scientists on climate change:

Well it's just a stupid argument. I mean, whether or not this particular storm is any one—if you have 99 percent of doctors who tell you 'you are sick' and one percent that says 'ah, you're fine,' you probably want to hang out with, check it up for the 99. You know what I mean? I—the idea that we ignore that we are in some way involved in climate change is ridiculous. What's the worst thing that happens? We clean up the earth a little bit? And you know, yeah, I find this to be the most ridiculous argument ever.

On Monday, Fox Business host Stuart Varney and Fox News' senior meteorologist Janice Dean harangued Clooney for supposedly "us[ing] the tragedy to push his climate change agenda," saying his statement was "irresponsible" and "foolish"—without ever airing or quoting what he actually said.

Dean also criticized Clooney for weighing in on climate change because he does not have a "seal of approval" from the American Meteorological Society (AMS), as she does. However, AMS officials have criticized broadcast meteorologists such as Dean for offering "nonscientific" opinions on climate change:

Increasing numbers of broadcast meteorologists, to whom the public looks for information and guidance on climate change and global warming, are not offering scientific information but rather, all too often, nonscientific personal opinions in the media, including personal blogs. Alarmingly, many weathercasters and certified broadcast meteorologists dismiss, in most cases without any sold scientific arguments, the conclusions of the National Research Council, Intergovernmental Panel on Climate Change and other peer-reviewed research.

Dean, who has no educational background in climate science (a field significantly different from weather forecasting), previously promoted the counter-scientific idea that the globe may be cooling based on a single year's data in a FoxNews.com blog. Varney, the host of Fox Business' Varney & Co., has also denied climate change in the past, calling it a "scientific conspiracy," although in 2012 he acknowledged that a study provided "hard evidence" of climate change.

Fox Business was not the only one in the conservative media to jump on Clooney's comments. The Blaze said that "left-wing" Clooney "used the deadly Super Typhoon to slam climate-change skeptics" (capitalization removed), citing the popular conservative aggregator Weasel Zippers, which called Clooney "ignorant and self-righteous."