Fox News to Pruitt: Is Draining the Swamp Renting From a Lobbyist? 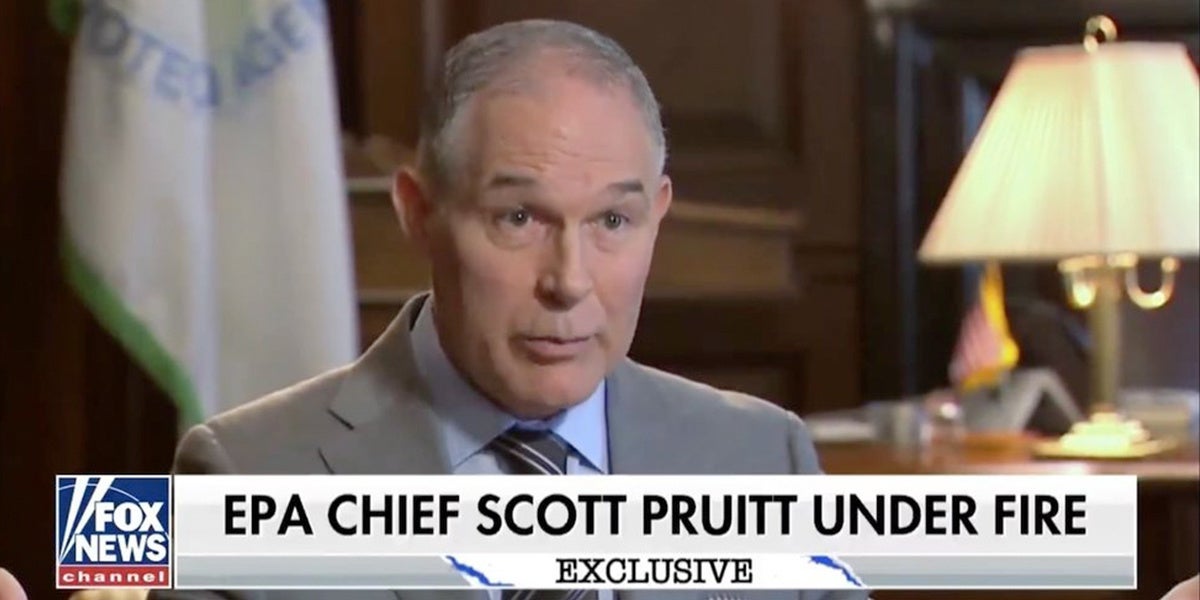 If
Scott Pruitt thought Fox News would go easy on him, he was wrong. In an heated sit-down with correspondent Ed Henry, the embattled U.S. Environmental Protection Agency (EPA) Administrator was on the defense about his latest scandals.

Henry asked about
The Atlantic’s report that the EPA used a provision in the Safe Drinking Water Act to give two of Pruitt’s closest aides large pay raises in defiance of the White House.

But Pruitt claimed he did not know about the salary bump until Tuesday.

“I found out about this yesterday, and I corrected the action,” Pruitt said.

WATCH: @edhenry sits down with EPA Chief Scott Pruitt to discuss controversial pay raise for two of his staff members, condo rental from the wife of a lobbyist https://t.co/2Cp7Sd5xpE pic.twitter.com/2M4oHUAaE6

Henry then grilled the environmental chief about his alleged
$50-a-night condo rental from an oil lobbyist’s wife.

“Didn’t President Trump say he was gonna drain the swamp?” he asked Pruitt. “Is draining the swamp renting an apartment from the wife of a Washington lobbyist?”

“I don’t even think that that’s even remotely fair to ask that question,” Pruitt replied.

Pruitt also insisted to
The Washington Examiner on Tuesday that paid a market rate for the Capital Hill condo.

In response to the Fox interview, Sierra Club executive director Michael Brune said, “Pruitt could not even save himself from humiliation on Donald Trump‘s favorite news outlet by lying. Pruitt knows he’s in hot water with Trump for directly defying him and is saying and doing anything to save his job. Pruitt has said he’s dumbfounded by the outrage around his scandals. We continue to be dumbfounded as to how he still has is job.”

“He appeared 12 times on Fox News during his first six months in office, twice as many times as he appeared on CNN, MSNBC, ABC, CBS, and NBC combined. The hosts at Fox and other right-wing outlets often ask Pruitt softball questions, giving him a comfortable platform from which to repeat his favorite talking points and push items on his agenda. Pruitt made some of his earliest mentions of his idea to create a sham
red team/blue team exercise on climate science on The Savage Nation, a fringe right-wing talk show hosted by conspiracy theorist Michael Savage, and on the Breitbart News Daily radio show.”

But could the tide be finally turning against the scandal-plagued EPA boss?

Earlier this week, news emerged that Fox News was the only media organization invited to the administrator’s announcement of his plan to
ease Obama-era auto efficiency standards. However, the channel ending up tipping off other news outlets about the announcement.

Scott Pruitt tried to let only a Fox camera into the room for his announcement today on reducing fuel efficiency standards, CNN reports; Fox informed its competitors, and they created a pool. Pruitt also did not nivite most reporters who cover the EPA. https://t.co/DEOXO4nlbr

“We’re reviewing the situation. When we have had the chance to have a deeper dive on it we’ll let you know the outcomes of that,” she added. “But we’re currently reviewing that here at the White House.”

Following the latest ethics controversies, a number of Washington lawmakers are calling for Pruitt to resign or be fired, including two Republicans, Rep.
Carlos Curbelo (R-Fla.) and Rep. Ileana Ros-Lehtinen (R-Fla.).