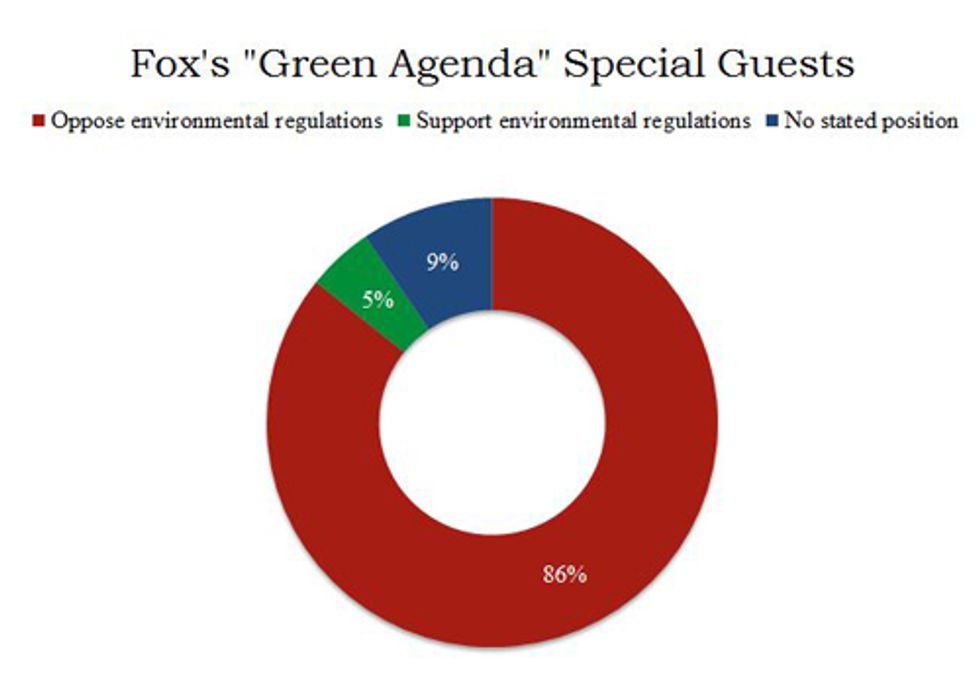 A Fox News special on President Obama's "green agenda" presented a one-sided discussion of Environmental Protection Agency (EPA) rules that distorted the intention and impact of regulations, downplayed the threat of climate change and ignored the public health threats of coal use.

Fox's hour-long special painted a one-sided picture of environmental regulations, featuring 18 critics and only one supporter of EPA clean air and water rules. Fox interviewed three Republican politicians, an industry executive, a radio host and five coal miners, but not a single scientist, Democratic member of Congress or environmental group to discuss the threats of air pollution and global warming.

Fox focused the first segment of its special on former regional EPA administrator Al Armendariz, who resigned after a political firestorm erupted over an analogy he made in 2010 comparing his environmental enforcement strategy to Roman crucifixion. Although he clearly stated that he was referring only to companies that were "not compliant with the law," Fox once again took his comments out of context to suggest that the EPA targets oil and gas companies unnecessarily.

While Fox suggested that Armendariz's comments revealed the EPA's "radical" intentions, many in the industry have praised the EPA under the Obama administration for its restraint and recognized that the agency is legally required to implement many overdue rules.

Fox Questions Whether Climate Change Is "A Real Problem"

In a segment on the EPA's supposed "mission creep," the host of the special, Bret Baier, questioned whether global warming is a "real problem":

[A]n all-out effort to lower the temperature of the planet, assuming global warming is a real problem that humans can reverse, would surely be the most complicated and expensive undertaking in human history.

He went on to quote people with no scientific expertise to cast doubt on the threat of climate change. Radio host Mark Levin denied that carbon dioxide is a pollutant that should be regulated, saying: "Carbon dioxide is what we exhale. Carbon dioxide is necessary for plants." Coal miner Buz Hilberry later echoed this, saying: "I'm no scientist but CO's what make plant grows and what make you breathe, so they're trying to choke us all out by stopping the burning of coal."

But Fox did not consult a single climate scientist, the vast majority of which agree that human activity is changing our climate.

Fox devoted a large portion of its special to the impact of EPA rules on coal miners. But while it linked the EPA regulations to efforts to combat global warming, it failed to mention that the majority of the regulations are actually designed to limit the health risks from coal. In a 2011 summary report commissioned by the American Lung Association, scientists concluded that "hazardous air pollutants emitted to the atmosphere by coal-fired power plants cause a wide range of adverse health effects including damage to eyes, skin, and breathing passages; negative effects on the kidneys, lungs, and nervous system; increasing the risk of cancer; impairment of neurological function and ability to learn; and pulmonary and cardiovascular disease." And according to the American Academy of Pediatrics, children are "disproportionally impacted by air pollution."

Fox also failed to mention that competition with cheap natural gas is one of the primary reasons that coal generation is declining.