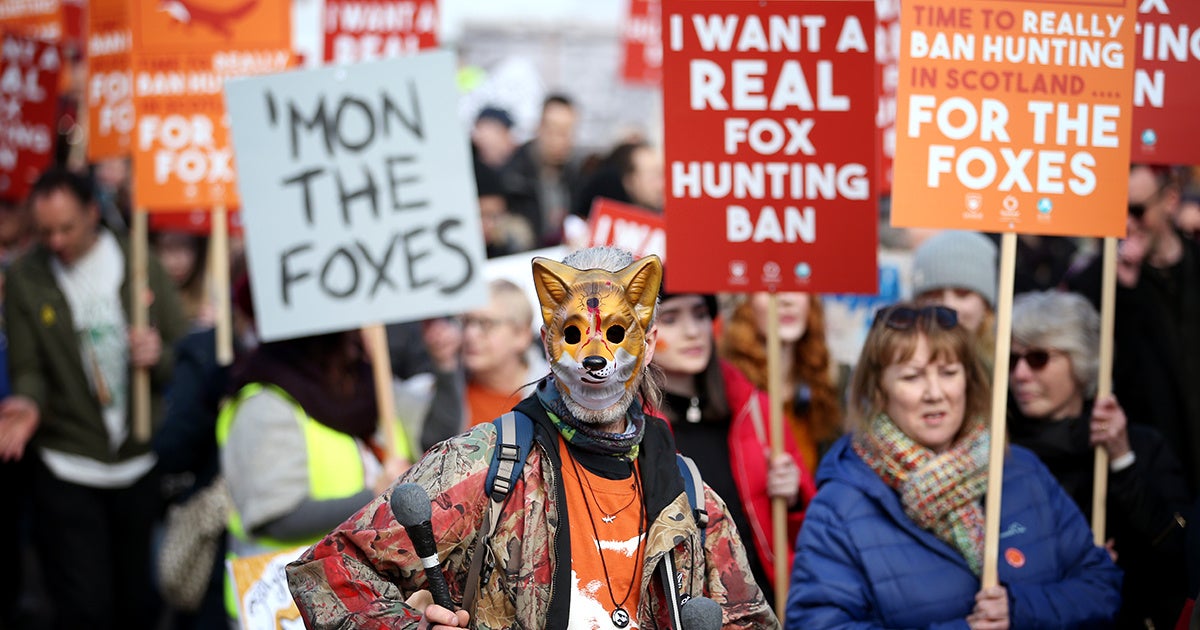 A controversial tradition persisted in England and Wales this Boxing Day as around 250,000 people gathered for annual fox hunts around the country, BBC News reported.

Traditional fox hunting, in which hounds both chase and kill a fox, was banned in England and Wales 2004, but hunting groups replaced it with a practice called “trail hunting,” in which the dogs follow a pre-set trail of animal urine. Now, animal rights groups say this revised practice can still lead to the death of foxes if the trail is set close to fox habitat. Charities said there had been dozens of reports just this year of foxes being chased and killed since the hunting season started in November, The Guardian reported.


What is trail hunting?

“Wild animals – including foxes, hare and deer – are still being chased to exhaustion across the British countryside before being torn to pieces by packs of trained hunting hounds,” League Against Cruel Sports Deputy Director of Campaigns Chris Pitt told The Guardian. “With over 85% of people opposing all forms of hunting with hounds, there is strong support for British wildlife being given robust protection from those who kill for sport. How can we call ourselves a civilised nation when those who gain entertainment from attacking wildlife continue to go unpunished by the law?”

Responding to claims like these, shadow environment secretary Sue Hayman of the Labour Party said her party would consider toughening up the 2004 Hunting Act if it gained power. New measures could include jail sentences for illegal hunting that are equivalent to the penalties for other wildlife crimes. Another could be the addition of a “recklessness” clause to prevent trail hunts being used as a cover for animal killing, ITV News reported.

“Labour’s 2004 Hunting Act was a key milestone in banning this cruel blood sport, but since then new practices have developed to exploit loopholes in the legislation,” Hayman said.

Labour is calling time on those who continue to defy the law on illegal fox hunting.

Our proposals today form part of the next chapter in striving to ensure our laws and regulations on animal welfare are up to date and fit for purpose.https://t.co/NIeZhjJ7Dm

The direct action group Hunt Saboteurs that works to disrupt hunts posted a picture on Twitter of at least one fox killed this Boxing Day, whose body the group had recovered. They reported that clashes at two hunts between saboteurs and hunt supporters had led to saboteurs being injured. At a hunt in East Kent, one hunt supporter was arrested after landing a saboteur in the hospital with a potential broken eye socket, the group said in a press release.

Hunt supporters and counter-protesters also clashed in Bassaleg, Wales. At one point, noise from the confrontation spooked a horse, who backed up into the crowd, The South Wales Argus reported.

“I have been coming here every year to show I am against the traditional hunt,” teacher Ruth Griffiths told The South Wales Argus. “It was shocking to see one of the huntsman lose control of a horse – it ended up going into a crowd of people – which was quite scary.”

“The Labour Party continues to focus on a narrow animal rights agenda, rather than issues that really matter to rural people,” he said.

However, a recent poll from the League Against Cruel Sports found that only one-sixth of 1,072 rural residents surveyed thought the sport reflected country values. The survey also indicated that animal-friendly activities like wildlife watching and hiking were more popular with country dwellers.

New polling shows exactly how popular hunting is among people in the countryside… pic.twitter.com/VdUZAGDVw1

In Scotland, meanwhile, where fox hunting has been banned since 2002, politicians are also calling for tighter controls.

“The so-called ban has failed and urgent action is needed to close the loopholes that allow foxes to be chased and even killed by hunts,” Green Party Member of Scottish Parliament Alison Johnstone said, BBC News reported.