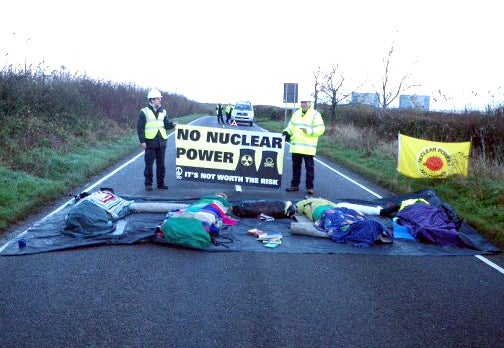 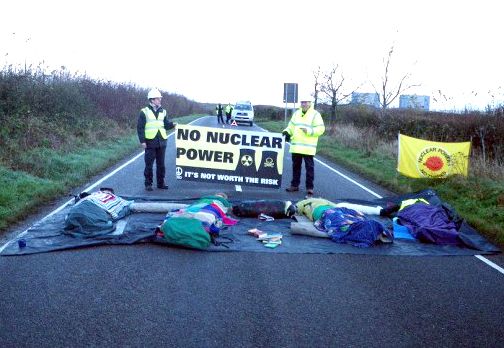 Protestors block the road leading into Hinkley Point in the UK where a proposed nuclear power station is to be built. Photo credit: Stop New Nuclear

This morning, as the energy bill was making headlines in the UK, 10 people were setting up a non-violent blockade protesting the proposed Hinkley Point nuclear power station. It’s a sure sign that building new reactors will be an uphill struggle.

The first new nuclear power station in the UK for decades is supposed to be built in Hinkley Point, on the West Somerset coast. As often happens when you’re dealing with the nuclear industry, plans have gone somewhat awry.

Local people are furious, because they don’t believe the government or EDF, who want to build the reactor, are listening to them.

Some are worried about hundreds of lorries trundling past their front door. Others worry about the nuclear waste that would be stored on-site for decades. Many would just rather the money being spent propping up the nuclear industry were spent on affordable, sustainable renewable power.

The protest today finished when four people were arrested, but it’s unlikely to be the last protest of this nature. It’s hard enough building a nuclear reactor on time and on budget—and it’s much, much harder when local people are determined to stop you.