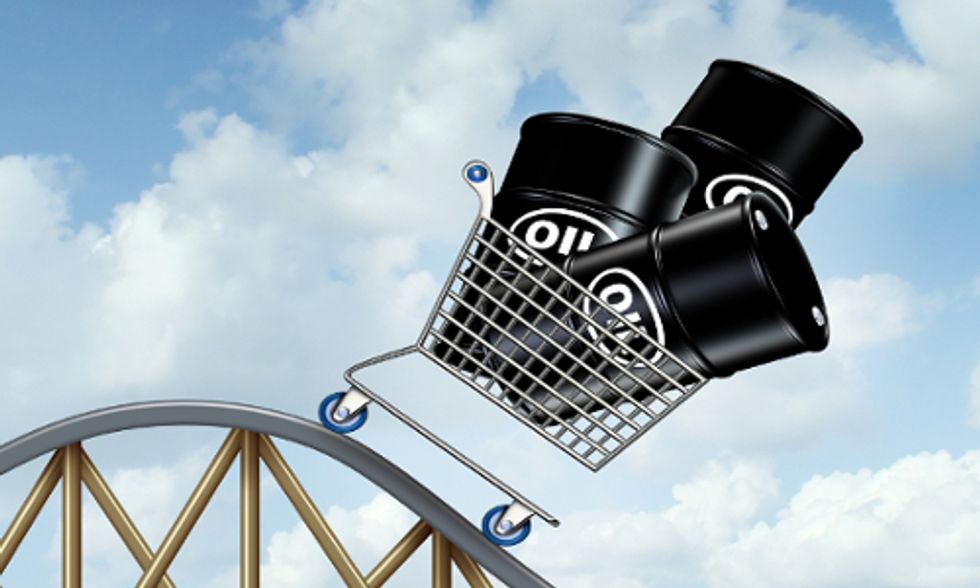 The price of a barrel of oil has been dropping steadily due to decreasing demand and a glut of oil on the market, thanks in large part to the fracking boom in the U.S. Last week, the Organization of the Petroleum Exporting Countries (OPEC), led by Saudi Arabia, announced it wasn't going to cut back on production. The announcement sent prices down to less than $70 a barrel, creating financial worries for some banks and a billionaire whose wealth depends upon the success of fracking.

Billionaire oilman Harold Hamm, referred to by Bloomberg as "the founding father of the U.S. shale boom" who helped drive the discovery and development of North Dakota's oil-heavy Bakken shale formation, lost half his fortune in the last three months, the publication reports.

"Will this industry slow down? Certainly,” Hamm told Bloomberg. “Nobody’s going to go out there and drill areas, exploration areas and other areas, at a loss. They’ll pull back and won’t drill it until the price recovers. That’s the way it ought to be. This is a bump in the road, a correction, an adjustment that we’re going through right now."

Oil prices of more than $100 a barrel were a large driver of fracking exploration. But as prices drop, fracking for oil in areas such as the Bakken could become unprofitable. But Hamm believes the price will rebound. He claims that his company, Oklahoma-based Continental Resources, can make a profit at $50 a barrel and plans to boost output next year. "Hamm declined to say how those plans may change if prices fall further," Bloomberg reported, adding "In the most profitable areas of the Bakken, producers can turn a profit on average with oil prices above $65.03 a barrel, according to Bloomberg New Energy Finance."

You might want to hold those tears for Hamm, who was Mitt Romney's energy advisor when he ran for president in 2012. Half his net worth still amounts to about $10 billion dollars.

But Hamm isn't the only one getting edgy about declining oil prices. The oil and gas industry sold Americans a rosy portrait of energy independence thanks to fracking, and some banks, buying into this picture, exposed themselves to risk from dropping prices.

“A huge chunk of the shale oil boom can be traced back to Wall Street, where years of low interest rates have encouraged energy companies to fuel their growth by tapping eager investors in the bond and loan markets,” reports The Financial Times in an article headlined "U.S. Shale Lenders Caught in Energy Sell-Off." "Massive investment by oil drillers and exploration companies in U.S. energy and shale gas projects in recent years has been partly financed through cheap borrowing in the capital markets as well as loans from banks."

The publication reported that share prices of banks in shale oil areas nosedived in the wake of OPEC's decision and the subsequent price decline, with drops of as much as 7.45 percent. It suggested that continued price decline could trigger a wave of debt restructuring or losses on the banks' energy-related loan portfolios.

"Cheaper fuel prices are a good thing for the global economy, but oil’s decline has been so fast and so unexpected that it’s caught many in the energy industry by surprise," he wrote. "Companies already are paring capital budgets and some are slowing plans for new drilling. That’s already hurting oil field service providers and offshore rig operators, who will bear the brunt of the decline."

"Will the rejuvenated U.S. Oil Patch fall victim to its own success?" he asked. "A prolonged weakness in crude prices, of course, could take a toll. Companies with too much debt or too many expensive drilling projects are likely to be in trouble. Look for more consolidation among smaller producer in particular. And financing may dry up if prices continue to decline."

And despite his relentlessly optimistic outlook abut the future of fracking and domestic oil production, Hamm told Steffy that Continental wouldn't be adding any new rigs in the Bakken in 2015.

"The company had announced plans in late September to increase capital spending to $5.2 billion from $4.6 billion this year, but Hamm said it now intends to keep its spending flat, essentially cutting its capital budget by $600 million," Steffy wrote.

With its much lower oil production costs, Saudi Arabia has the upper hand in this international game of chicken.

"U.S. producers, having pushed output to its highest in three decades, find themselves facing the paradox of achieving energy independence: the more oil they produce, the harder it becomes to reduce imports," said Steffy. "That’s because as oil prices fall, expensive hydraulic fracturing projects become unprofitable, tipping the scales in favor of cheaper imports."