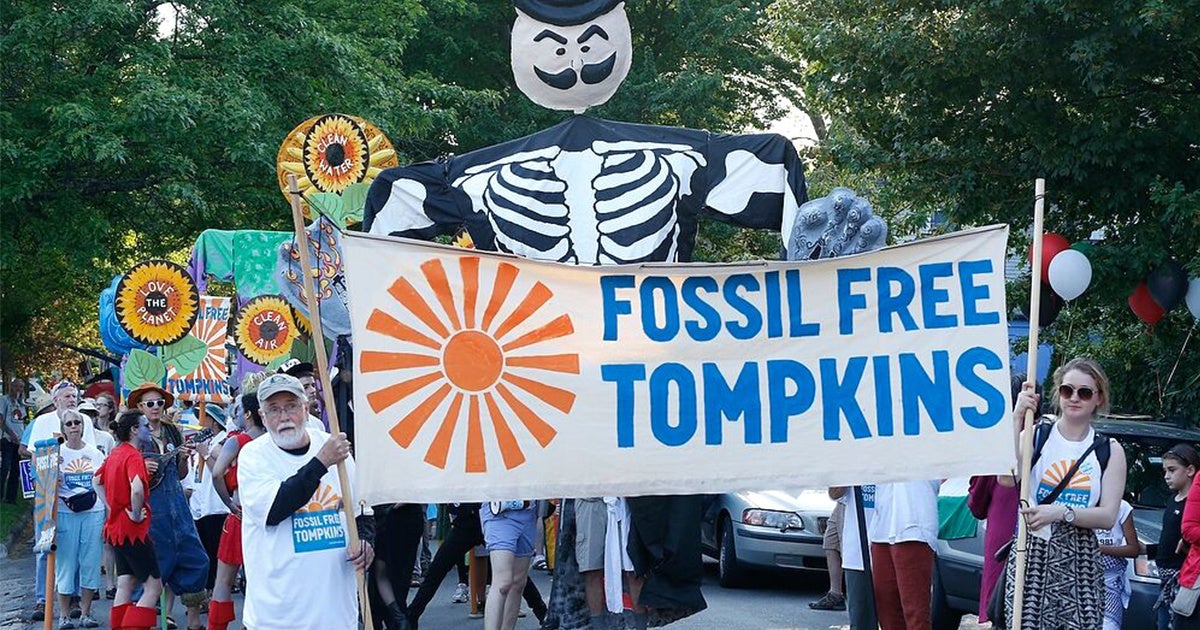 Lisa Marshall isn’t your typical activist. For one thing, she’s not into crowds. “I don’t really like rallies,” Marshall, a mom of three from upstate New York, said. “They’re a little stressful — not my favorite thing.”

Marshall, who has two degrees in earth science, remembers being concerned about fossil fuels when New York activists began to push Governor Cuomo to ban fracking in the early 2010s. But she didn’t know the best way to become involved. “At that time, one of the main strategies, which was very effective in New York, was to just show up wherever [Cuomo] was and make sure he had no peace from the activist community until he banned fracking,” she said. “It just was very overwhelming.”

Then, at one of her first organizing events for the activist group Mothers Out Front, Marshall realized that organizing wasn’t just about making noise. “They handed out a form, with what we might be interested in doing [to help],” she said. “The form said, ‘Are you interested in research?’ I don’t want to go to a rally, but research? Sign me up.”

The Finger Lakes area of New York, where Marshall lives, has been a key hotspot for the state’s anti-fracking movement for years. Local activists were part of an important coalition to convince Cuomo to ban fracking in 2014. Now, as New York state signs its own Green New Deal and sets one of the most aggressive emissions reductions targets in the world, newer local activists are joining with the older guard and further turning the tide on fossil fuels.

Most notably, in Tompkins County, a coalition including Mothers Out Front recently scored a big clean-power win. In May, owners of the coal-fired Cayuga Power Plant, nestled on the shores of Cayuga Lake just north of Ithaca, announced that instead of switching to gas-fired power, the plant will become a data center partially powered by an on-site solar field. The rest of the electricity will come from other power sources. The power plant’s owners have asked for an all-renewable allocation from regulators but that decision hasn’t been announced yet. At the very least, the shift marks a transition for the location from dirty power producer to clean(er) power user.

Just three years ago, the plant was at a crossroads. The longtime owner of the plant had filed for bankruptcy in 2011, as low natural gas prices began to push up the cost of coal. The state decided to help the plant hobble along on subsidies, which cost taxpayers million per month. And as coal’s fate began to decline, the taxable value of the power plant also took a turn for the worse, losing 0 million in value between 2009 and 2014.

In 2016, the plant faced even more hurdles. In February of that year, state regulators denied an application from the owners for more subsidies to power the plant with coal and natural gas, deciding to spend the money requested on transmission upgrades that would achieve the same reliability for ratepayers without adding more fossil fuels to the mix.

But the lure of natural gas was too great. Last May, the plant’s new owner, Beowulf Energy, filed another application with state regulators to switch the plant to primarily run on natural gas. Beowulf Managing Director Michael Enright told the Lansing Star that the company thought the switch would save jobs and help the town’s tax base.

“I called it a really bad summer sequel,” said Irene Weiser, a longtime fracking activist in the region. Weiser, coordinator of the group Fossil Free Tompkins, and other activists had been instrumental in pushing for the transmission upgrades in 2016 and against transitioning the plant to natural gas. “We were having to fight this all over again.”

This time around, seasoned activists weren’t alone. Since the protests at Standing Rock that fixated the country in 2016, more and more communities across the country have become involved in opposing local gas pipelines and power plants.

“I think there’s just been a growing consciousness over the years that we needed to get further away from fossils, including gas,” Weiser said.

While helping her daughter research famed environmentalist Rachel Carson for a high school project last year, Marshall connected with Sandra Steingraber, a noted environmental activist in the area. After speaking with Marshall’s daughter for the project, Steingraber told Marshall about several local oil and gas projects that could use additional organizing for opposition — and Marshall decided to tell her “mom network” about the Cayuga project.

The fresh energy from Mothers Out Front helped galvanize new voices to speak about the project to the Tompkins County Legislature. “[The legislature] even said, ‘We’re seeing all these people we’ve never seen at any meeting before,'” Marshall said. “People were getting up, our people that we mobilized, and saying, ‘I’ve never come to the county legislature before. I would rather do almost anything other than stand here, but I’m really concerned about this.'” In November of last year, the legislature sent a letter to Albany officially opposing the Cayuga plant’s proposal to transition to gas.

The activists’ argument was also helped by changing market forces. Natural gas enjoyed a streak of no-questions-asked years in the early 2010s, as rock-bottom prices and the boom in fracking made gas the No. 1 choice for power suppliers. But the crashing price of renewables and fast technological innovations in storage have made many analysts and utility companies look towards a fossil fuel-free future.

The looming targets of the Paris agreement, which seeks to limit global temperature increases to no more than 1.5 degrees C, set additional constraints on natural gas. That’s because while natural gas emits less carbon than coal, climate and energy experts note that methane emissions from fracking and burning natural gas make it much harder to meet the targets in the short-term. Locking in more natural gas infrastructure, activists say, delays the adoption of renewable energy and would impede the international targets — as well as New York state’s new emissions goals.

Ed LaVigne was elected as Lansing town supervisor in 2012, and says his priority is helping the town maintain its tax revenues and its jobs — which means helping businesses like Beowulf stay in Lansing. “As I tell [the company], I say, ‘We’re the barnacle,'” he said. “‘You’re the whale. You’re going to take us places we can’t go by ourselves.'”

But for LaVigne, the company’s decision to look to future technologies makes sense. “When I went to pharmacy school in the late ’70s, it cost you 0 and a nine-volt battery to have a calculator that adds, subtracts, multiplies and divides,” he said. “You now can get them to run off of indoor light and they’re free when you open up a checking account. That’s how these dynamics have changed. So let’s just put the adult pants on and fast forward to see how we can develop these systems.”

Regardless of the temporary victory for anti-fracking activists, challenges remain for the project. Data centers are notorious energy sucks: the one planned on the Cayuga site cannot get all of its energy from the solar panels it will install, and it has asked New York regulators for a substantial allocation of clean energy to power the facility. If Beowulf does not get this energy allocation, it will switch back to its plan of powering the plant with gas. And locals are concerned about whether the data center will retrain current plant workers to help them keep their jobs.

“I don’t count my chickens before they’re hatched,” Weiser, the anti-fracking activist, said of the plan. She pointed out that the data center’s energy allocation ask is larger than any other facility in the state. “That said, it’s an interesting new development.”

Marshall is cautiously optimistic — but also heartened — about the power of organizing to transform local politics. “If you mobilize, if you organize and build power and then mobilize that power strategically, that’s how all of the important things usually happen.”