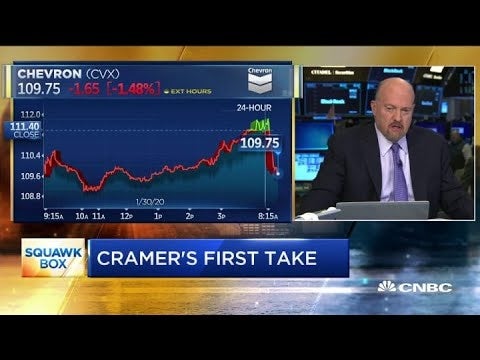 Cramer added that “the world’s turned on” the industry as they did with tobacco.

“The world’s changed,” Cramer continued. While companies like BP still mark profits, “nobody cares,” because “new money managers want to appease younger people who believe that you can’t ever make a fossil fuel company sustainable.”

“You can tell that the world’s turned on them, and it’s actually kind of happening very quickly,” said Cramer. “You’re seeing divestiture by a lot of different funds. It’s going to be a parade … that says look, ‘These are tobacco, and we’re not going to own them.'”

Oil stocks are in the death knell phase, says @jimcramer. "The world is turning on them…new kinds of money managers who frankly want to appease younger people who believe you can't ever make a fossil fuel company sustainable." pic.twitter.com/PV63RSudrf

Watch this entire thing: it doesn't matter how well oil stocks are doing, the next generation sees them as toxic and doesn't want them. Everyone involved in the fossil fuel divestment movement, and that is thousands upon thousands of mostly young people, made this happen. Wow. https://t.co/cDaD9VjBD2

350.org founder and author Bill McKibben had a similar takeaway, writing on Twitter Friday, “Thanks to all who fight so hard.”

We're glad to see @JimCramer calling out fossil fuel companies as bad investments. Another good reason to ditch: they happen to be destabilizing the climate 🔥 https://t.co/k6KZn3C6ih

Cramer’s comments on “Squawk Box” came two days after he tweeted that he was “taking a hard pass on anything fossil” — a comment welcomed by Sierra Club executive director Michael Brune.

Lindsay Meiman, a spokesperson for 350.org — which has spearheaded the global movement to demand pension funds, university endowments, and other institutions divest from oil, coal and gas companies — said Cramer is only confirming what many market observers already understand.

“The financial tides are turning away from fossil fuels. Coal, oil and gas companies are not only the perpetrators of the climate crisis we’re now experiencing, but have also dangerously underperformed markets over the last decade,” Meiman told Common Dreams. “As we enter the climate decade, we’re demanding polluters pay for their destruction, and that all institutions and politicians cut ties from toxic fossil fuels to reinvest in a world that puts our health and safety first.”