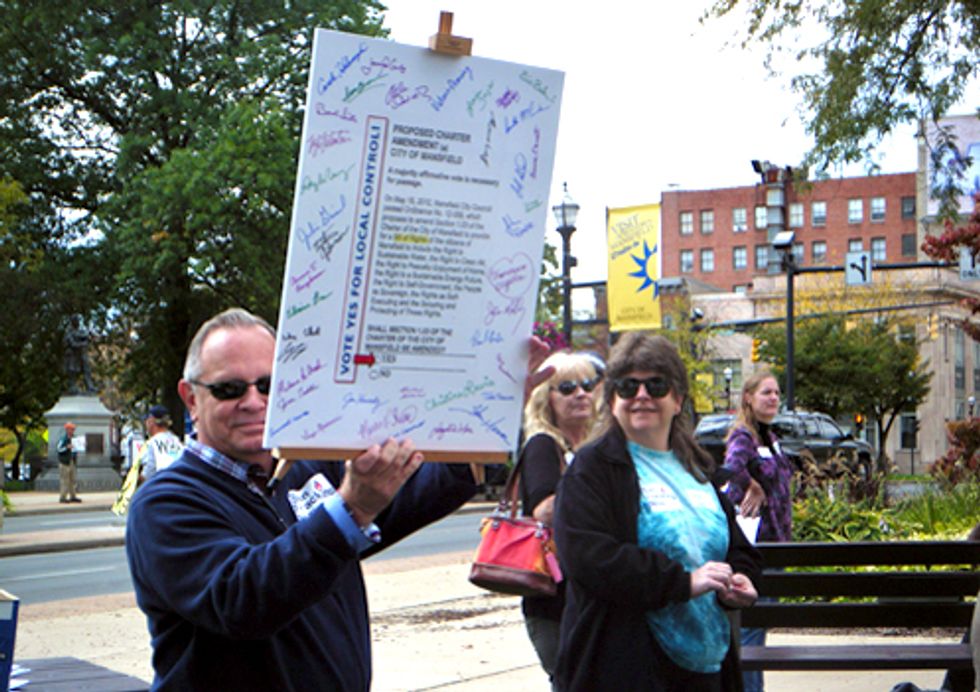 [Editor's Note: I had the chance to talk with Bill Baker, an organizer for Frack Free Ohio, who is very grateful for the DeSmogBlog investigative piece posted below. However, he wanted to provide this statement in conjunction with this post: Questions have been voiced by many Mansfield residents over the last two weeks asking, "Who are these outsiders telling us to vote against our own local charter amendment and why are they waging a million dollar campaign to suppress the choice of the local people?" The Environmental Bill of Rights drawn up by law director John Spon at the insistence of residents and with the support of the mayor and city council isn't breaking news. We've known this would be on the ballot for months and the majority of the Mansfield community is in agreement that high-pressure, high-volume toxic wastewater injection wells inside city limits and located in our industrial park would not be conducive to attracting new businesses. They would put at risk existing businesses located there due to pollution threats and earthquake risks. Mansfield residents won't be bought by false promises and phony advertising. The voice of local control and true democracy will prevail here regardless of the outcome of manipulated votes.]

John Marvar proudly displays the Bill of Rights document while Jean Taddie and other residents look on. The Bill of Rights was the focus of the Global Frackdown rally held in Mansfield on Sept. 22.

Ohio is referred to as a "battleground state" due to its status as a "swing state" in presidential elections. But another important battle is brewing in the Buckeye State, also set to be settled in the voting booth.

This battle centers around a Community Bill of Rights referendum in Mansfield, Ohio, and will be voted on in a simple "yes/no" manner. Mansfield is a city with roughly 48,000 citizens located 80 miles southwest of Cleveland and 66 miles northeast of Columbus, right in the heart of the Utica Shale basin.

Eric Belcastro, the Pennsylvania Organizer for the Community Environmental Legal Defense Fund (CELDF), explained the rationale behind the "Bill of Rights" push in a blog post:

Faced with the permitting of two 5,000 foot deep injection wells in Mansfield by the Ohio Department of Natural Resources (ODNR)...[t]he amendment would drive a community Bill of Rights into Mansfield's charter and then prohibit the injection of fracking wastewater on grounds that such prohibition is necessary to secure and protect those community rights. The amendment also recognizes corporate “rights” as subordinate to the rights of the people of Mansfield, as well as recognizing the rights of residents, natural communities and ecosystems to clean air and water.

The ODNR, in a study published in March 2012, linked the 12 earthquakes that have occured in Youngstown, Ohio to injection wells located in the city.

Though the Bill of Rights has the full support of the City Council and the Law Director, as well as the city's newspaper, the Mansfield News Journal, one faction in particular isn't such a big fan of the Bill of Rights: the oil and gas industry. In response to the upcoming referendum vote, the industry has launched an 11th hour astroturf campaign to "win hearts and minds" of those voters still on the fence as it pertains to the Bill of Rights in the week before the election.

DeSmogBlog has obtained images of flyers distributed via a well-coordinated direct mail campaign conducted by the oil and gas industry in Mansfield, made public here for the first time in an exclusive investigation.

At the metaphorical 11th hour of the Mansfield referendum campaign, literally in the week before the vote is set to take place, a new group rose out of the dust called "Mansfielders for Jobs." The group isn't traceable via LexisNexis or Factiva and has only been written about by the Mansfield News Journal on three occasions.

A group called Mansfielders for Jobs, which has not filed any campaign spending forms locally with the Richland County Board of Elections, has distributed a flyer [obtained by DeSmog] arguing the charter amendment would do nothing to improve the environment, and contains “vague wording” that would open the door for costly lawsuits that could hurt local small businesses.

Two days later, the Journal published a follow-up piece, further highlighting that Mansfielders for Jobs distributed a flyer that "lists no contact address and no campaign treasurer." That flyer obtained by DeSmog says the "Bill of Rights" will "hurt job creation in our city."

The follow-up piece offers one key hint at who the founders of the upstart "Mansfielders for Jobs" might be—it notes that Energy Citizens is another group distributing "vote no" flyers.

Energy Citizens is a front group of the American Petroleum Institute (API) and a public relations campaign dreamed up by Edelman, an outfit well-known for, among other things, working as a "merchant of doubt" on behalf of Big Tobacco. That might explain why API has also spent time and money flyering.

And then there is the API front group Energy in Depth (EID). Earthworks' Sharon Wilson, the author of the blog Texas Sharon, refers to EID as the Joe Camel of fracking, appropriate given API's Edelman ties. EID Ohio has gone on an offensive against the prospective "Bill of Rights."

"The activist organizations furthering these efforts are taking cues from out-of-state organizations that oppose the responsible development of fossil fuels at every turn," Dan Alfaro, EID Ohio's spokesman, told the Akron Beacon Journal on Sept. 8.

Roughly a month later, he told the Mansfield News Journal:

While this (charter amendment) is being marketed as a homegrown, organic movement coming from local concerned citizens, it is, in fact, a well-funded, coordinated effort being directed from a national organization opposed to the development of fossil fuels at every turn. This proposal ... promotes a well-documented agenda under the guise of a local charter.

"Clearly, Mansfield needs to be shown facts before making a decision to deter business from coming to the area," she opined. "As EID has covered before, Mansfield, Ohio is not in a position to create regulations that will hurt its chance for a better economy."

On Jan. 30, the Mansfield Tea Party Patriots hosted a forum titled, Fracking and Injection Wells What Do We Really Know?, touting the so-called "benefits" of brine injection.

The three featured speakers were David Hill, the secretary/treasurer of the Ohio Oil and Gas Association; Michael Chadsey of Energy in Depth Ohio and Rebecca Heimlich of the American Petroleum Institute. Chadsney and Heimlich spoke at a forum on the same topic in April hosted by the New American Patriots in Ashland, OH, a 20-minute drive from Mansfield.

Mansfield Tea Party Patriots and New American Patriots are both local-level branches of the national-level Tea Party Patriots, a right wing front group started by FreedomWorks in the summer of 2009, according to a September 2009 investigative report titled The Lie Machine by Rolling Stone's Tim Dickinson.

After FreedomWorks orchestrated the original Tea Party protests last April, it ostensibly handed over the reins of the movement to a third group, called the Tea Party Patriots. But internal correspondence from the group's private listserv obtained by Rolling Stone makes clear that FreedomWorks is still calling the shots.

An offshoot of Citizens for a Sound Economy, FreedomWorks is the sister of another offshoot, Americans for Prosperity (AFP). What was once known as Citizens for a Sound Economy was heavily funded by the Koch Brothers and today AFP is still funded by the Kochs. Frank Rich, former columnist for The New York Times wrote that "FreedomWorks received $12 million of its own from Koch family foundations" in an August 2010 article.

It's unsurprising then, that before her current stint at API, Heimlich served as AFP's Ohio Director from December 2009-November 2011.

When asked in an interview with DeSmogBlog where the idea and money for "Mansfielders for Jobs" originated from and whether or not it was an actual grassroots organization, Walter would not comment, only stating, "I don't know the exact date [of origin of the group], but my husband and I just feel strongly that this is bad legislation."

Walter gave $6,025 to Republican Gov. John Kasich in the run-up to his 2010 electoral victory, according to the National Institute on Money in State Politics' campaign finance database. Kasich, a formative member of the American Legislative Exchange Council (ALEC) and former Fox News show host, received more than $332,000 from the oil and gas industry during his 2010 race.

This isn't the first time the oil and gas industry has deployed its astroturf battalion to fight back against a local ordinance at the 11th hour.

One year ago, Consumer Energy Alliance (CEA) waged an astroturf campaign to defeat the hotly contested fracking ban ordinance in Peters Township, PA. CEA—an oil and gas industry front group—came out on the winning side of this one, a testimony to the effectiveness of its slick public relations campaigns.

The Pittsburgh Post-Gazette summarized the situation in Peters Township a November 2011 story:

Right up to Election Day, Peters residents were receiving sleek fliers in the mail encouraging them to vote against a referendum to ban gas drilling in the Washington County community.

CEA's 2012 annual report lists the 2012 victory in Peters Township as one of its chief accomplishments.

The stakes are higher than most would imagine in Mansfield.

ProPublica's Abrahm Lustgarten pointed out in a June 2012 investigation titled, Injection Wells: The Poison Beneath Us, that injection wells are a public health hazard in-the-making of epic proportions that hardly anyone is talking about. There are a staggering 150,000 injection wells in 33 states and 10 trillion gallons of toxic fluid have been dumped in them, according to ProPublica.

"In 10 to 100 years we are going to find out that most of our groundwater is polluted," Mario Salazar, an engineer who worked for 25 years at the Environmental Protection Agency's underground injection program told ProPublica. "A lot of people are going to get sick, and a lot of people may die."

The battle in Mansfield—literally one of life and death—is on between corporate profits and scientific integrity.

Local citizens run an ad in the local paper inviting other residents to join in signing the Bill of Rights. Reminiscent of the Declaration of Independence, it is a reminder that our voices count!