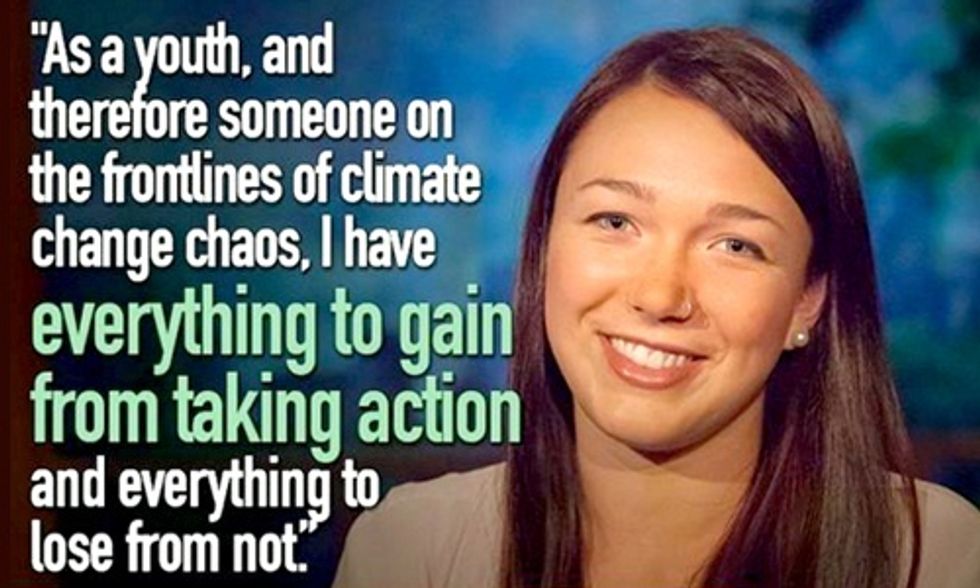 U.S. Magistrate Judge Thomas M. Coffin is scheduled to hear oral arguments Wednesday from the U.S. government and the fossil fuel industry on their motions to dismiss a landmark constitutional climate change lawsuit.

The case has been brought before the court by 21 youth plaintiffs as well as climate scientist Dr. James Hansen, as guardian for future generations as well as his granddaughter and youth plaintiff Sophie. The youth's complaint itself is 95 pages, but boils down to a simple demand that the federal government cease conduct that promotes fossil fuel extraction and consumption, and instead develop and implement an actual science-based climate recovery plan. The complaint argues the youth have a fundamental constitutional right to be free from the government's destruction of their Earth's atmosphere.

The Department of Justice represents the U.S. government (using taxpayer dollars), while Sidley Austin LLP, a law firm with 1,900 lawyers, represents the fossil fuel industry. The latter's motion to intervene was granted by Judge Coffin in January.

In true David and Goliath form, the youth and Dr. Hansen will be represented by legal counsel coordinated and led by the small Oregon non-profit Our Children's Trust. The youth have received additional legal support through an amicus brief on behalf of the Global Catholic Climate Movement, representing 250 Catholic organizations and thousands of individuals, and the Leadership Council of Women Religious, representing more than 40,000 women religious. Additional amicus briefs supporting the youth have been filed by constitutional scholar John E. Davidson, former senior scientist and executive director of the defendant's Office of the U.S. Global Change Research Program Dr. Michael MacCracken, and Hansen himself, in his capacity as an climate expert.

But the legal support behind the youth is only the tip of the iceberg. They are also expecting moral support from hundreds of supporters, mostly students, traveling to Eugene, Oregon, for the hearing Wednesday. One group that has been instrumental in organizing the community support has been 350 Eugene, a group founded by environmentalist, author and journalist Bill McKibben.

“Students are both scared about the climate crisis and inspired by seeing other kids—especially plaintiffs they know from school or local clubs—take an action as bold as suing the government," Mary DeMocker, 350 Eugene's co-founder and creative director, said. "They are fascinated and want to march with them at our rallies and hear them speak in court, because they know plaintiffs amplify their own love—for animals, for the earth, for fairness—and their fear that their world is being destroyed by the adult recklessness."

The court's shorthand for the case, Juliana v. United States, refers to the now 19-year-old youth plaintiff listed first in the complaint, Kelsey Juliana. Here's a statement Juliana released on her Facebook wall:

“Our arguments are simple: We demand that the government we elected to represent its people act on the interests of the land and citizens instead of the interests of corporate industry. We, as youth, demand that our constitutional rights to life, liberty and property are upheld by the government and that they act to advert climate catastrophe by reducing carbon emissions and fazing out support of fossil fuels. We are youth fighting for our futures in court, securing fundamental rights for present and future generations. JOIN US! FOSTER THE MOVEMENT! 3/9/2016, 10am, Federal District Courthouse in Eugene, OR!"

In preparation for the expected attendance and interest in the case, the District Court plans to livestream the oral arguments into three overflow courtrooms in the same courthouse, as well as Courtroom 12A in Portland's Mark O. Hatfield United States Courthouse.