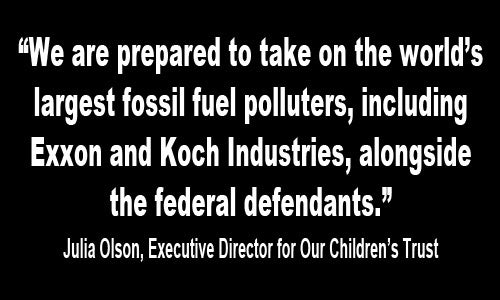 Magistrate Judge Thomas Coffin of the federal District Court in Oregon granted defendant status Wednesday to three trade associations, representing nearly all of the world’s largest fossil fuel companies. The three associations had moved to intervene in the constitutional climate change lawsuit brought by 21 young people from around the country. 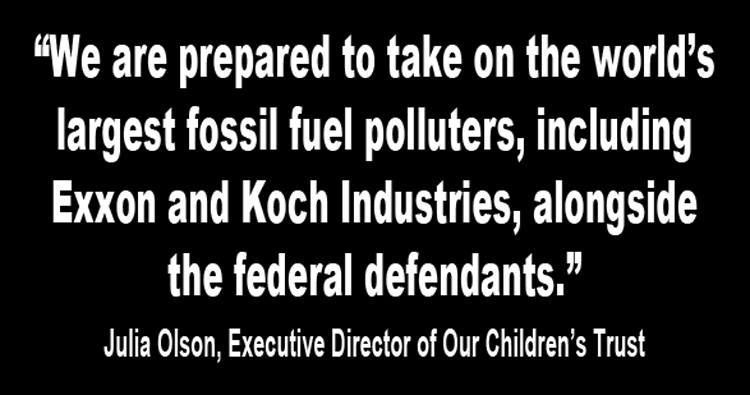 The fossil fuel powerhouses call the youth’s case “extraordinary” and “a direct, substantial threat to [their] businesses.” During Wednesday’s hearing, the industry argued that a decision in favor of plaintiffs on their legal claims will require a significant restructuring of the fossil fuel business model, such as potentially invalidating thousands of leases for fossil fuel extraction and development.

“A finding of liability will necessarily lead to a remedy that will necessarily impact” the trade association members, said Quin Sorenson of Sidley Austin, counsel for AFPM, API and NAM. Sorenson went on to argue that if the federal defendants are found liable for constitutional or public trust violations, that finding would in essence be a finding that the U.S. had acted unlawfully in permitting the fossil fuel activities of the associations’ member companies.

Judge Coffin agreed that a decision in the plaintiffs’ favor would impact the interests of the fossil fuel intervenors. As a result, Judge Coffin wants to have the key interested parties in the courtroom should the case proceed to trial. Counsel for the trade associations confirmed the groups represent nearly every fossil fuel related company in America. In response to the court’s questioning, the three trade associations stated they would all speak with “one unified voice” during the litigation.

“We are prepared to take on the world’s largest fossil fuel polluters, including Exxon and Koch Industries, alongside the federal defendants,” Julia Olson, executive director for Our Children’s Trust and counsel in the litigation, said.

“This case asks the court to order what the industry fears most: a national plan using the best science to leave a nation of clean air and a healthy climate to our kids. These trade groups will now have to face the science-based evidence in a courtroom, not in the halls of Congress where their lobbying dollars hold the most clout. We are confident these young people and our team of internationally-recognized scientists will present evidence supporting a court-ordered national climate plan.”

In their lawsuit, the young plaintiffs assert the federal government violated their constitutional rights to life, liberty and property by allowing and facilitating the exploitation of fossil fuels. The youth have asked the court to order the federal government to prepare and implement a science-based national climate recovery plan.

The judge granted the intervenors the opportunity to supplement the government’s Motion to Dismiss, gave the youth plaintiffs ample time to respond and has set oral argument on all Motions to Dismiss for March 9 at 10 a.m. PT in Eugene, Oregon.

Watch this video to learn more about the plaintiffs: