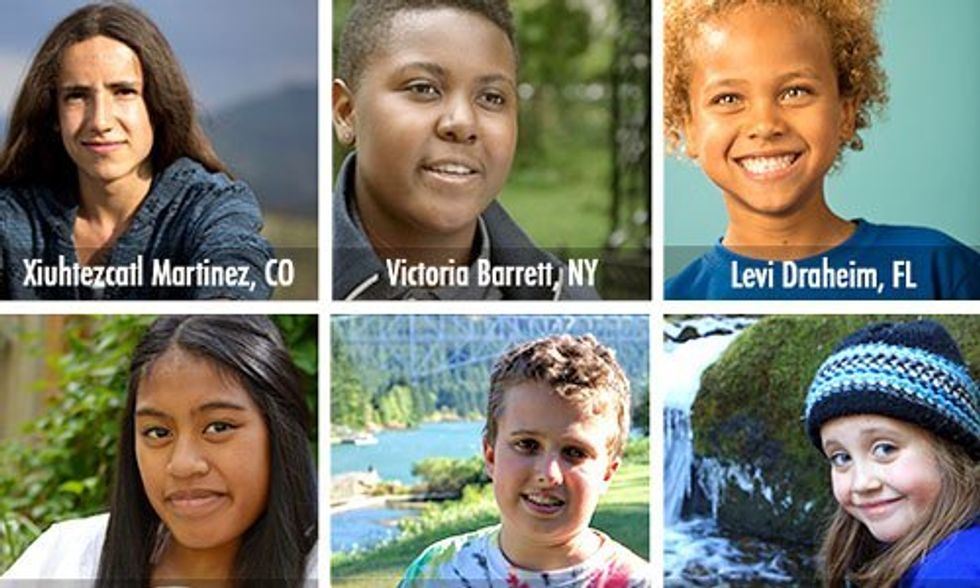 They can't even vote yet, but a significant climate change lawsuit filed against the Federal Government by young people from around the country just got the attention of the powerful fossil fuel industry.

Yesterday, nearly every oil and gas company in the world asked for permission to oppose the landmark climate lawsuit brought against President Obama and the federal government by America’s youth and Dr. James E. Hansen—as guardian for future generations. In an unusual step, the immense fossil fuel industry trade groups all filed pleadings in the U.S. District Court for the District of Oregon seeking to join the lawsuit side by side with President Obama to protect their companies’ interests.

Nine of the 21 young people from across the U.S. that have filed a landmark constitutional climate change lawsuit against the federal government in the U.S. District Court for the District of Oregon. Photo credit: Our Children's Trust

“The largest, best funded fossil fuel heavyweights want the court to protect their wallets over ensuring a habitable country for these young plaintiffs and future generations,” commented Philip Gregory of Cotchett, Pitre & McCarthy, counsel to the plaintiffs.  “As the recent disclosures by Exxon reveal, our government and the fossil fuel industry have known for decades that fossil fuel extraction, production and consumption would destroy our climate in the upcoming decades. That is why this case is significant: a court needs to order our government to protect our kids and future generations.”

The lawsuit asserts the federal government has violated the youngest generation’s constitutional rights to life, liberty and property. It also claims the government failed to protect essential public trust resources by facilitating the exploitation of fossil fuels. The youth have asked the courts to order the federal government to prepare and implement a science-based national climate recovery plan.

The fossil fuel powerhouses call the youth’s case “extraordinary” and “a direct threat to [their] businesses.” They claim “significant reduction in [greenhouse gas] emissions would cause a significant negative effect on [their] members by constraining the sale of the product they have specialized in developing and selling.”

“The biggest fossil fuel polluters on the planet, including Exxon and Koch Industries, just asked the court for permission to argue that young people don’t have a constitutional right to life if it means reducing fossil fuel use,” said Julia Olson, executive director for Our Children’s Trust and lead counsel on the litigation. “With the president on his way to the UN Climate Talks in Paris later this month, a renewed alignment between our government and the fossil fuel industry could not be less welcome. This case asks the court to order what the industry fears most: a national plan using the best science we’ve got to try to leave clean air and a healthy climate to our kids.”

In seeking to join the case, the fossil fuel Industry argues that the court should focus on short-term economic benefits over a stable climate. The industry claims that “reducing greenhouse gas emissions in order to bring atmospheric carbon dioxide levels down to 350 parts per million would abate some of the future risks of climate change, those reductions would nevertheless not be ‘appropriate’ if the future potential benefits would be outweighed by, for instance, enormous losses in productivity and economic development.”

The groups claim the fossil fuel companies “possess legally protectable interests in their members’ economic interests and legal rights in current and future contracts and transactions.” The trade groups assert the youth’s constitutional rights to breathe clean air do not trump the industry’s “concrete interests in the production, refining, and use of conventional fuels in the United States, as well as in stable and competitive energy prices.”

These young plaintiffs are challenging the federal government’s national fossil fuel programs, as well as the 1992 Energy Policy Act and the export permit for the proposed Jordan Cove LNG export terminal in Coos Bay, Oregon. Plaintiffs seek to hold President Obama and various federal agencies responsible for continued fossil fuel exploitation. Plaintiffs seek a court order requiring the president to immediately implement a national plan to decrease atmospheric concentrations of carbon dioxide to a safe level: 350 ppm by the year 2100. This case places indisputable climate science squarely in front of the federal judiciary, requesting an order that our government cease jeopardizing the climate system to the detriment of present and future generations.

“Big Oil is starting to lose control of our political system,” declared Alex Loznak, a youth plaintiff in the case from Oregon. “Last week, President Obama rejected the Keystone XL pipeline, and New York State began to investigate Exxon's cover-up of climate science. The intervention of fossil fuel companies in our lawsuit against the federal government makes it clear that the industry is scared. As Mahatma Gandhi once said, 'First they ignore you, then they laugh at you, then they fight you, then you win.' The fight has begun, and we will win.”

“Seeing giant fossil fuel corporations inject themselves into this case, which is about our future, really demonstrates the problem we are trying to fix,” stated Xiuhtezcatl Tonatiuh Martinez of Earth Guardians, a youth plaintiff in the case from Colorado. “The Federal government has been making decisions in the best interest of multinational corporations and their profits, but not in the best interest of my generation and those to come. Instead of changing their business model to meet the scientific reality of climate change, these companies are demanding we adapt to an uninhabitable world that supports their profits. When you compare the two, I think it’s clear that our right to clean air and a healthy atmosphere, is more important than their “need” to make money off destroying our future.”

Nonetheless, the fossil fuel groups do not address in their pleadings the plaintiffs' constitutional claims, and though challenging the youth's standing to raise their claims, ignores the youth’s detailed description in their complaint of how each youth plaintiff is and will be harmed by the government’s actions and inactions.

“The science is clear,” said Dr. James Hansen. “To preserve a climate system conducive to humanity and nature alike, the burning of fossil fuel must be phased out without further delay, and completed within decades. It is the fundamental duty of our government to ensure that this is done in time to avert catastrophic sea level rise and other intolerable climate damage. I am not surprised that fossil fuel corporations seek to derail this case, but the fundamental rights of my granddaughter and future generations to life, liberty and pursuit of happiness must prevail.”