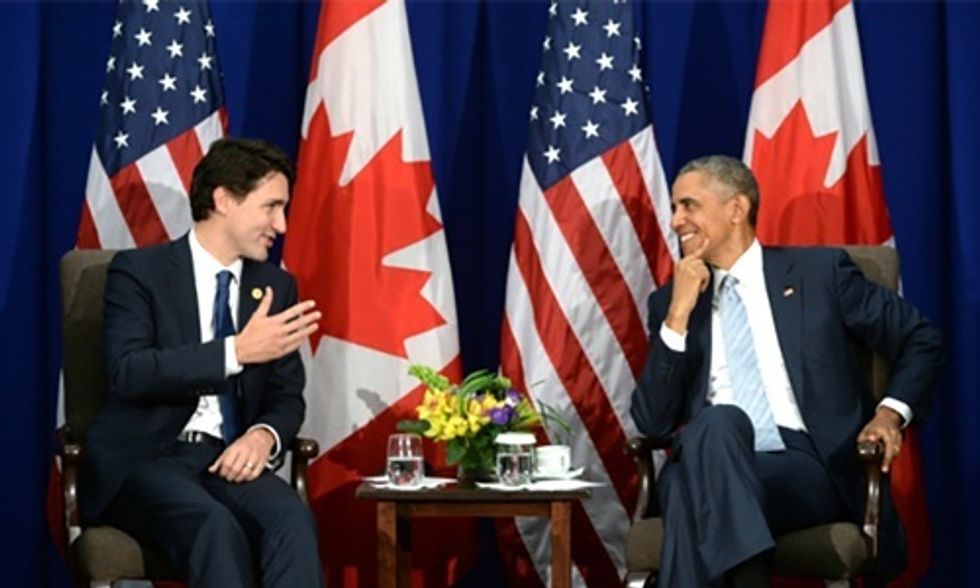 For five years, the struggle over the Keystone XL tar sands pipeline dominated U.S. and Canadian energy politics. When President Obama finally rejected the project last fall, he was able to start a new chapter with recently elected Prime Minister Trudeau, who seemed eager to move past the toxic politics of his predecessor, Stephen Harper.

But as Trudeau and Obama meet in Washington this week to discuss a joint approach on climate change, new fossil fuel fights, including several Keystone XL-like pipelines, pose challenges for both leaders and threaten to exacerbate tensions between neighbors.

As Trudeau and Obama meet in Washington this week to discuss a joint approach on climate change, new fossil fuel fights, including several Keystone XL-like pipelines, pose challenges for both leaders and threaten to exacerbate tensions between neighbors. Photo credit: Sean Kilpatrick / The Canadian Press

“Keystone XL was just the beginning,” said May Boeve, executive director of 350.org. “This movement is now engaged in major fossil fuel fights on both sides of the border and is ready to oppose any new project that is proposed. Keeping fossil fuels in the ground is the new test for climate leadership and both Trudeau and Obama have more work to do.”

Organizing under the “keep it in the ground” banner, 350.org and other climate groups are engaging in a continental wide fight against the fossil fuel industry, challenging new projects and going after existing production.

High up on the list are a group of other tar sands pipelines that resemble Keystone XL. In Canada, both the Kinder Morgan and Energy East projects are facing tough opposition. In the U.S., local and national groups have targeted a system of Enbridge pipelines proposed across the Midwest.

“If Trudeau is serious about the climate pledges he made in Paris, he needs to freeze tar sands expansion as soon as possible,” said Cam Fenton, Canadian tar sands campaign manager with 350.org. “You can play with the numbers all you want and there’s still no way to match further tar sands production with keeping global warming below 2 degrees, let alone 1.5 degrees. New pipelines fail the climate test, plain and simple.”

Activists are also pushing both leaders to go beyond the Arctic and protect all coastal areas from offshore drilling. President Obama came under fire last year for allowing Shell to explore for oil off the coast of Alaska. He’s now coming under increasing pressure to ban all new drilling in federal waters, including in the Pacific, Atlantic and Gulf of Mexico.

“The Arctic is a spectacular treasure and so are the people, cultures and ecosystems in the Gulf,” said Boeve. “No community should have to live with the risk of a massive oil spill and constant pollution from fossil fuel development, especially low income and communities of color who are on the front lines of climate change. These communities got hit with Katrina, got hit with the BP Oil Spill, but they’re fighting to recover each and every day. Our government shouldn’t keep putting them directly in harm’s way. We say protect the polar bears, but protect the people too.”

A broad coalition of groups in the Gulf are planning a major protest at an auction for offshore drilling permits at the Superdome in New Orleans this March 23. The demonstration will highlight the irony of selling more fossil fuels at a national landmark for climate impacts.

In Canada, Indigenous communities and First Nations have an Aboriginal rights legal regime comprised of inherent and treaty rights embedded in section 35 of the Canadian constitution. This is a considerable power that Prime Minister Trudeau must consider and deal with, according to Clayton Thomas-Muller, Stop It At The Source campaigner with 350.org.

“The Trudeau government ran on the election promise to respect the rights of Indigenous Peoples to say ‘No’ to pipeline projects on their lands, while also committing to implement the UN declaration on the rights of Indigenous Peoples across the board” said Thomas-Muller. “Using Transcanada’s Energy East or Kinder Morgan’s Transmountain tar sands pipelines as the trade off to deliver on these promises shows yet another campaign promise being broken and shows that the influence of oil lobbyist money to Ottawa continues to flow.”

Over the coming months, 350.org and its allies will continue to intensify the fight against the fossil fuel industry on both sides of the border, protesting fossil fuel extraction on public lands in the U.S. and pressuring the Canadian government to stop tar sands at the source.

In May, groups will be coming together under the “Break Free” platform, a worldwide week of action targeting major fossil fuel projects around the world. In the U.S., activists will target new tar sands pipelines in the Midwest, fracking in the Mountain West, "bomb trains" carrying fracked oil and gas in New York, refinery pollution north of Seattle, offshore drilling in an action in Washington, DC and dangerous oil and gas drilling in Los Angeles. In Canada, activists are preparing to protest tar sands development while calling for clean energy solutions for communities who were on the front lines of pollution and climate change.

“In Paris, world leaders made a promise to move the world beyond fossil fuels,” said Boeve. “We intend to hold them to it and do everything we can to accelerate that transition. This problem is ultimately a race against the clock. Luckily, this movement is beginning to really hit its stride.”