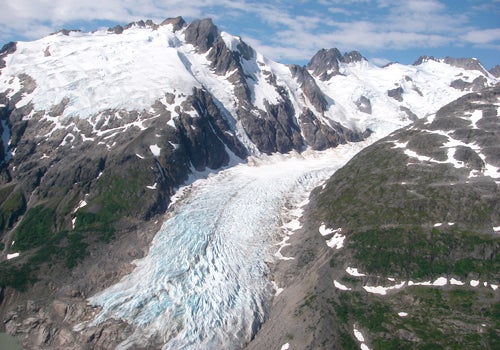 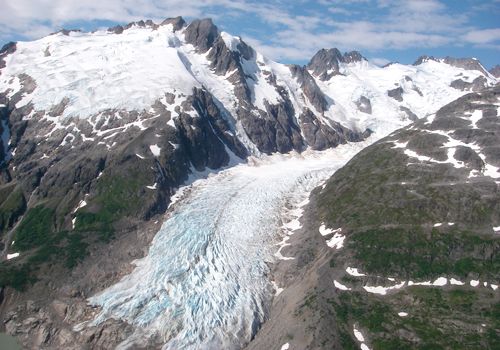 A new study concludes that fossil fuel emissions are likely contributors to a substantial amount of organic carbon found on glaciers in Alaska.

Fossil fuel emissions, which contain organic carbon, can speed up the rate of glacier melt when deposited on glacier surfaces. In addition, the organic molecules associated with these deposits can be transported in rivers and streams, affecting downstream aquatic ecosystems. Knowledge of the source and age of organic carbon in glaciers allows for a better understanding of these and other impacts.

Prior research suggested that the main sources of organic carbon in Alaska’s glaciers were from forests and peatlands overrun by glaciers as far back as ten thousand years ago. While old soil and plant material are still possible sources of glacial organic carbon, new research indicates that human-created, or anthropogenic, sources are also important.

“We knew the organic carbon present in Alaska’s glaciers was old, but identifying the sources of this material has been difficult due to the lack of chemical data,”ˇ said U.S. Geological Survey (USGS) scientist George Aiken.

While extensive burning of fossil fuels is, geologically speaking, a relatively modern practice, the fuels themselves and the resulting carbon emissions are ancient. This is because the fuels are formed from plants and microorganisms that lived millions of years ago.

“Now we know that a substantial amount of ancient organic matter associated with these and other glaciers is of anthropogenic origin,” said Aiken.

When organic matter and other materials from the atmosphere are deposited on the surface of a glacier, less sunlight can be reflected and, therefore, more radiation and heat are absorbed. Having these materials on snow and ice surfaces causes them to melt faster.

Another concern is impacts to ecosystems and species habitats. As an example, organic matter exported to coastal areas is a potential nutrient or food source for aquatic bacteria, phytoplankton, and small grazing zooplankton. Climate warming or other factors may change the amount and quality of organic carbon available to these organisms. These aquatic organisms are also the base of the food web for all aquatic communities.

“When trying to understand climate change and decipher the carbon cycle puzzle, we need to make sure that we are using all of the right pieces,” said USGS scientist Rob Striegl. “As part of that puzzle, we are studying the source and amount of carbon flowing into the Arctic Ocean. An understanding of the complete picture allows for the most informed decisions to protect our environment.”

“The Arctic is of special interest because what happens there, such as extensive glacier melt, has impacts on the rest of the world,” said Striegl. “Glacier environments, especially those in the high latitudes of the Arctic, are also among the most sensitive to climate warming.”

“Our new paper describes, for the first time, the detailed chemical composition of dissolved organic matter associated with glaciers and glacial meltwater in coastal Alaska and in Wyoming,” said Aiken.

“This study adds a twist to previous understandings, showing there is another source of organic carbon out there that needs to be considered,” said Striegl.

This study, published in the journal Nature Geosciences, was a collaborative effort of many institutions led primarily by the University of Alaska Southeast, Skidaway Institute of Oceanography, Woods Hole Research Center, and the USGS.

The Role of USGS Science

Earlier studies by the USGS, in collaboration with university researchers, found the presence of ancient organic carbon in the Yukon River and traced it back to meltwater from glaciers. For further analyses, USGS scientists continued those collaborations to sample meltwater from Mendenhall Glacier and Herbert Glacier in southeastern Alaska. The samples were then analyzed at USGS and university laboratories to develop the conclusions outlined in this new study.

“This truly is a collaborative effort, taking the expertise of many scientists to put the story together on the source of the carbon,”ˇ said Striegl. “The original work of the USGS in the Yukon basin helped form the questions and lab results contributed to answering the questions; but it took specialized instrumentation and scientific expertise from several other organizations to determine the final answer.”

Additional samples used for age dating and for other chemical characterization of the organic carbon of glaciers from other locations came from Gulkana Glacier in Alaska and from Fremont Glacier in Wyoming.

The Big Picture of Aquatic Carbon

The USGS has a long term goal of determining the source and fate of organic and inorganic carbon transported to coastal areas and oceans across the entire Nation. USGS research on the Yukon and other Arctic rivers is particularly focused on climate warming effects on mobilizing ancient carbon from permafrost to coastal regions and the Arctic Ocean. The USGS participates in the Arctic Great Rivers Observatory project, which is an international effort to study the six largest rivers, including the Yukon, which flow into the Arctic Ocean.