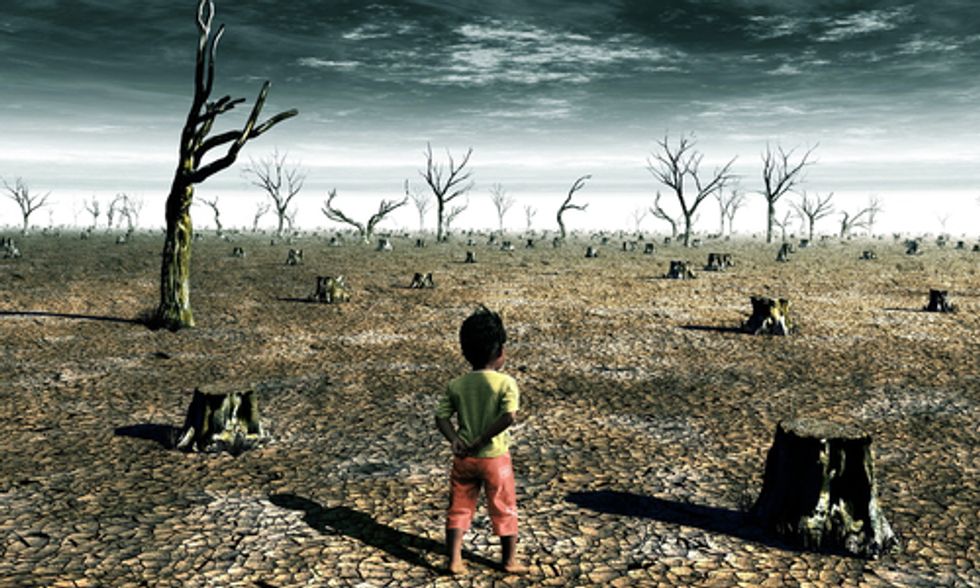 It’s become a cliché to say that out of crisis comes opportunity. But there’s no denying that when faced with crises, we have choices. The opportunity depends on what we decide to do.

What choices will we make when confronted with the fact that 2014 will likely be the hottest year on record? According to the U.S. National Oceanic and Atmospheric Administration, global land and sea temperatures up to September’s end tie this year with 1998 as the warmest since record keeping began in 1880. “If 2014 maintains this temperature departure from average for the remainder of the year, it will be the warmest year on record,” a NOAA statement says.

Will we take advantage of the numerous benefits of energy conservation and clean energy or remain stuck in the old way of just blindly burning our way through? The choice is clear.
Photo credit: Shutterstock

The world’s warmest 10 years have all been since 1998, and last year carbon dioxide levels rose by the highest amount in 30 years.

The Intergovernmental Panel on Climate Change’s Fifth Assessment Synthesis Report, released Nov. 2, summarizes three reports released over the past year on the physical science; impacts, adaptation and vulnerability; and mitigation. It offers a stark choice: Unless we quickly curtail our fossil fuel dependence, we face “further warming and long-lasting changes in all components of the climate system, increasing the likelihood of severe, pervasive and irreversible impacts for people and ecosystems.

As a broadcaster, I’ve interviewed hundreds of scientists over the years, but I’ve never heard so many speak so forcefully and urgently as climatologists today. It’s a measure of the seriousness of the crisis.

What choices will we make? Will politicians close their eyes while fossil fuel industry executives shovel money at them and enlist propagandists to spread misinformation and lies? Will we listen to those who, in the face of overwhelming scientific evidence, continue to say the global warming they once claimed never existed stopped 18 years ago, or that human activity doesn’t contribute to climate change?

Or will we heed scientists from around the world who offer evidence that we still have time to do something about this very real crisis—and that confronting the challenge presents more opportunities than pitfalls?

Believing our only choice is between a strong economy and a healthy environment is absurd. Yet that’s the false option many political leaders and fossil fuel industry proponents present. Never mind the insanity of thinking we can survive and be healthy if we destroy the natural systems on which we depend; research shows taking measured steps to address global warming would have few negative economic effects and would offer numerous benefits. Failing to act would be disastrous for the economy and environment.

The fast-growing clean-energy and clean-technology sectors offer similar benefits. Improved performance and cost reductions make large-scale deployment for many clean-energy technologies increasingly feasible. By focusing on fossil fuels, Canada is clearly missing out. Worldwide spending on clean energy last year was $207 billion. Canada spent $6.5 billion—a start, but we could do much better.

Germany, the world’s fourth-largest economy, now gets a third of its energy from renewable sources, and has reduced carbon emissions 23 percent from 1990 levels and created 370,000 jobs.

In contrast, Canada subsidizes the fossil fuel industry to the tune of $1.3 billion a year, despite a 2009 G20 agreement to phase out subsidies. The federal Environment and Sustainable Development Commissioner’s recent audit found Canada has no detailed plan to shrink carbon pollution and meet its international commitment, and has failed to release or enforce oil and gas sector emission regulations for our fastest-growing source of emissions, the oil sands, promised since 2006. Expanding oil sands and liquefied natural gas development will only make matters worse.

People around the world want leadership from elected representatives on climate change and pollution. Business leaders are getting on board. Will we take advantage of the numerous benefits of energy conservation and clean energy or remain stuck in the old way of just blindly burning our way through? The choice is clear.