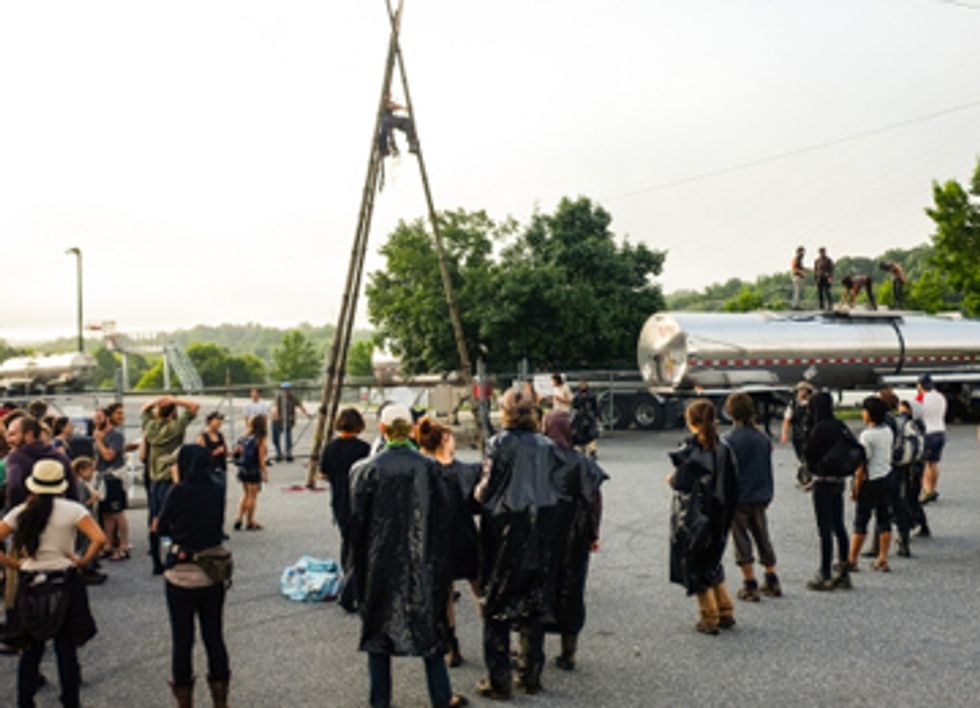 On the edge of the western mountain range in Morganton, NC, protesters with Croatan Earth First! are currently occupying an industrial manufacturing facility owned by Momentive and located at 114 Industrial Drive. North Carolinians, who have been fighting to prevent hydraulic fracturing from coming to central North Carolina are joined in this action by people from around the country who also oppose shale gas extraction nationwide.

Momentive is one of the largest worldwide distributors of “resin coated proppants,” a necessary component for high-volume slickwater hydraulic fracturing, also known as fracking. These chemicals are mixed with millions of gallons of freshwater during the fracking process and are designed to keep the fractures in rock or shale formations open, during or following a "fracturing treatment." Each fracturing stage requires approximately 136 tons of proppants.

“We are here to send a message to the oil and gas industries: we will not stand idly by as you destroy this land, or any other, for your personal profit. Respect existence, or expect resistance,” said an Earth First! activist.

The North Carolina Legislature plans to begin permitting frack sites as early as March 2015 in the Cumnock Shale Basin located underneath Lee, Moore, Chatham and surrounding counties. Fracking has been tied to water aquifer contamination in Pavilion, WY, according to a U.S. Environmental Protection Agency study and linked to high levels of methane in Pennsylvania water wells according to a study by Duke University. Researchers with Cornell University found that fracking operations nationwide released massive amounts of methane (a greenhouse gas) straight into the atmosphere, and concluded that, if not curbed, would speed climate change faster than carbon emissions.

The North Carolina Legislature is negotiating on the possibility of legalizing toxic wastewater injection in state or transporting it elsewhere. The process uses 1-8 million gallons of clean water each time a well is fracked.

“We are under drought conditions already, yet the oil and gas industry is allowed to pump millions of gallons of water out of our streams. This is devastating life in our rivers and streams. To make matters worse they send this water back into the riverways poisoned with radioactive materials,” said organizer Lydia Nickles. “Preserving our waters is preserving our lives and all life. We want an end to shale gas extraction everywhere.”

Activists with the Earth First! movement are calling on people nationwide to resist fracking where they live and organize solidarity actions.

“Even if you don’t have a rig in your area to shut down, you can affect the industry. Momentive and other companies that create proppants for the gas industry have facilities nationwide as well as internationally. It’s time to disrupt the chain of supply ... ”

Momentive’s worldwide headquarters are located in Columbus, OH, and other locations can be found on their website.

“We are acting in solidarity with and take inspiration from the courageous many who have been standing together to take action in the North Carolina capital during 'Moral Mondays,' and we encourage everyone to continue to show our collective power, acting up against the repressive corporate and legislative powers for the liberation of all and the integrity of land, water and air,” stated Croatan Earth First!