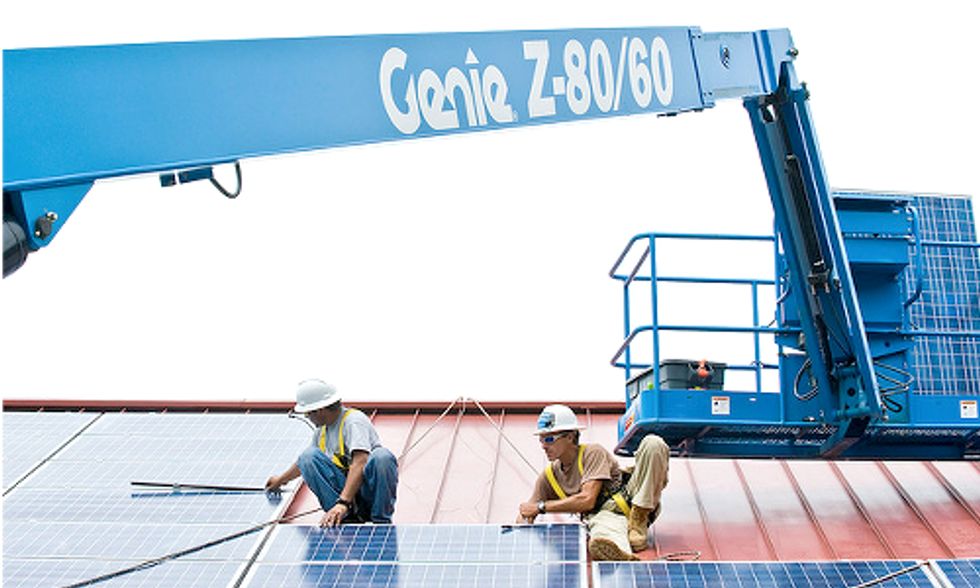 The latest good news about clean energy in Ohio is that the state ranks No. 8 in the nation for solar jobs. But despite this, 2014 has not ushered in a new era of civility or honest debate about the merits of Ohio’s clean energy standards that require a percentage of Ohio’s electricity demand be met with renewable energy and energy efficiency.

Instead, Bill Seitz, chair of the Ohio Senate Public Utilities Committee, started off the 2014 legislative session right where he left of last year: With misguided efforts to roll back Ohio’s successful clean energy policies.

Senator Seitz spent much of January and February holding hearings on Senate Bill 34 that would repeal Ohio’s renewable energy standard. Similar legislation inspired by the American Legislative Exchange Council has failed in Ohio and several other states in the past. And while this bill isn’t expected to make it out of committee, it does allow Senator Seitz to provide a venue for more attacks by fossil fuel-funded groups that make a living denying the reality of climate change and spreading misinformation about clean energy.

A who’s who of anti-clean-energy lobbyists

The Heartland Institute was there, best known for comparing those who believe the science around climate change to Unabomber Ted Kacynski. We fact checked the Heartland Institute’s false claims about Ohio’s renewable energy standard last year. We’ve also exposed their efforts nationally to mislead the public on the reality of climate change and the potential for renewable energy to cost-effectively produce electricity.

Also testifying was the Competitive Enterprise Institute (CEI), a group that found itself in hot water after one of its “scholars” compared  a prominent climate scientist to convicted child molester Jerry Sandusky. The Institute for Energy Research (IER) and Buckeye Institute were also there. All of these groups are funded by the Koch Brothers—kings of the fossil fuel special interest lobby.

And what are they using to make their case? Flawed, and in some cases outright biased reports that have been debunked by us and others. IER continues to recite misleading information from a 2009 report that has been discredited by everyone from the National Renewable Energy Laboratory to The Wall Street Journal. The Buckeye Institute provided testimony based in large part on another widely discredited analysis authored by the embattled Beacon Hill Institute, another group on the list of global warming skeptic organizations.

Now that Senator Seitz has given his fossil fuel interest buddies a chance to testify, Senate Bill 34 has been taken off the committee’s agenda. There was no opportunity for the majority of Ohioans, who believe the science behind climate change and support the state’s clean energy standards, to testify and set the record straight about how energy efficiency and renewable energy are benefiting the Buckeye State.

From one bad piece of legislation to the next

So what’s replacing Senate Bill 34 on the Public Utilities Committee agenda for this week? A new version of Senate Bill 58—the same bill that Senator Seitz tried to ram through the legislature last year and that was rejected by his own caucus because it was harmful to consumers and a huge give-away to Ohio’s largest utilities. We haven’t seen the new version yet, but given Senator Seitz’s repeated comparison of Ohio’s clean energy standards to Stalinist Russia, it’s a good bet that it isn’t friendly toward Ohio’s growing clean energy industries.

Senator Seitz is promising “devastating testimony” this week, most likely based on a recent report by Jonathan Lesser – a New Mexico-based consultant that has shown up in states across the country to provide his flawed brand of clean energy economics. His report attacks Ohio’s energy efficiency standard, claiming that because Ohio participates in a regional electricity market, the majority of the benefits of Ohio’s energy efficiency programs flow to other states that also participate in this market.

What he fails to address is how Ohio benefits from the energy efficiency standards enacted in Illinois, Pennsylvania, Delaware, Maryland, Indiana, Michigan, and Virginia that also reduce electricity demand and put downward pressure on electricity prices in this regional market. The American Council for an Energy Efficient Economy (ACEEE) did a great job of explaining the multiple ways that energy efficiency provides economic benefits to Ohio’s consumers when they testified before Senator Seitz’s committee nearly a year ago.

Ironically, Ohio Senate President Keith Faber was recently quoted calling for a discussion about Ohio’s clean energy standards based on “science and economics.”  We agree that the time is right for an honest and informed discussion about the role of renewable energy and energy efficiency in Ohio.

But the one-sided, special interest-driven attacks now under way in Senator Seitz’s committee clearly is not that discussion.