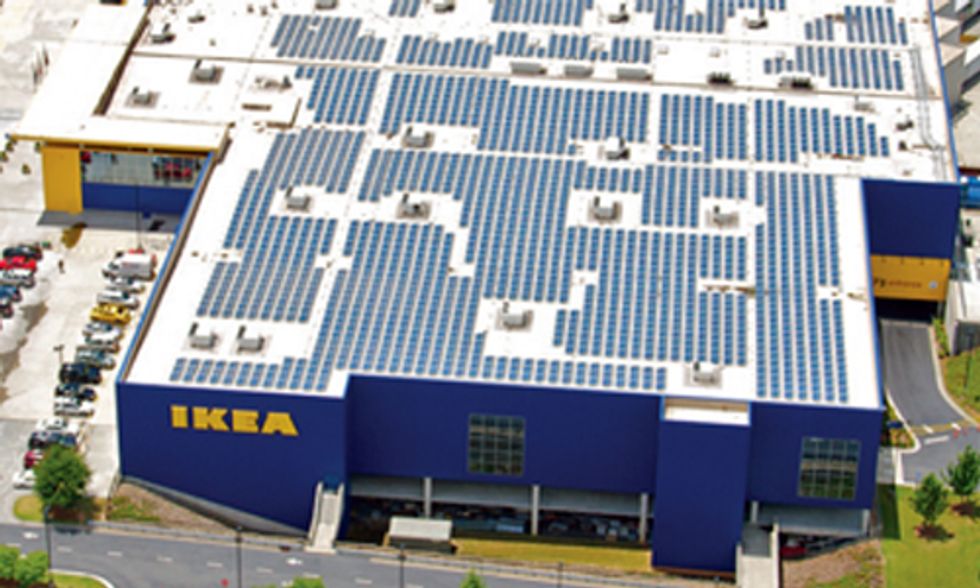 Q: What do Google, 223 other businesses, 14 attorneys general, 11 U.S. senators, and more than 25 environmental, public health and clean energy organizations all have in common?

A: They all told the Environmental Protection Agency (EPA) that renewable energy should play a strong role in reducing emissions from existing power plants under its proposed Clean Power Plan.

In fact, many of these groups explicitly endorsed the “Demonstrated Growth Approach” that the Union of Concerned Scientists (UCS) proposed in comments to the EPA, which would increase non-hydro renewable energy sources to 23 percent of U.S. electricity sales by 2030—or nearly double EPA’s proposed renewable energy target. Recent UCS analysis shows that achieving these levels is affordable and would result in additional reductions in U.S. power plant carbon emissions from EPA’s estimated 30 percent below 2005 levels to 40 percent. (For more details, see my October blog.)

IKEA has rooftop solar on 89 percent of its stores, including this store in Atlanta, GA, and meets more than one-third of its electricity needs with
renewable generation.

Google’s comments to the EPA called for stronger renewable energy targets, indicating that both of EPA’s approaches resulted in “modest” levels of renewable generation. Google also identified many of the same concerns with the EPA’s methodology that we highlighted in our comments, including:

Because of these and other anomalies in EPA’s methodology, Google concluded:

For all these reasons, we believe EPA underestimates the demand and opportunity presented by renewable energy over the next 10-20 years. Accordingly, the renewable energy goals in the final rule should better account for the full range of renewable energy opportunities in states and, at the least, should certainly be no less stringent than the additions of generation already required.

The main reason why Google is so bullish on renewable energy is because it’s good for their bottom line:

For example, using renewable energy helps Google diversify our power supply, provide protection against fuel price variability, and support business innovation and economic growth in the regions in which we operate. We are seeking affordable, reliable power that reduces our carbon footprint and meets the technology needs of our business … Today, renewable energy is more cost-effective in more regions of the country than ever before, and prices continue to decline.

Other Fortune 500 companies support a strong role for renewables

Like Google, 223 other businesses sent a letter to the EPA, emphasizing the important role that renewables and efficiency can play in reducing emissions and saving money as part of the Clean Power Plan. The letter was signed by 40 companies with over $100 million in annual revenues, including several Fortune 500 companies. This includes companies such as Kellogg’s, Starbucks, IKEA, Nike, Levi Strauss, Mars, and Nestlé that have recently made significant investments in renewables. For example:

Organized by the Business for Innovative Climate & Energy Policy (a project of Ceres) in coordination with CDP and the Climate Group, the letter stated:

Clean energy policies are good for our environment, the economy and companies. Increasingly, businesses rely on renewable energy and energy efficiency solutions to improve corporate performance and cut costs … 60 percent of the combined Fortune 100 and Global 100 companies have set a renewable energy goal, a greenhouse gas reduction goal or both. Today’s rules will help spur investment and provide the long-term certainty necessary for our businesses to thrive and to meet these goals.

For the Clean Power Plan to be a success, it must achieve the level of emission reductions that the science calls for to avoid the most dangerous impacts of climate change. Maximizing the deployment of cost-effective renewable energy and energy efficiency will be the key to achieve the necessary emissions reductions.

Other methodologies for determining potential renewable generation on a state-by-state basis, such as that proposed by the Union of Concerned Scientists, have confirmed that increased renewable generation is feasible and cost effective at even higher rates of adoption than projected by EPA … Thus, the States prefer an approach to the renewable energy building block that results in a target that aggressively captures the technical feasibility and market potential of renewable energy. Based on such an approach, the States also believe that there is a demonstrated basis for strengthening state-specific targets for some states.

More than 25 national and state non-profit organizations also supported the UCS Demonstrated Growth approach and several other options for strengthening the renewable energy targets in their comments to the EPA. This included major renewable energy business groups like the American Wind Energy Association, Solar Energy Industries Association and Advanced Energy Economy. It also included public health and environmental justice groups like the U.S. Climate & Health Alliance and WE ACT for Environmental Justice, and consumer groups such as Public Citizen, Consumer Action and Ohio Partners for Affordable Energy.

Next steps for the EPA

As the EPA weighs the millions of comments it received on the Clean Power Plan, this diverse and comprehensive support sends a strong signal to the EPA to strengthen the state renewable energy and emission reduction targets when the final rule is released next June.

When combined with stronger targets for energy efficiency, renewable energy allows states to affordably deliver the much deeper emission reductions that are needed to avoid the worst consequences of climate change.