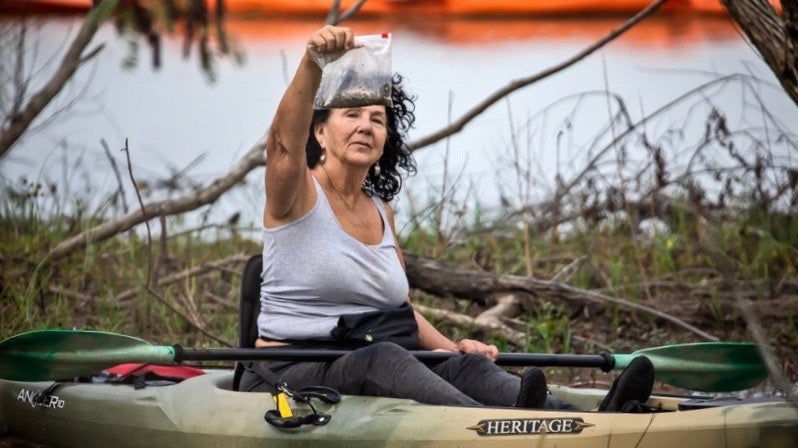 Diane Wilson holds up a bag full of nurdles she collected from one of Formosa's outfall areas on Jan. 15. Julie Dermansky / DeSmogBlog

On the afternoon of Jan. 15, activist Diane Wilson kicked off a San Antonio Estuary Waterkeeper meeting on the side of the road across from a Formosa plastics manufacturing plant in Point Comfort, Texas.

After Wilson and the waterkeeper successfully sued Formosa in 2017, the company agreed to no longer release even one of the tiny plastic pellets known as nurdles into the region’s waterways. The group of volunteers had assembled that day to check whether the plant was still discharging these raw materials of plastics manufacturing.

Diane Wilson kayaking to the fence line of Formosa’s Point Comfort plant to check for nurdles newly discharged from the plant on Jan. 15. Julie Dermansky / DeSmogBlog

Their suit against Formosa Plastics Corp. USA resulted in a -million-dollar settlement and a range of conditions in an agreement known as a consent decree. Key among the conditions was the company’s promise to halt releasing the nurdles it manufactures into local waterways leading to the Texas Gulf Coast by Jan. 15.

Wilson described the occasion as “day one of the zero discharge settlement.” As of that date, Formosa could be fined up to ,000 a day if it were found still discharging nurdles. That would put the multi-billion-dollar plastics maker in violation of the court settlement made after U.S. District Judge Kenneth Hoyt determined the company had violated the Clean Water Act by discharging plastic pellets and PVC powder into Lavaca Bay and Cox Creek in a June 27 ruling last year.

The deal, signed by Judge Hoyt in December, represents the U.S.’s largest settlement in a Clean Water Act lawsuit brought by private individuals against an industrial polluter. The settlement mandates that both Formosa and the plaintiffs agree to a monitor, remediation consultant, engineer, and trustee for ongoing monitoring of the plant.

Diane Wilson is seen with volunteers before their meeting across the street from Formosa’s Point Comfort manufacturing plant. Julie Dermansky / DeSmogBlog

After calling the group’s meeting to order, Wilson gave an update on how requirements of the consent decree were progressing. The volunteer team of nurdle monitors, who have been collecting nurdles discharged by the plant for the last four years, listened eagerly. Wilson said that Formosa had missed the Jan. 15 deadline to deliver the waivers they needed to sign, which would grant them permission to monitor on the company’s property along the fence line. Without the signed forms, the group put off their on-the-ground monitoring trip. Instead, they headed for the banks of Cox Creek, where Wilson set off in a kayak to check on one of the plant’s outfalls.

Within 10 minutes she collected an estimated 300 of the little plastic pellets. Wilson says she will save them as evidence, along with any additional material the group collects, to present to the official — and yet-to-be-selected — monitor.

Wilson received the waiver forms from Formosa a day after the deadline. The group planned to set out by foot on Jan. 18, which would allow them to cover more ground on their next monitoring trip. They hope to check all of the facility’s 14 outtakes where nurdles could be still be escaping. Any nurdles discharged on or after Jan. 15 in the area immediately surrounding the plant would be in violation of the court settlement.

Pointing along the creek’s edge, Ronnie Hamrick, a member of the San Antonio Estuary Waterkeeper and former Formosa employee, showed me how to distinguish new plastic pellets from the legacy nurdles from past discharges. The new ones are brighter and white compared to the older ones, which take on a dull gray color. Old nurdles were plentiful along the creek’s banks despite cleanup crews deployed by Formosa in that area. Newer ones were easy to find in the water after Hamrick pushed a rake into the marsh, stirring them up from below the water’s surface in Cox Creek.

When Wilson returned from her kayak, she showcased her find: The nurdles she had just collected from the Formosa outfall were bright white, making them easy to distinguish from the older ones littering the bank where she had launched her kayak. She plans to turn them over as evidence of newly discharged nurdles to the official monitor once one is selected in accordance to the consent decree.

The news made Wilson smile. “I hope they win. The best way to stop the company from polluting is not to let them build another plant,” she told me.

The lawsuit was filed in federal court against the Army Corps of Engineers, accusing the Corps of failing to disclose environmental damage and public health risks and failing to adequately consider environmental damage from the proposed plastics plant. Wilson had met some of the Louisiana-based activists last year when a group of them had traveled to Point Comfort and protested with her outside Formosa’s plastics plant that had begun operations in 1983. Among them was Sharon Lavigne, founder of the community group Rise St. James, who lives just over a mile and a half from the proposed plastics complex in Louisiana.

Back then, Wilson offered them encouragement in their fight. A few months after winning her own case last June, she gave them boxes of nurdles she had used in her case against Formosa. The Center for Biological Diversity, one of the environmental groups in the Louisiana lawsuit, transported the nurdles to St. James. The hope was that these plastic pellets would help environmental advocates there convince Louisiana regulators to deny Formosa’s request for air permits required for building its proposed St. James plastics complex that would also produce nurdles. On Jan. 6, Formosa received those permits, but it still has a few more steps before receiving full approval for the plant.

Anne Rolfes, founder of the Louisiana Bucket Brigade, holding up a bag of nurdles discharged from Formosa’s Point Comfort, Texas plant, at a protest against the company’s proposed St. James plant in Baton Rouge, Louisiana, on Dec. 10, 2019. Julie Dermansky / DeSmogBlog

In their Jan. 15 lawsuit, the groups, which also include Louisiana Bucket Brigade, and Healthy Gulf, point out that a Texas judge called Formosa’s Point Comfort plant a “serial offender” of the Clean Water Act. They also cite another Formosa facility in Baton Rouge, Louisiana, which has been in violation of the Clean Air Act every quarter since 2009.

The new plant slated for St. James Parish “is expected to emit and discharge a variety of pollutants, including carcinogens and endocrine disrupters, into the air and water; [and] discharge plastic into the Mississippi River and other waterbodies,” the lawsuit alleges.

“Wilson’s victory against Formosa was very encouraging,” Sharon Lavigne told me over the phone. She plans to cite it as one of the many reasons why the St. James Parish Council should reverse its 2018 decision to grant Formosa a land use permit for the sprawling plastics facility. She and others will address the council over a multitude of issues at its upcoming Jan. 21 meeting.

From the Gulf Coast to Europe

Just a day after Wilson found apparently new nurdles in Point Comfort, the Plastic Soup Foundation, an advocacy group based in Amsterdam, took legal steps to stop plastic pellet pollution in Europe. On behalf of the group, environmental lawyers submitted an enforcement request to a Dutch environmental protection agency, which is responsible for regulating the cleanup of nurdles polluting waterways in the Netherlands.

The foundation is the first organization in Europe to take legal steps to stop plastic pellet pollution. It cites in its enforcement request to regulators Wilson’s victory in obtaining a “zero discharge” promise from Formosa and is seeking a similar result against Ducor Petrochemicals, the Rotterdam plastic producer. Its goal is to prod regulators into forcing Ducor to remove tens of millions of plastic pellets from the banks immediately surrounding its petrochemical plant.

Detail of a warning sign near the Point Comfort Formosa plant. The waterways near the plant are polluted by numerous industrial facilities in the area. Julie Dermansky / DeSmogBlog

Besides polluting waterways, the ongoing build-out of the petrochemical and plastics industry doesn’t align with efforts to keep global warming in check.

Wilson and her fellow volunteers plan to keep monitoring the Point Comfort plant until it stops discharging the tiny plastic pellets into Texas waters entirely.

Nurdles on Cox Creek’s bank on Jan. 15. Wilson hopes her and her colleagues’ work of the past four years will help prevent the building of more plastics plants, including the proposed Formosa plant in St. James Parish. Julie Dermansky / DeSmogBlog

I reached out to Formosa about whether it was aware its Point Comfort plant was apparently still discharging nurdles but didn’t receive a reply before publication.

A sign noting the entrance to the Formosa Wetlands Walkway at Port Lavaca Beach. The San Antonio Estuary Waterkeeper describes the messaging as an example of greenwashing. Julie Dermansky / DeSmogBlog