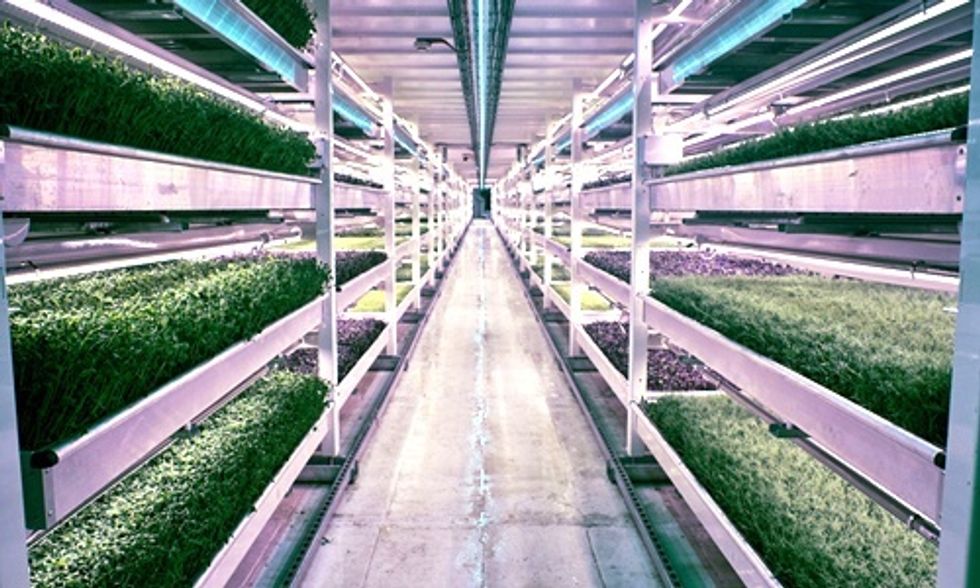 It's probably the last place you would think of for growing food, but about 100 feet below London, the one-year old startup Growing Underground is producing what it calls "sustainable and mouth-wateringly fresh micro greens and salad." It's the world's first subterranean farm. The site, a bomb shelter during World War II, was abandoned for 70 years until entrepreneurs Richard Ballard and Steven Dring came along.

Growing beds are stacked on top of each other inside this former World War II bomb shelter. Photo credit: Zero Carbon Food

Once fully operational, it's estimated that the system will be able to produce between 11,000 and 44,000 pounds of produce each year. “The whole system runs automatically, with an environmental computer controlling the lighting, temperature, nutrients and air flow,” Steven Dring, co-founder of the parent company, Zero Carbon Food, told Bloomberg.

Growing Underground claims it is carbon neutral and is working on certification. And it touts a number of other environmental benefits. "Our hydroponics system uses 70 percent less water than traditional open-field farming, and because all the nutrients are kept within the closed-loop system we run no risk of contributing to agricultural run-off," says Growing Underground. They've pledged that their produce will travel no further than the M25 motorway that encircles Greater London.

It’s already partnered with local food delivery company Farmdrop and is in discussions with Whole Foods, says Bloomberg. And thanks to a partnership with chef Michel Roux, Jr., the company is partnering with local restaurants to deliver farm-to-table produce in under four hours. "It’s great to be involved in this ambitious project, for which we have ambitious growth plans," says Roux. "Above all it’s fantastic to source produce so fresh in the heart of Britain’s largest city."

The project is just one of the many creative ways cities around the world are re-localizing agriculture. For cities with a vast underground network like London, subterranean farming makes sense. In the U.S., many cities are turning abandoned warehouses into indoor vertical farms. Sky Farms in Singapore has been heralded as “the world’s first low-carbon hydraulic driven urban vertical farm.” Mirai, a vertical farm in Japan, is producing up to 10,000 heads of lettuce a day. Newark, New Jersey will soon be home to the world’s largest indoor vertical farm, which is set to launch in November.