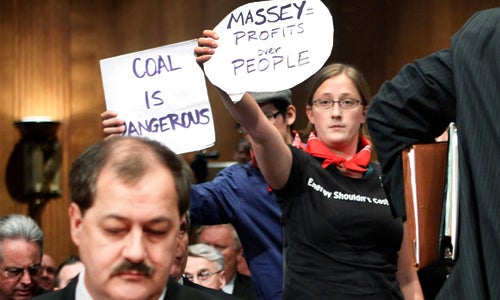 For decades, big coal companies have violated mine safety regulations with at most a slap on the wrist, while spending millions to lobby and electioneer for weakening those regulations. Now the chickens have come home to roost for one former coal company CEO as a federal grand jury in Charleston, West Virginia indicted former longtime Massey Energy CEO Don Blankenship yesterday on charges that he deliberately flouted safety standards leading to the death of 29 miners in an April 2010 explosion at its Upper Big Branch Mine (UBB), reports the Charleston Gazette. 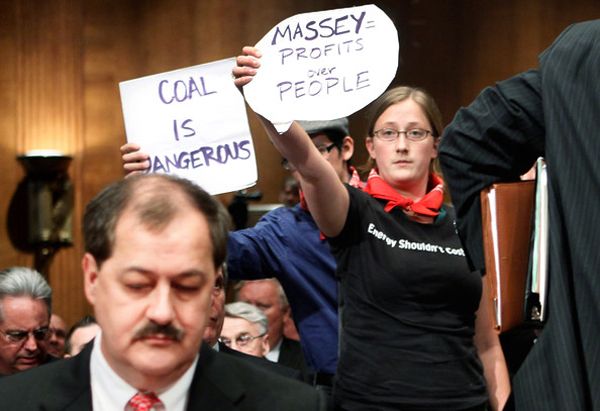 Protester Kate Rooth (R) holds a sign as Chairman and CEO of Massey Energy Don Blankenship (L) prepares to testify for a hearing before the Labor, Health and Human Services, Education, and Related Agencies Subcommittee of the Senate Appropriations Committee May 20, 2010 on Capitol Hill in Washington, DC. The hearing was to examine issues regarding the safety of coal mining. Photo credit: Alex Wong

“Blankenship knew that UBB was committing hundreds of safety-law violations every year and that he had the ability to prevent most of the violations that UBB was committing,” the indictment said. “Yet he fostered and participated in an understanding that perpetuated UBB’s practice of routine safety violations, in order to produce more coal, avoid the costs of following safety laws and make more money.”

The grand jury found that failure to provide adequate airflow, coal dust accumulation and an inadequate number of mine safety workers were among the factors contributing to the explosion that were routinely ignored by the company. The accident was the worst mining disaster in the U.S. since 1940 and followed a long record of health and safety violations at the mine. The U.S. Mine Safety and Health Administration (MSHA) later issued 369 citations for safety violations and assessed a $10.8 million fine. The indictment charges Massey with three felonies and one misdemeanor with a potential of 31 years in prison for the former CEO who led the company for almost two decades.

“It’s an important day for many, many families in the Central Appalachian coal fields,” Bruce Stanley, a Pittsburgh attorney who has fought Blankenship on behalf of miners’ widows and a rival coal operator who alleged Massey drove him out of business, told the Charleston Gazette. “For the first time in my memory, the CEO of a major coal producer is being held criminally accountable for the atrocious conduct that occurred on his watch.”

The indictment details threat after threat made to mine management to ignore safety in order to maximize profit.

One such charge says, “On or around April 29, 2008, Blankenship sent the known UBB Executive another handwritten message chastising him for not producing coal as quickly as Blankenship wanted at one of the mines in the UBB mining group. This message instructed the Known UBB Executive, ‘Run coal. Don’t bolt for the year 2525.’ This message was an instruction to increase coal production by devoting less time to the installation of roof bolts, which were a form of roof support.” He charged another with “‘insufficient attention to cost-cutting,” and told him “You have a kid to feed. Do your job.”

The investigation of the explosion has already led to the convictions of four former officials at UBB which was sold in late 2010 to Alpha Natural Resources. But Blankenship, who retired following the sale, is the really big fish. He was a major power broker in West Virginia politics who among other things helped engineer the election of a friendly supreme court justice prior to a case involving the company coming before the court.

Blankenship was typically arrogant and unrepentant. His attorney issued a statement saying, “Don Blankenship has been a tireless advocate for mine safety. His outspoken criticism of powerful bureaucrats has earned this indictment. He will not yield to their effort to silence him. He will not be intimidated.”

The response on the Facebook page of nonprofit community advocacy group Appalachian Voices was exultant but skeptical. Posters called him “a murderous, callous lowlife” and said “It’s a multi-headed snake, but at least one just got lopped off,” while also saying “The party that wants to get rid of OSHA was just given a lot of power to do just that by the same people that these companies are killing.”

“Don Blankenship once boasted to me that it was impossible to conduct mountaintop removal mining without violating the law. He prided himself on his cold-blooded capacity for turning America’s purple mountains majesty into coal company cash. His criminal mind allowed him to view the human beings of Appalachia as disposable production units. He is a sociopath and gangster who’s gift was felonious greed and a stone-cold heart that allowed him to put his yearning for money and power ahead of human lives. Those qualities had great value to his friends and investors: the Wall Street robber barons. But they were poison and destruction to the noble communities of coal country.  We can’t bring back the towns he destroyed, the lives he took, the mountains he flattened, the rivers he poisoned, but there is some consolation in knowing that he’s getting what he deserves: three hots and a cot and long days in the company of fellow criminals of lesser appetites and lesser distinction.”