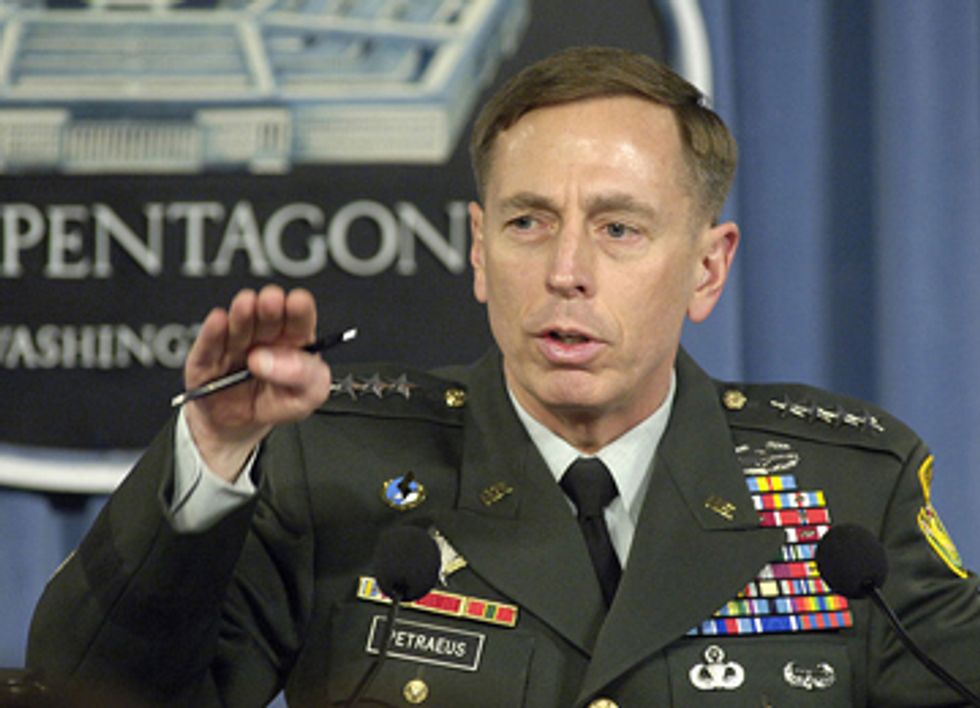 Records obtained by DeSmogBlog pertaining to City University of New York (CUNY) Macaulay Honors College's hiring of former head of the Central Intelligence Agency (CIA) David Petraeus to teach a seminar this coming fall reveal that his syllabus features two of the most well-known "frackademia" studies.

"Frackademia" is shorthand for oil and gas industry-funded research costumed as independent economics or science covering the topic of hydraulic fracturing, or fracking, the controversial horizontal drilling process via which oil and gas is obtained deep within shale rock basins.

One of them is a study written by industry-funded National Economic Research Associates (NERA) concluding liquefied natural gas (LNG) exports are beneficial to the U.S. economy, despite the fact that exporting fracked gas will raise domestic home-heating and manufacturing prices. NERA was founded by "father of deregulation" Alfred E. Kahn. The study Petraeus will have his students read was contracted out by the U.S. Department of Energy (DOE) to NERA.

The other, a study written by then-Massachusetts Institute of Technology (MIT) research professor Ernest Moniz—now the head of the DOE—is titled "The Future of Natural Gas" and also covers LNG exports. DOE oversees the permitting process for LNG exports. That study was funded by the Clean Skies Foundation, a front group for Chesapeake Energy and covered in-depth in the Public Accountability Initiative's report titled, Industry Partner or Industry Puppet?

Together, the two crucial studies on the syllabus reading list—and the lack of critical readings on the topic of fracking—offers a glimpse into the stamp of legitimacy industry-funded studies get when they have the logo of elite research universities on them. It's also another portrayal of the ascendancy of the corporate university.

In the case of Petraeus, the original "Petraeusgate" scandal centered around the $200,000 fee the Honors College planned on paying him for his role as an adjunct professor set to teach one course. A normal CUNY Honors College adjunct receives $3,000 per course.

Recently, Petraeus—who the late Rolling Stone investigative journalist Michael Hastings pejoratively referred to as "King David" in reference to the role he played in implementing counterinsurgency doctrine in U.S.-occupied Iraq—took a pay cut down to $1 to teach the course. That doesn't include the money he'll still get from an unidentified private donor referred to in other documents.

That scandal sat on top of the scandal that led to his resignation from the CIA in the first place: an extramarital affair with Paula Broadwell, who at the time of the affair was writing a biography about him titled, All In: The Education of General David Petraeus.

Petraeus has also taught the shale gas industry some important things, as well.

Namely, Petraeus was one of the co-authors of the Counterinsurgency (COIN) Field Manual that Anadarko Petroleum PR hand Matt Carmichael said he has employees read at the “Media & Stakeholder Relations: Hydraulic Fracturing Initiative 2011” conference in Houston, TX, in 2011.

"Download the U.S. Army/Marine Corps Counterinsurgency Manual because we are dealing with an insurgency," said Carmichael at the conference. "There’s a lot of good lessons in there, and coming from a military background, I found the insight in that extremely remarkable."

One of the key COIN tactics covered in the Field Manual is psychological operations (PSYOPs), also discussed at the Houston conference by Range Resources spokesman Matt Pitzarella.

"We have several former PSYOPs folks that work for us at Range because they’re very comfortable in dealing with localized issues and local governments," Pitzarella said to the audience in Houston.

"Really all they do is spend most of their time helping folks develop local ordinances and things like that. But very much having that understanding of PSYOPs in the Army and in the Middle East has applied very helpfully here for us in Pennsylvania."

As Hastings covered in another Rolling Stone investigation, the U.S. military employed PSYOPs tactics on members of Congress. That's illegal within U.S. borders under the Smith-Mundt Act of 1948, though it seems rather unlikely the co-author of the COIN Manual—"King David" himself—will cover these details in his course.

Petraus also has a teaching gig at University of Southern California (USC) and a day job working at the Wall Street firm Kohlberg Kravis Roberts (KKR).

"He is expected to advise on economic trends, issues with foreign governments and other matters that could affect transactions," The Wall Street Journal explained of his hiring at KKR. "He will advise firms owned by KKR in an effort to improve management and leadership and help them confront economic and geopolitical forces that affect them."

Petraeus' job description mirrors the course description he will teach, lending insight into what type of jobs the students taking his course may obtain in the future if Petraeus' class is a pedagogical success.

"Petraeus and others at the firm [will have] discussions over macroeconomic and geopolitical forces that could influence KKR's investment decisions. These issues include the heightened role of central banks following the financial crisis, and what KKR views as 'revolutions' in energy, manufacturing and technology, among other areas," The Wall Street Journal further spelled out.

The course description, as seen below, sings a similar tune:

Students taking Petraeus' course will go above and beyond passive stoic discussion of the burning public policy issues of the day. Indeed, they will dive into the sphere of role-playing the positions of high-ranking U.S. officialdom, all in the context of the readings—such as the "frackademia" ones—they must complete and discuss in seminar on a weekly basis that will inform the role-play.

The government-industry revolving door commonly refers to governmental officials leaving taxpayer-funded government gigs for jobs as corporate lobbyists, public relations spin-doctors and other related iterations. The evolution and corporatization of research unversities - in many ways research factories on behalf of multinational corporations - has seen the revolving door extend into higher education.

Petraeus is one example and Moniz is another, but so too is former CIA-head Robert Gates. After leaving the CIA, Gates became the Chancellor of University of Texas A&M and then became Secretary of Defense.

Another example is Janet Napolitano, former head of the Department of Homeland Security who recently secured a job to head the University of California System. And yet another example is John Deutch, former head of the CIA who is now on the Board of Directors of Cheniere, served on President Obama's DOE Fracking Subcommittee and is a professor at MIT, where he co-wrote the "The Future of Natural Gas" with Moniz that Petraeus will have his students read.

"Petraeusgate," then, is just the tip of the iceberg of a problem with much deeper roots.