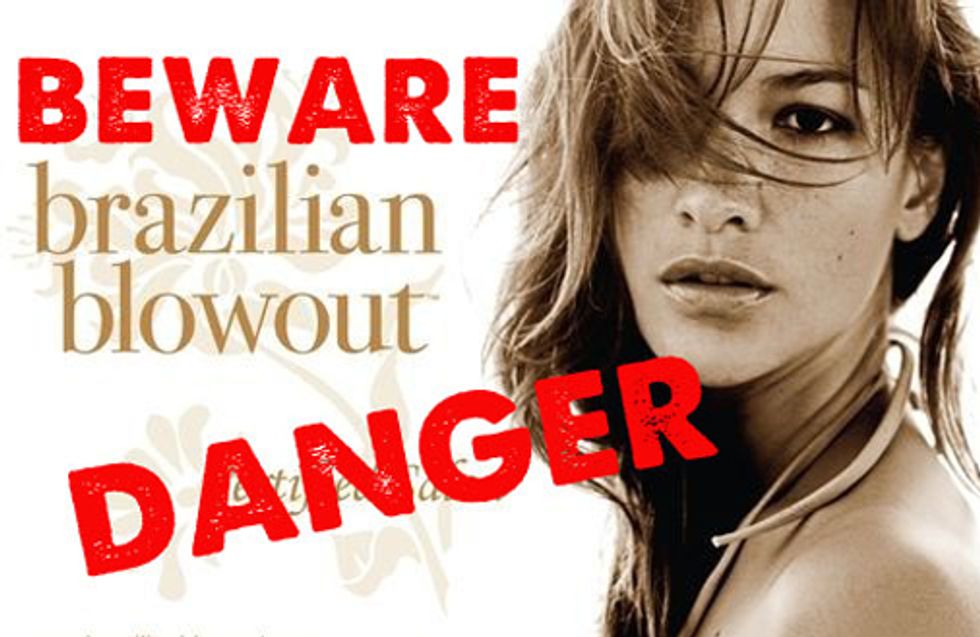 Health advocates are ramping up pressure on the U.S. Food and Drug Administration (FDA) to remove the keratin hair-straightening product Brazilian Blowout from the marketplace in light of a legal settlement announced Jan. 30 in a California court against the company that makes the product.

The manufacturers of Brazilian Blowout and Acai Professional Smoothing Solution must cease deceptive advertising practices and put caution stickers on their products advising users that the product releases formaldehyde gas, according to the settlement agreement with California Attorney General Kamala Harris’s office. The settlement is the first comprehensive and enforceable action by U.S. government authorities to address formaldehyde exposures associated with use of these products.

Formaldehyde is a known human carcinogen, according to the U.S. National Toxicology Program, and it can cause both acute and long-term health effects in sensitive persons, including breathing difficulties, bloody noses and nausea.

“Every day, salon workers across the U.S. are being exposed to dangerous levels of formaldehyde from hair smoothing products that have been banned for over a year in Canada and other countries,” said Alexandra Scranton of the National Healthy Nail and Beauty Salon Alliance. “It’s time for the FDA to take a stand against this company that has a history of deception and consumer disregard.”

Despite all of these violations, the warning requirements are the maximum penalty that could be achieved under state law.

“We commend the California Attorney General’s office for accomplishing what no other government agency in the U.S. has been able to do: force Brazilian Blowout to be honest with salons about the risk of their products. We are also proud that this lawsuit was the first legal action taken by the state under the authority of the California Safe Cosmetics Act of 2005, which forces companies to publicly disclose the presence of cancer-causing chemicals in cosmetics sold in the state,” said Stacy Malkan, co-founder of the Campaign for Safe Cosmetics.

“But the legal settlement, while helpful, is not enough to protect the public. The FDA must now follow through on its threat to seize these dangerous hair-straightening products.”

In a letter dated August 11, 2011, the FDA accused Brazilian Blowout of selling products that are misbranded and contain deleterious substances, in violation of the federal Food, Drug and Cosmetics Act of 1938. Failure to correct the violations “may result in enforcement action without further notice, including, but not limited to, seizure and/or injunction,” states the FDA letter, that can be read by clicking here.

“Obviously, these violations have not been addressed sufficiently,” said Anuja Mendiratta of the National Healthy Nail and Beauty Salon Alliance. “The California Attorney General’s settlement makes it clear that Brazilian Blowout has been selling products containing hazardous substances and marketing them as safe. The FDA must take action today to protect salon workers who are being exposed to dangerous levels of formaldehyde every day.”

The federal Safe Cosmetics Act, introduced into the U.S. House of Representatives in July 2011 by Reps. Jan Schakowsky (D-IL), Ed Markey (D-MA) and Tammy Baldwin (D-WI) would ban chemicals known to cause cancer from cosmetics, as many other countries have already done.

“The Brazilian Blowout scandal is the perfect case study to showcase our broken regulatory system,” said Jennifer Goeres-Arce, a hair stylist in the San Diego area who contributed evidence for the state’s lawsuit against the company. “A year after other countries banned Brazilian Blowout, countless salon workers in the U.S. have been unnecessarily exposed to formaldehyde, and we are just now getting around to requiring the company to be honest about the risks of their products. It’s time to give the FDA the power and resources to protect the American public from toxic chemicals in cosmetics.”

The National Healthy Nail and Beauty Salon Alliance is encouraging people who have experienced health symptoms after being exposed to Brazilian Blowout-style hair straighteners to write letters to the FDA by clicking here.

The Alliance and the Campaign for Safe Cosmetics are asking FDA to remove Brazilian Blowout products from the marketplace and to ban formaldehyde from all hair products. To learn more, click here.

The Campaign for Safe Cosmetics is a coalition of more than 150 nonprofit organizations working to protect the health of consumers and workers by eliminating dangerous chemicals from cosmetics. Core members include: Clean Water Action, the Breast Cancer Fund, Commonweal, Environmental Working Group, Friends of the Earth, Massachusetts Breast Cancer Coalition and Women’s Voices for the Earth.