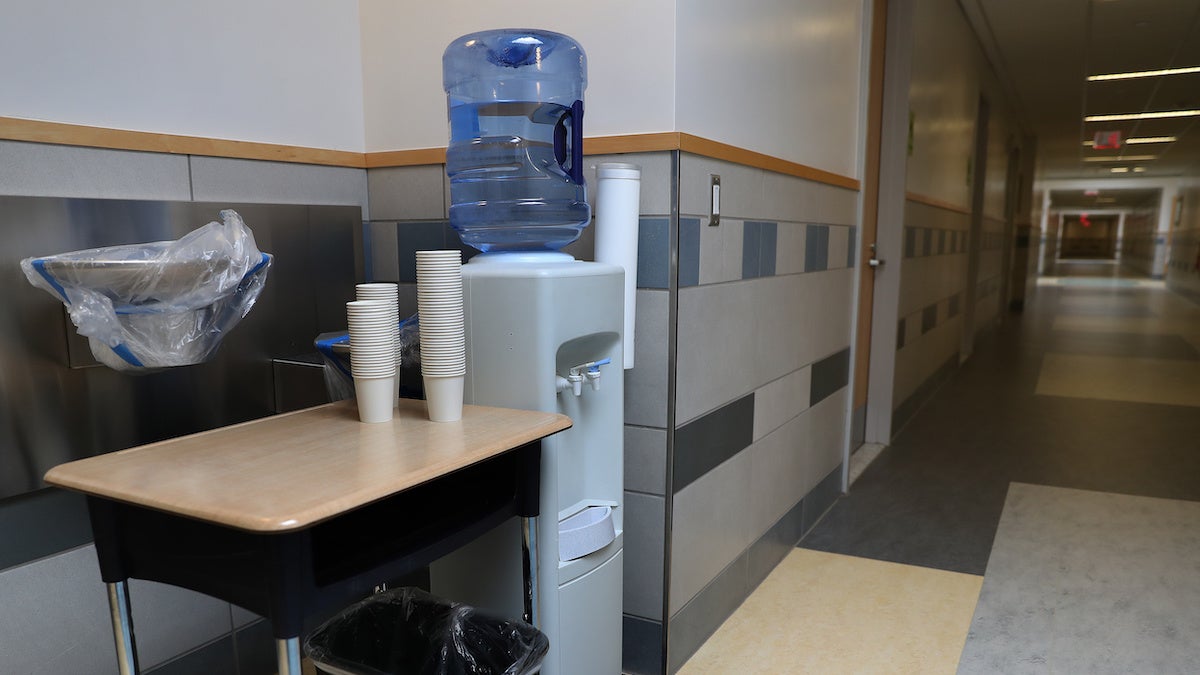 Water coolers in front of shut-off water fountains at Center School in Stow, MA on Sept. 4, 2019 after elevated levels of PFAS were found in the water. David L. Ryan / The Boston Globe via Getty Images

That includes dozens of cities, including major metropolitan areas like Miami, New York, New Orleans, Washington, DC, and Philadelphia, according to the new report.

The Environmental Working Group, or EWG, tested water samples from 44 different locations in 31 states. Only one of those cites had no detectable level of PFAS, or forever chemicals as they are known since they do not degrade in the environment or body, but rather build up in our blood and organs. Some of the major metropolises that were tested had the highest concentrations of detectable PFAS in their water. The only sample without detectable PFAS was from Meridian, Mississippi, which draws its drinking water from wells more than 700 feet deep.

Exposure to PFAS increases the risk of cancer, harms fetus development and reduces the effectiveness of vaccines. Biomonitoring studies by the federal Centers for Disease Control and Prevention show that the blood of nearly all Americans is contaminated with PFAS, according to the EWG report.

The EWG test looked for 30 different PFAS in the water, with most samples showing six or seven detectable PFAS, while one sample had 13, according to Dave Andrews, Ph.D. a senior scientist at the EWG, who spoke to reporters on Wednesday.

Andrews added that the U.S. Environmental Protection Agency (EPA) set an advisory threshold for only two known PFAS in the mid-90s at 70 parts per trillion. The EWG believes that number is 70 times above the threshold for toxicity and falls short of what is needed since there are hundreds or thousands of PFAS that are known contaminants.

The EWG numbers also take into account a combination of PFAS, which the EPA does not, meaning the comparisons are skewed.

For example, a water sample in Philadelphia had 46.3 parts per trillion (ppt) of PFAS, but that comes from adding up 11 different chemicals that were found. The EPA only has limits for PFOS and PFOA, which tested at 5.3ppt and 7.7ppt — or around one-tenth of the EPA’s threshold for concern, according to their detailed analysis.

However, the greatest concentration of PFAS contamination was taken from Bellville Elementary School in New Brunswick County, North Carolina by the nonprofit group Clean Cape Fear. It had a staggering 185.9 ppt.

“This is particularly painful as a school teacher, a parent of four children, and a mayor,” said Rob Allen, the mayor of Hoosick Falls, NY, which has PFAS contaminated water, in a conference call with journalists. “Our children are unwittingly poisoned from drinking water at school.”

“I’m devastated to see my children’s school at the top of this nationwide study,” said Emily Donovan, co-founder of Clean Cape Fear, in an EWG press release. “This is wrong. I’m so sad.”

UPDATE: Bottle water was delivered to Belville Elementary School earlier today. Have any other schools in Brunswick or New Hanover County received bottled water as an added precaution? The majority of our public schools drink from the toxic Cape Fear… https://t.co/yCoh3uOf8D

The recent findings raised the ire of actor and environmental activist, Mark Ruffalo, who starred in the movie Dark Waters, about the PFAS contamination from a DuPont plant into the water of Parkersburg, West Virginia.

“Decades of chemical industry deception and government inaction and collusion have brought us to this crisis,” said Mark Ruffalo, the star and a producer of the film, and a longtime environmental activist, in an EWG statement. “Nearly every American is carrying these dangerous chemicals in their blood, and as EWG’s new findings show, everywhere we look, we find more PFAS contamination of our tap water. The government has done little or nothing in 20 years, so it’s time for all of us to demand that our elected leaders do their jobs and pass laws to clean up this mess.”

His call to action was echoed by EWG scientists, “This research reveals that escaping PFAS pollution is nearly impossible,” said Olga Naidenko, Ph.D., EWG vice president for science investigations, who led the new study. “Communities and families all across the nation are bearing the burden of chemical companies’ callous disregard for human health and the government’s inaction. This crisis calls for immediate action to ensure that all Americans have safe and clean drinking water.”

While the two most notorious PFAS that were produced by DuPont and 3M have been phased out of use, Andrews told reporters that he worries that replacement chemicals are no better and are continuing to contaminate water supplies.