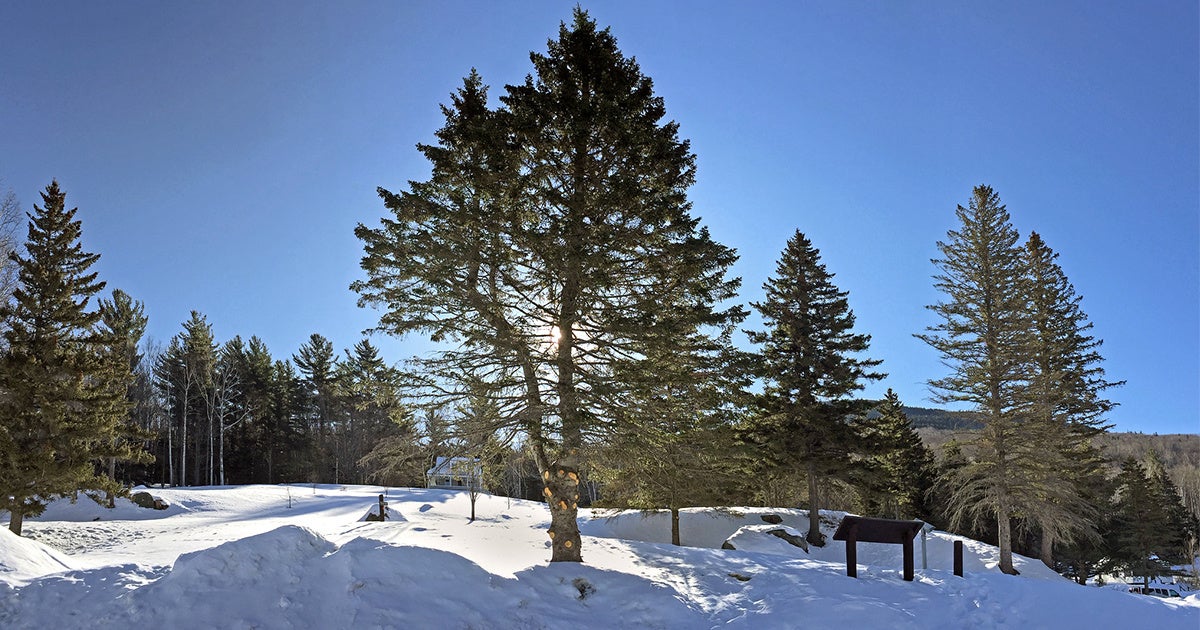 By Andrew Reinmann and Pamela Templer

Climate change often conjures up images of heat, drought and hurricanes. But according to the latest U.S. National Climate Assessment, released on Nov. 23, 2018, winters have warmed three times faster than summers in the Northeast in recent years. These changes are also producing significant effects.

Historically, more than 50 percent of the northern hemisphere has had snow cover in winter. Now warmer temperatures are reducing the depth and duration of winter snow cover. Many people assume that winter is a dormant time for organisms in cold climates, but decades of research now shows that winter climate conditions—particularly snowpack—are important regulators of the health of forest ecosystems and organisms that live in them.

In particular, our work over the last decade shows that declining snow cover may impair tree health and reduce forests’ ability to filter air and water. Our latest study finds that continued winter warming could greatly reduce snow cover across the northeastern U.S., causing large declines in tree growth and forest carbon storage. 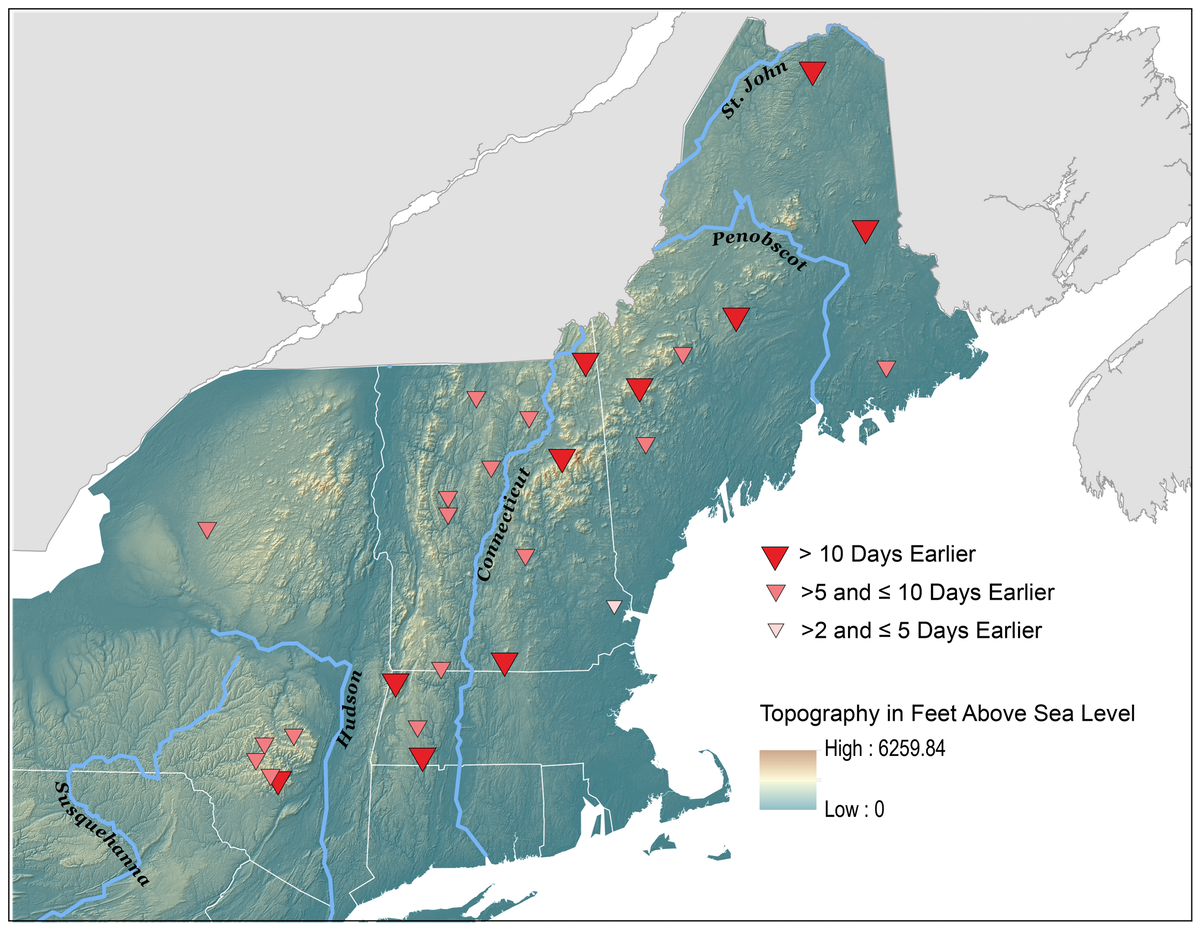 Changes in snowmelt-related streamflow timing for rivers, 1960-2014, show that snow is melting earlier in the year in the Northeast. USGCRP / NCA4

Snow as a Blanket

We study northern hardwood forests, which are dominated by sugar maple, yellow birch and American beech trees and span 85,000 square miles, from Minnesota and south-central Canada east to the Canadian Maritime Provinces and the northeastern U.S. These forests are famed for their vibrant fall colors. They generate revenue by drawing tourists, hikers, hunters and campers, and support timber and maple syrup industries. They also provide important ecological services, such as storing carbon and maintaining water and air quality.

When winter encroaches on this region, with temperatures often dipping well below freezing, every species needs insulation to cope. Tree roots and soil organisms like insects rely on deep snowpack for protection from cold—a literal blanket of snow. Even in sub-zero temperatures, if snow is sufficiently deep, soils can remain unfrozen.

Six decades of research from the Hubbard Brook Experimental Forest in New Hampshire—one of the longest-running studies anywhere—shows that winter snowpack is declining. Research conducted by other scholars indicates that if this trend continues, it will increase the likelihood of soil freeze-thaw cycles, with harmful effects on forest health.


How Acid Rain Transformed A Forest Into A Laboratory

For more than 10 years we have manipulated winter snowpack at Hubbard Brook to study the effects of projected climate change on northern hardwood forests. In early winter, we head outdoors after each snowfall to remove snow from our experimental plots. Then we analyze how losing this insulating layer affects trees and soil.

We have found that in plots where we remove snow, frost penetrates a foot or more down into the soil, while it rarely extends more than two inches deep in nearby reference plots with unaltered snowpack. And just as freeze-thaw cycles create potholes in city streets, soil freezing abrades and kills tree roots and damages those that survive.

This root damage triggers a cascade of ecological responses. Dead roots decompose and stimulate losses of carbon dioxide from the soil. Trees take up fewer nutrients from soil, accumulate the toxic element aluminum in their leaves and produce less branch growth. Nitrogen, a key nutrient, can wash out of soils. Soil insect communities become less abundant and diverse. 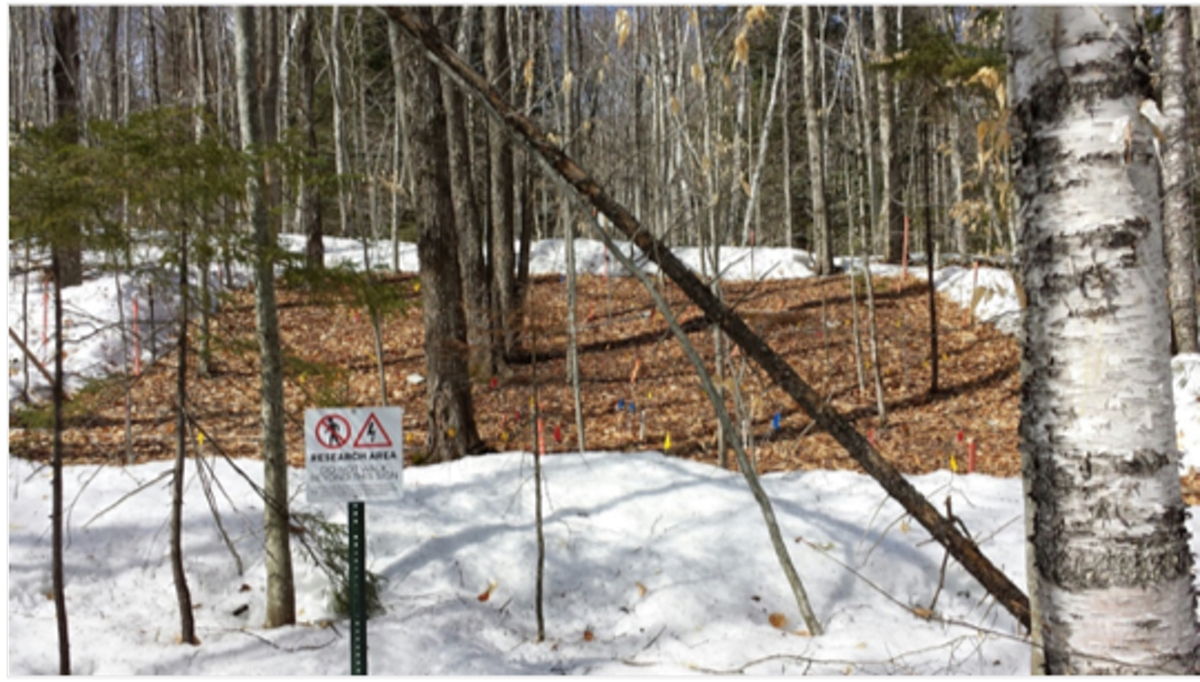 In our most recent paper, our climate and hydrological models show that the area of forests across the northeastern U.S. that receives insulating midwinter snowpack could decline by 95 percent by the year 2100. Today, 33,000 square miles of forests across northern New York and New England typically have snowpack for several months in winter. By the year 2100, this area could shrink to a patch smaller than 2,000 square miles—about one-fifth the size of Vermont.

This decline will undoubtedly harm the skiing and snowmobiling industries and expose Northeast roads to more freeze-thaw cycles. It also will significantly affect tree growth. 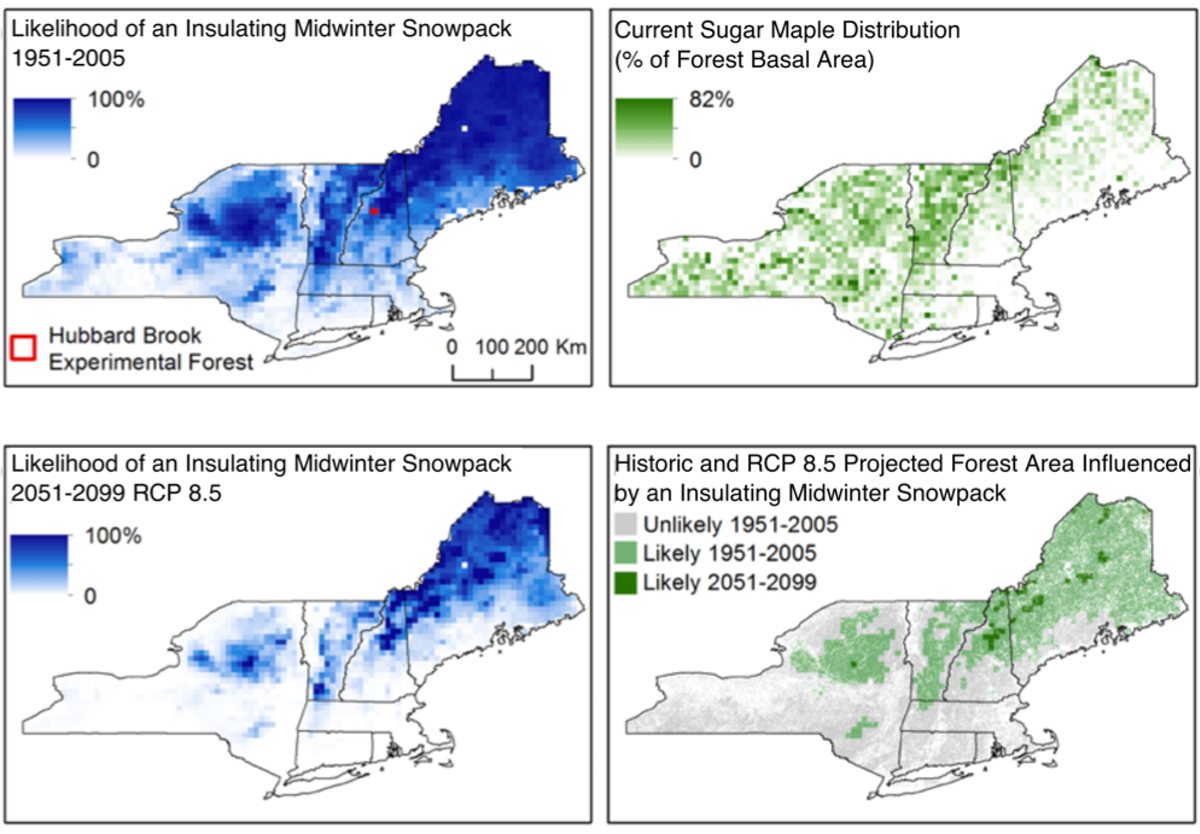 To assess the relationship between snowpack and tree growth, we used a specialized hollow drill bit called an increment borer to remove straw-sized wood cores from multiple sugar maple stems. Each of these trees experienced either natural winter snowpack or five consecutive years in which we removed early winter snowpack. When we sanded the cores and viewed them under a microscope, they revealed annual growth rings that we could use to understand how each tree responded to its environment.

Within just the first two years, our analyses showed a 40 percent decline in sugar maple growth from plots without snowpack. Growth rates remained depressed by 40 to 55 percent over the next three years. By contrast, there was no growth decline in the sugar maple trees in our reference plots where snow covered trees’ roots in midwinter. These results are comparable to root mortality that other researchers observed in an earlier snow removal experiment at Hubbard Brook.

At Hubbard Brook, sugar maples can account for more than half of annual forest biomass accumulation. Consequently, changes in climate that reduce winter snowpack and increase soil freezing could reduce forest growth rates in the northern hardwood forest region by 20 percent just through their impacts on these trees. But we know that yellow birch also suffers root damage in response to soil freezing, so our estimate for changes in whole forest growth is likely to be low. 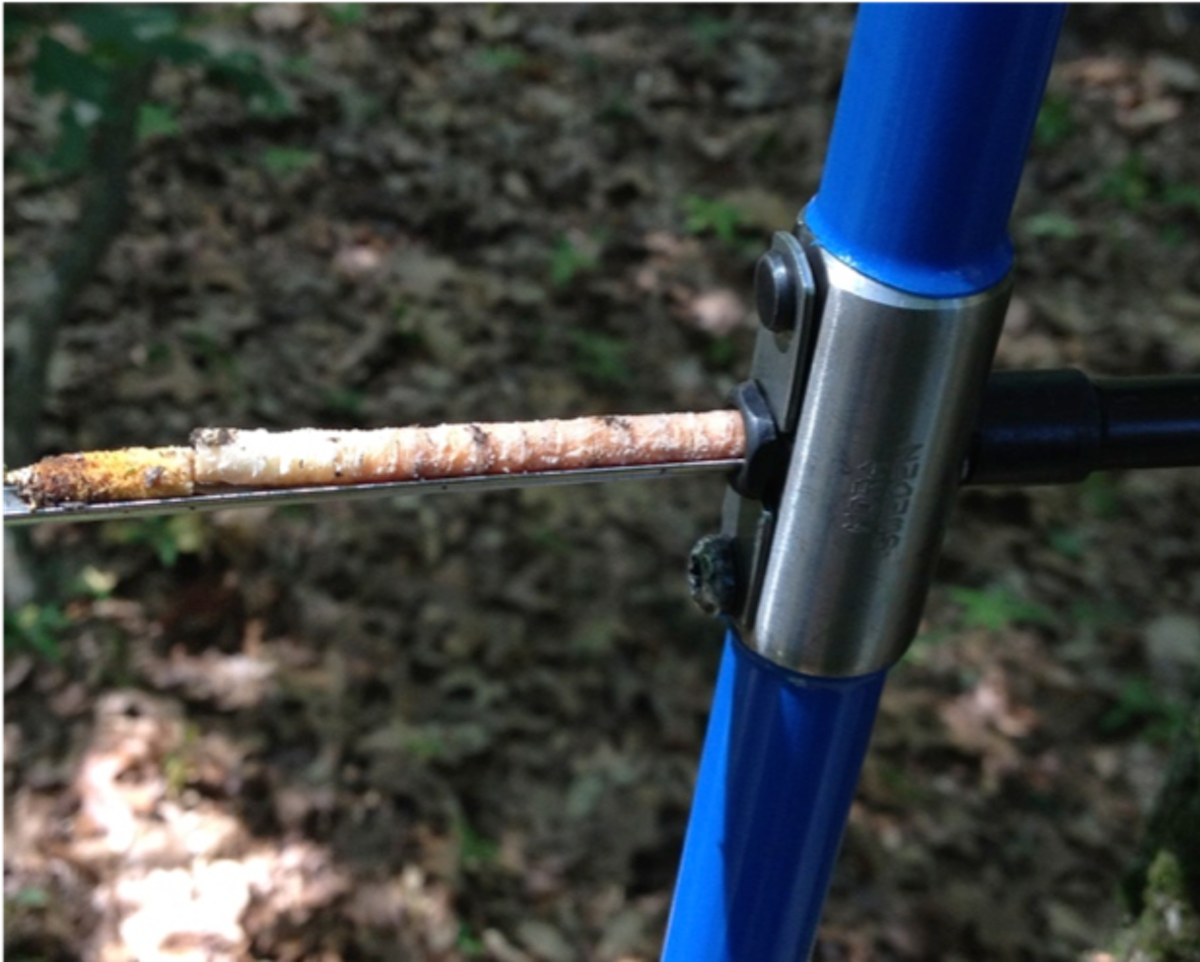 Could warmer growing season temperatures compensate at least partially for this damage by stimulating rates of tree growth, as some research suggests? Very little work has been done to understand how forests in seasonally snow-covered regions will respond to interactive effects of climate change across seasons. To help fill this gap, we established the Climate Change Across Seasons Experiment at Hubbard Brook in 2013.

In this project we use buried heating cables to warm forest soils by 9 degrees Fahrenheit (5 degrees Celsius) during the snow-free season from April through November. In winter we use a combination of warming with buried heating cables and snow shoveling to induce soil freeze-thaw cycles. Our results so far show that root damage and reduced tree growth caused by winter soil freeze-thaw cycles are not offset by soil warming during the growing season.

Our work shows how often-overlooked changes in winter climate can impact forest ecosystems. Losing snowpack can reduce forest growth, carbon sequestration and nutrient retention, which will have important implications for climate change and air and water quality all year-round.

Andrew Reinmann is an assistant professor at CUNY Graduate Center. Pamela Templer is a professor at Boston University.

Disclosure statement: Andrew Reinmann receives funding from the U.S. Environmental Protection Agency. Pamela Templer has received funding from the National Science Foundation, National Oceanic and Atmospheric Administration, United States Department of Agriculture, and U.S. Geological Survey. She is on the governing board of the Ecological Society of America.