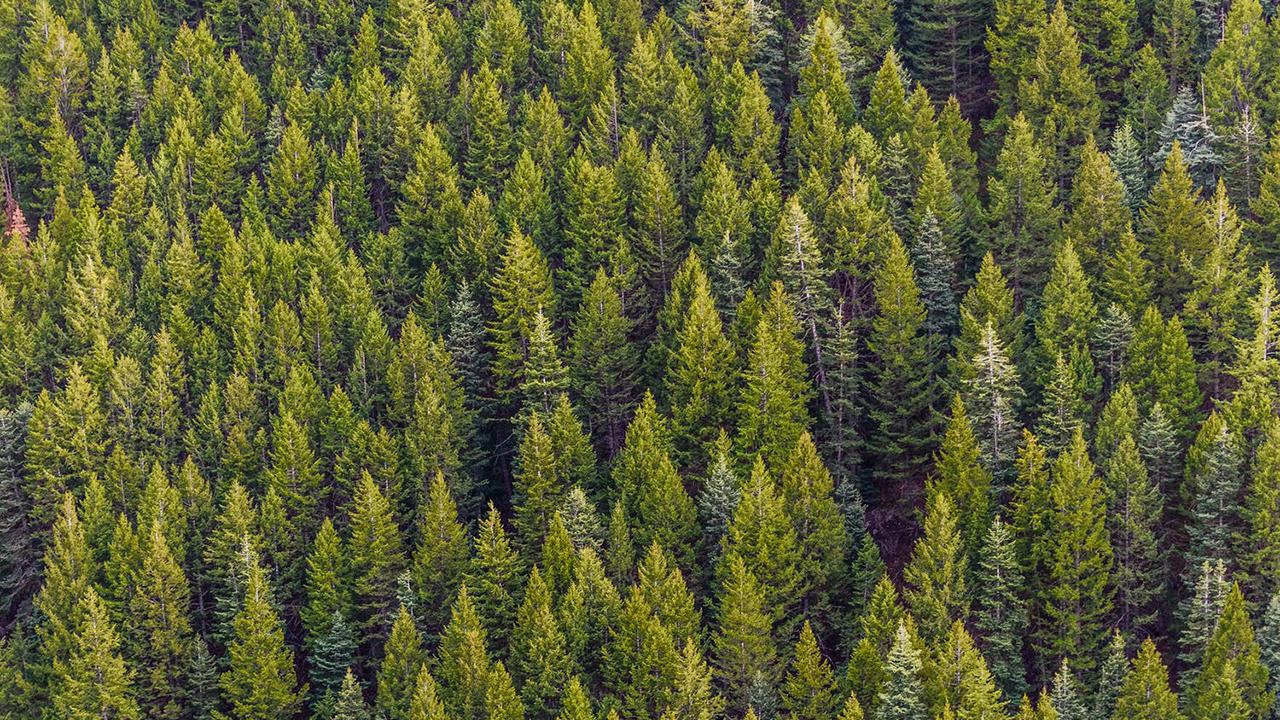 By Nancy Harris and David Gibbs

The world is getting a better understanding of just how important forests are in the global fight against climate change.

New research, published in Nature Climate Change and available on Global Forest Watch, found that the world’s forests sequestered about twice as much carbon dioxide as they emitted between 2001 and 2019. In other words, forests provide a “carbon sink” that absorbs a net 7.6 billion metric tonnes of CO2 per year, 1.5 times more carbon than the United States emits annually.

Unlike other sectors, where carbon makes a one-way trip to the atmosphere, forests act as a two-way highway, absorbing CO2 when standing or regrowing and releasing it when cleared or degraded.

Before now, scientists estimated these global “carbon fluxes” from the sum of country-reported data, creating a coarse picture of the role forests play in both carbon emissions and sequestration. With these new data that combine ground measurements with satellite observations, we can now quantify carbon fluxes consistently over any area, from small local forests to countries to entire continents. 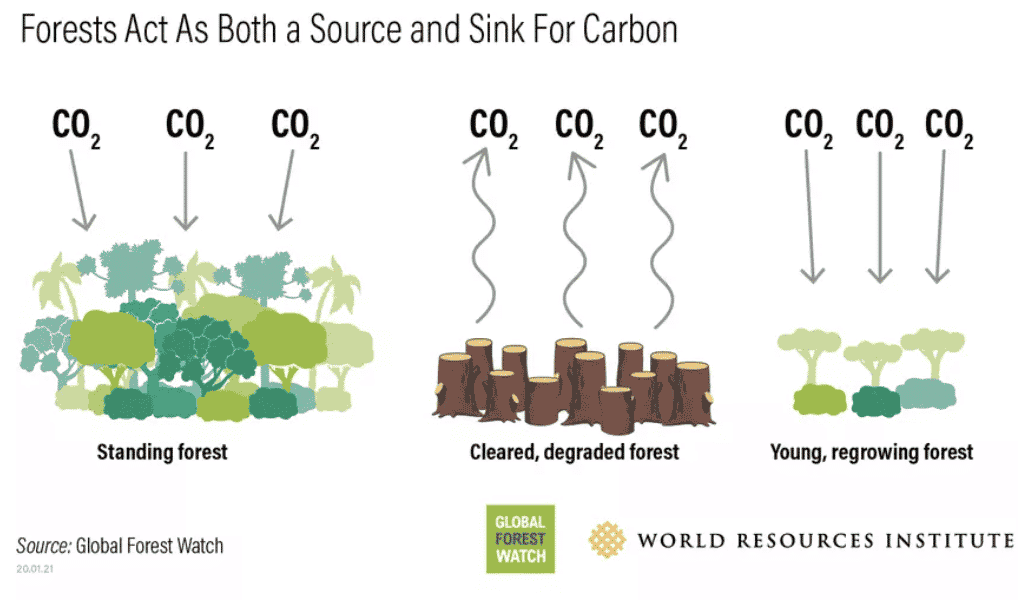 Forests are capable of both producing and absorbing carbon. World Resources Institute

Here’s a look at what else the new maps tell us about forests and carbon:

Only One Major Tropical Rainforest Remains a Strong Carbon Sink

Over the past 20 years, forests across Southeast Asia have collectively become a net source of carbon emissions due to clearing for plantations, uncontrolled fires and drainage of peat soils.

The Amazon River basin, which stretches across nine countries in South America, is still a net carbon sink, but teeters on the edge of becoming a net source if forest loss continues at current rates. The Amazon basin has experienced heightened deforestation in the last four years due to clearing for cattle pasture and degradation from fires.

Of the world’s three largest tropical rainforests, only the Congo has enough standing forest left to remain a strong net carbon sink. The Congo’s tropical rainforest sequesters 600 million metric tonnes more carbon dioxide per year than it emits, equivalent to about one-third of the CO2 emissions from all U.S. transportation.

Protecting the remaining forests in all three regions is critical to mitigating climate change. 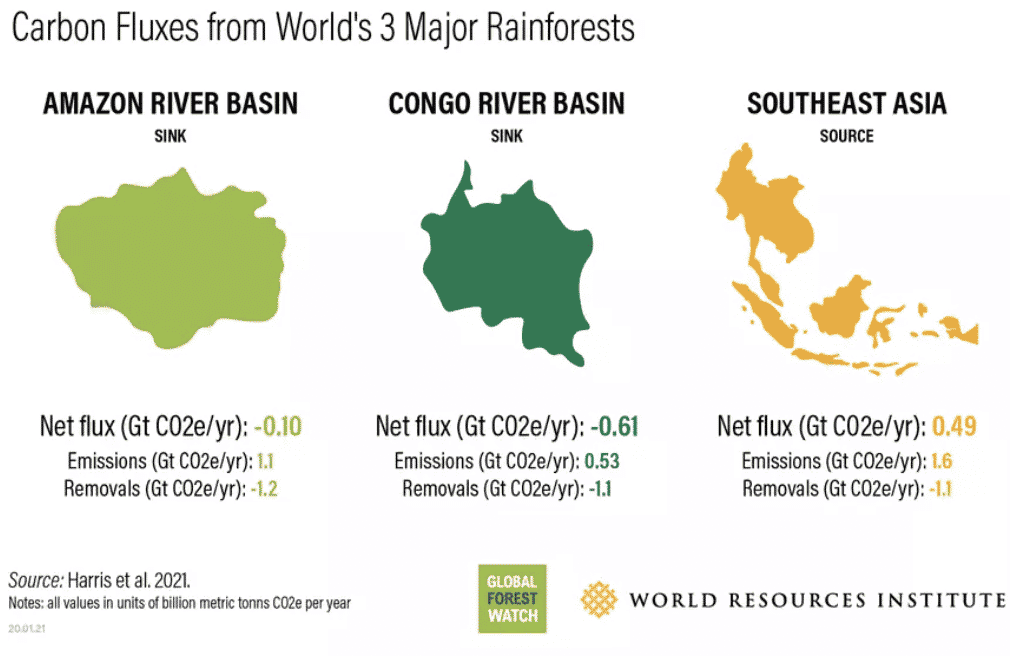 The precarious state of the Amazonian carbon sink highlights the need to protect the forests we have left in this region and elsewhere around the world. Protected areas and indigenous reserves are some of our most valuable tools in the climate action toolbox, combined with command-and-control policies.

The new map reveals that 27% of the world’s net forest carbon sink falls within protected areas. Looking at individual areas demonstrates just how effective these designations can be in keeping CO2 in forests.

For example, in Brazil, a stark contrast in carbon emissions is evident between the protected Menkragnotí indigenous reserve and the surrounding unprotected forest. Forests in the reserve continue to absorb approximately 10 million metric tonnes of carbon dioxide more from the atmosphere than they emit every year — equivalent to the annual carbon emissions from more than 2 million cars. The area surrounding the Menkragnotí indigenous reserve has become a net carbon source due to clearing for mining, pasture and soy.

Recognizing Indigenous Peoples and local communities as owners of their lands, and enforcing those rights, is a proven strategy to protect standing forests and enhance carbon stored in them. 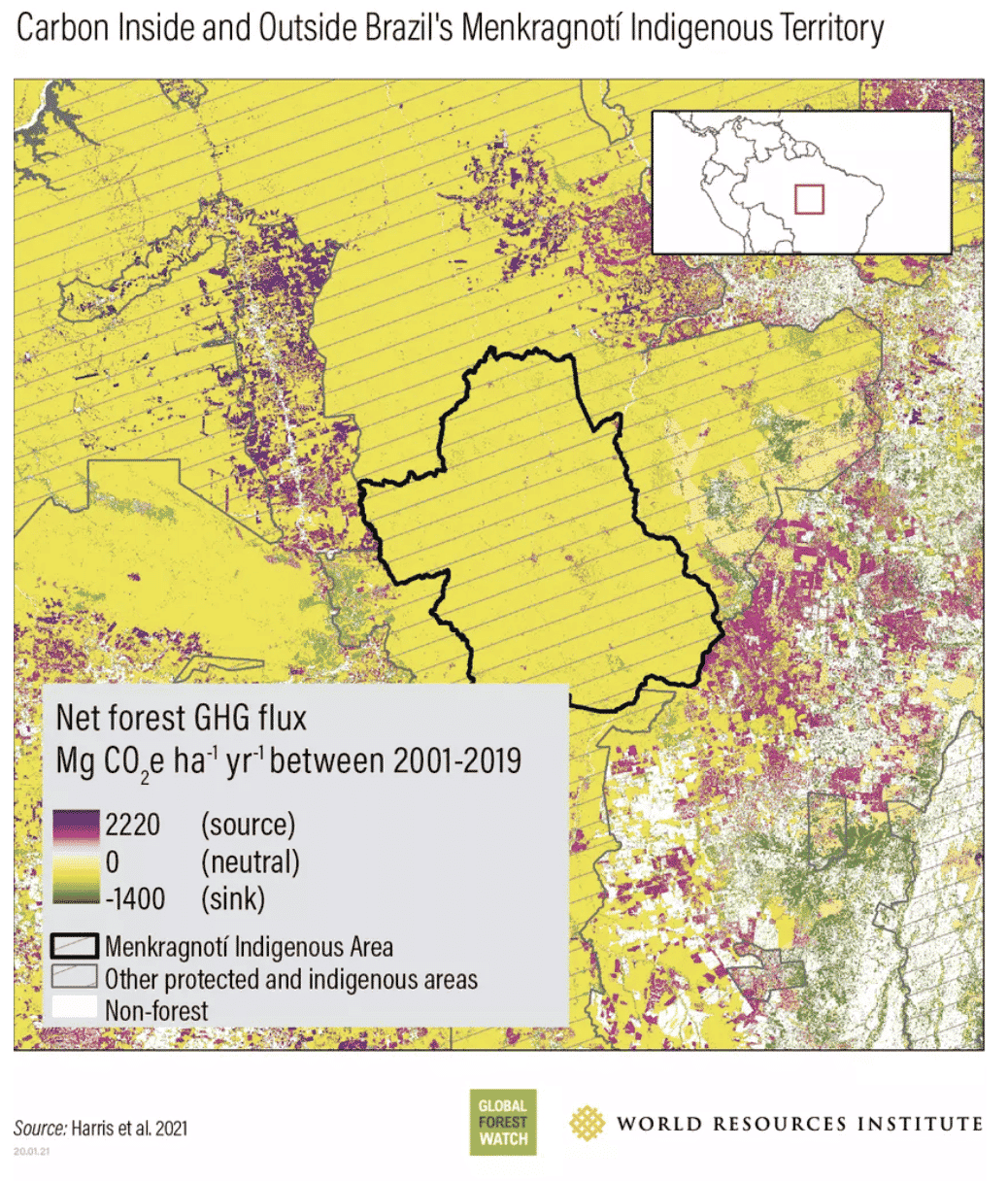 Nowhere is the bidirectional nature of carbon flux more apparent than in the world’s managed forests, which are cut and regrown to produce timber and concentrated mainly in the United States, Canada, China, Europe and Russia. In these managed forest areas, some patches of trees are harvested or thinned at planned intervals, leading to carbon emissions, while others are left to regrow and absorb carbon.

Ultimately, whether managed forests are carbon sources or sinks depends on how they’re managed — how much time elapses between harvest cycles, how much forest is cut, the age of the trees, and, importantly, the total area over which fluxes are calculated.

Zooming in on individual clear-cuts in the new map shows CO2 emissions from the abrupt loss of tree cover during harvest. But at the landscape scale, forestry becomes a patchwork of both CO2 emissions from harvest and carbon removals from previously harvested forests growing back. On the whole, most well-managed forests are net carbon sinks.

Logging in pristine primary forests, however, still represents a concern with respect to both climate and biodiversity. Unlike secondary forests or fast-rotation pine or eucalyptus plantations, harvesting in old-growth forests releases CO2 that has taken centuries to accumulate — carbon that, once lost, is irrecoverable in our lifetime. 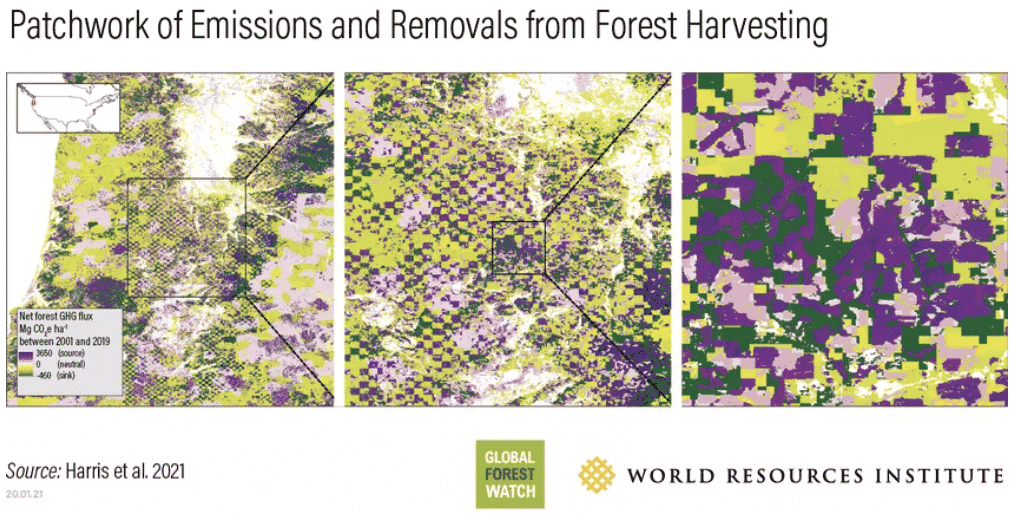 Overall, the data show that keeping existing forests standing remains our best hope for maintaining the vast amount of carbon forests store and continuing the carbon sequestration that, if halted, will worsen the effects of climate change.

While planting new trees (the right way) or letting them regrow naturally can play a role in mitigating climate change (and helping communities adapt to its effects), the new data show that forests that have sprouted up in the past 19 years represent less than 5% of the current global forest carbon sink.

Although important to give these young forests the chance to grow into old ones, protecting primary and mature secondary forests today is most important for curbing climate change.

With these new maps, we can identify with unprecedented detail those forests that are capturing and emitting the most carbon. The maps can also be continually improved as better data become available. This gets us one step closer to tracking progress toward reducing emissions from deforestation and identifying where forests are being successfully managed — and where they need more protection.