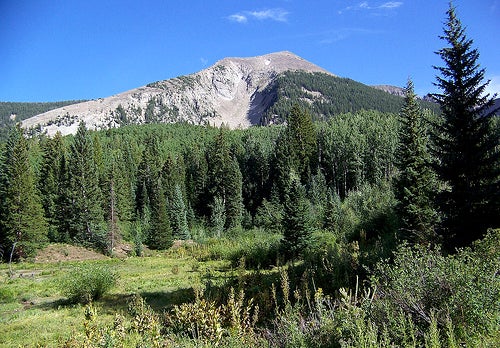 The U.S Forest Service on Nov. 7 ruled against conservation groups’ challenge to the Forest Service’s approval of a coal mine expansion within the Sunset Roadless Area 10 miles east of Paonia, Colorado. The coal lease expansion, together with loopholes built into the Colorado Roadless Rule last July, will allow corporate giant Arch Coal to bulldoze 6.5 miles of road and 48 natural gas drilling pads through 1,700 acres—nearly three-square miles—of wild, roadless forest.

The appeal, filed in September 2012 with the Forest Service’s Rocky Mountain Regional Forester in Denver, sought to overturn an August decision that affirming Arch Coal’s West Elk mine expansion into roadless lands that provide habitat for lynx, black bear, elk and goshawk. The conservation groups argued that the mine expansion violates laws meant to protect wildlife, air quality and forest lands, as well as the Colorado Roadless Rule.

“Smokey Bear has turned his back on Colorado’s natural, roadless lands,” said Ted Zukoski, staff attorney for Earthjustice, the public interest environmental law firm representing the groups. “Instead, Smokey has literally paved the way for a coal mega-corporation to destroy real bear habitat. The Sunset Roadless Area is a beautiful forest of aspen and giant spruce, beaver lodges and meadows, a home for elk and hawks.  This is a place the Forest Service should be protecting for all Coloradoans, not sacrificing to appease special interests.”

“We will be examining all of our legal options going forward,” Zukoski added.

The appeal was filed by Earthjustice on behalf of the WildEarth Guardians, High Country Citizens’ Alliance, Sierra Club, Rocky Mountain Wild and Defenders of Wildlife. The conservation groups won an appeal in February 2012, overturning the Forest Service’s initial approval of this expansion, when the Forest Service concluded that it had failed to explain weakened protections for lynx, bald eagles and measures meant to prevent landslides.

But when the Colorado Roadless Rule was adopted by the Obama administration in July in place of the National Roadless Rule, Colorado became subject to lower levels of protection for its roadless lands than for virtually all other roadless forest lands in the nation.

“The loopholes built in to the Colorado Rule leave 20,000 acres of pristine forest on Colorado’s West Slope open to destruction by coal mines,” said Matt Reed, acting director of High Country Citizens’ Alliance based in Gunnison County. “With this decision, the Forest Service rubber-stamped Arch Coal’s plan, and greenlighted use of these loopholes to bulldoze through wild forests.”

The Forest Service decision to permit the mine expansion could turn the Sunset Roadless Area, which is right next to the scenic West Elk Wilderness, into an industrial zone of well pads and roads, with an average of 16 wells pads—and two miles of road—per square mile. In addition to paving the way for bulldozing in the roadless area, the mine expansion decision allows continued uncontrolled methane pollution from the West Elk coal mine, one of the state’s single largest carbon polluters.

Although the West Elk coal mine is underground, safe mining there requires that methane venting wells be drilled above the mine. The West Elk mine spews millions of cubic feet of methane pollution every day. Methane is a potent greenhouse gas with 21 times more heat trapping ability than carbon dioxide.

Forest Service and U.S. Environmental Protection Agency data show the amount of methane vented at West Elk could heat a city about the size of Grand Junction. But the Forest Service has refused to require the mine to capture, burn or reduce any of the mine’s methane pollution.

“This is a lose-lose-lose proposition,” said Jeremy Nichols, climate and energy coordinator for WildEarth Guardians. “The public loses their mountain backcountry, loses millions of dollars from wasted methane and loses because of more coal pollution. The Forest Service needs to stand up to Big Coal, but now with a weaker Colorado Rule in place, this kind of destructive expansion could unfortunately happen again and again and again.”